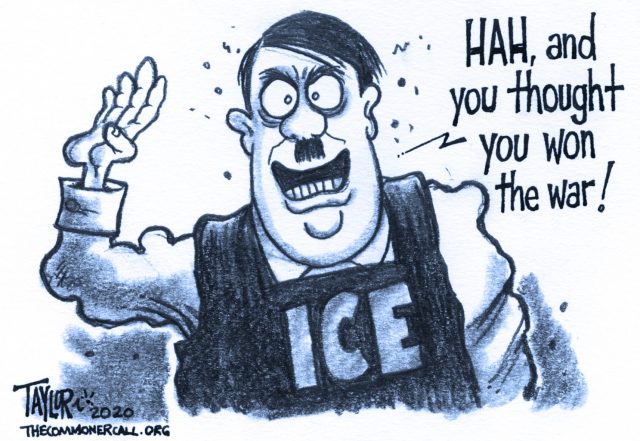 “Ah, so he was just doing his job? Where have we heard that defense before?”

[Editor’s Note: Just a quick reminder to members of the military and police: as the Nuremberg Trials after WW II made clear, doing something wrong simply because you are ordered to do so is no legal — or moral — defense. There is an understanding and legal requirement that soldiers and police refuse to carry out criminal orders. Don’t be a Nazi — be a good citizen first — listen to your conscience, not corrupt commanders. — Mark L. Taylor]

In a new Frontline documentary, a Border Patrol agent describes taking part in a pilot program to separate families nearly a year before the Trump administration officially unveiled the policy—saying that while he was unhappy about separating children from their parents, he and other agents were following orders.

Journalist Martin Smith interviews agent Wesley Farris in “Targeting El Paso” about the program Farris worked on in the summer of 2017 in El Paso, Texas. Agents were instructed to separate families as the administration tested the theory that doing so would deter people from trying to enter the U.S. at the border city.

“That was the most horrible thing I’ve ever done,” Farris tells Smith in an excerpt released ahead of the documentary. “You can’t help but see your own kids.”

Farris describes one experience in particular which caused him to ask his supervisor to take him out of the pilot program.

“It was a young boy. I think he was about two. The world was upside down to that kid,” Farris says. “So when the contractor tried to take him away, he reached for me and he climbed up on me again, and he was holding on to me. So that that one got me a little bit.”

“I said at that one, ‘I’m not doing this anymore. I won’t do it,'” he tells Smith. “I went back to the supervisor and I told him, ‘Don’t assign me to do that anymore.'”

Farris “wanted to” take his complaint up the chain of command, he says, but the Border Patrol agents who were separating families were required to do as they were told.

“I mean, none of us were happy about it,” Farris says. “We were all told to do this.”

Journalist Brooke Binkowski suggested in a tweet that Farris’s defense mirrored that of numerous war criminals who have invoked the “Nuremberg defense,” infamously used by Nazi official Adolf Eichmann in the Nuremberg trials after World War II.

“So he was just doing his job? Where have we heard that defense before?” tweeted Binkowski.

““I mean, none of us were happy about it,” Farris says. “But everybody around me was just doing exactly what… We were all told to do this.””

Ah, so he was just doing his job? Where have we heard that defense before?

The Trump administration announced six months after the pilot program ended that it would begin separating families on a much larger scale, eventually separating more than 5,000 children from their parents or guardians at the border.

As the program rapidly drew international outrage in the summer of 2018, then-Homeland Security Secretary Kirstjen Nielsen scoffed at the suggestion that the administration was separating families as a deterrent to asylum-seekers and migrants—but “Targeting El Paso” presents new evidence that it was doing just that.

“It aligned with my experience, in the times where we applied a consequence to people who cross the border illegally, we got less of them crossing the border illegally,” Ronald Vitiello, former acting director of U.S. Immigration and Customs Enforcement (ICE), tells Frontline. “And so when zero tolerance is discussed as a way forward, we knew that it was going to be a benefit to us.”

Link To Story And 1-Minute Video

A senior employee at a for-profit immigrant detention center in Nevada was active on the neo-Nazi site Iron March and aspired to establish a white nationalist chapter in his area.

Travis Frey, 31, is currently employed as a captain at the Nevada Southern Detention Center, which is run by private prison behemoth CoreCivic and contracted with ICE.

Frey joined Iron March in 2013, and posted at least a dozen times between 2016 and 2017 while he was working as head of security at a CoreCivic jail in Indianapolis, which was also authorized to house detainees on behalf of ICE.

The archives of the now-defunct website were leaked online in November, offering a glimpse into the early organizational efforts driving the modern, international white nationalist movement. The foundations of violent neo-Nazi groups such as Atomwaffen were established in Iron March chats, and white nationalist leaders like Matthew Heimbach have said they were radicalized by the time they spent on the site.

On Iron March, Frey used the screen name “In Hoc Signo Vinces,” a Latin phrase that’s used by military outfits around the world, and by universities, and was the title of the American Nazi Party’s manifesto. VICE News was able to identify Frey, who served in the Marines between 2006 and 2008, through some of the personal information he provided on Iron March …