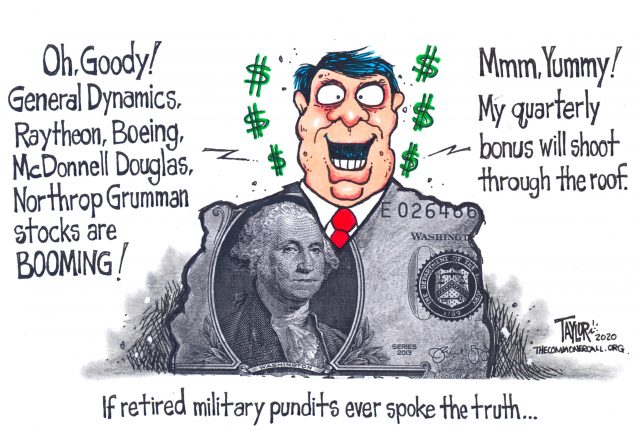 But there is much, much more to the general than that bland, anodyne descriptor. A quick search found some very important information about Keane. Media Matters notes:

“Jack Keane is a retired U.S. Army general and a longtime Fox News military analyst. He also serves on the board of directors of the defense contractor General Dynamics.”

The Media Matters website links to past Fox News interviews with the general heaping praise on Trump and calling for war on Iran. Between that and his potential (highly probable) personal financial interest with General Dynamics in the U.S staying in a constant state of war those ties are essential background information to properly assess Keane’s comments. Yet, NPR and Innskeep chose not to include that essential background information in the introduction of the general and he — of course — was not asked any questions relating to that potential conflict to interest.

Just to be clear, General Dynamics is in the business of building bombs and missiles and military avionics and, yes, drones … like the weapon used to kill Soleimani.

If NPR wants to include Keane’s opinion, fine, but alerting NPR listeners to the potential personal and financial conflicts of interest of this ‘expert’ should be included in the introduction to the interview.

Unfortunately, NPR is far from alone in not reporting pro-war pundits’ financial conflicts of interests with war contractors. From Fox News to MSNBC you will never hear honest reporting on the sticky financial ties of their somber-voiced ‘oh, so serious’ retired military and former intelligence agency pundits.

These financially polluted political pundits played a critical role in escorting the nation into the disastrous — and almost two-decade long — unwinnable Afghanistan and Iraq wars. Our supposed free corporate media — who are themselves often owned by corporations tied to the weapons industries — goosed along the rush to war.

The sales pitch for war comes in ways large and small. For example, on Sunday (2/4), another NPR report interviewed a conservative think tank consultant who worked with the Trump administration and referred to assassinated Soleimani as having “passed away”.

Put aside whether or not the action was correct or justified. The correct words to use in describing what happened with Soleimani would be words like: assassinated; killed; blown up etc. He did not “pass away”. When the vocabulary of war is neutered — softened — it is a step toward making more war more acceptable; less real. In our most recent wars “enhanced interrogation” became the mush word covering up the reality of a brutal torture program that often victimized many innocents and produced little useful information.

Pay attention to the massaging of the language. It’s all part of what Edward S. Herman and Noam Chomsky described in their 1988 book on the corporate  media, Manufacturing Consent: The Political Economy of the Mass Media. Less than neutral pundits is another way of manufacturing consent for disastrous policy.

The fact this happening just a few weeks after publication of the Washington Post “Afghanistan Papers” investigative series documenting 17 years of bipartisan lying about the military failure in Afghanistan — and media enabling of that tragedy — is beyond ironic.

‘If You Are Wondering Who Benefits’: Weapons Makers See Stocks Surge As Trump Moves Closer To War With Iran

Almost immediately after the United States assassinated Iranian General Qassem Soleimani in a drone strike Thursday night, major American weapons manufacturers and defense contractors—from Northrop Grumman to Lockheed Martin to Raytheon—saw their stocks surge as investors sensed the growing likelihood of another costly and deadly war in the Middle East.

As the Los Angeles Times reported, “Even as the broader Standard and Poor’s 500 index lost ground, the S&P Aerospace & Defense Select Industry index climbed 1.8% on Friday.”

According to the Times:

“Northrop Grumman Corp. stock jumped 5.4%. Based in Falls Church, Va., Northrop Grumman makes such aircraft as the B-2 bomber and the upcoming B-21 bomber and is the sole bidder to build the next generation of intercontinental ballistic missiles.

The surge in defense stocks was readily highlighted on corporate television programs like Fox Business and in publications like Investor’s Business Daily, which noted that “Northrop Grumman (NOC) and Lockheed Martin (LMT) were big winners in Friday’s stock market trading, along with Raytheon stock.”

Citigroup analyst Jonathan Raviv wrote Friday that “if Middle East conflict were to ratchet up…we think it could be tougher for Democratic Party electoral candidates to argue against a stronger defense budget in 2020.”

“As is always the unfortunate case, defense stocks tend to benefit from perceptions of heightened risk and the potential for geopolitical conflict,” Raviv added.

Rep. Ro Khanna (D-Calif.), who along with Sen. Bernie Sanders (I-Vt.) unveiled legislation to stop Pentagon funding for U.S. military action against Iran, tweeted late Friday that “if you are wondering who benefits from endless wars, take a look at how stocks for weapons manufacturers began to rise as soon as Soleimani was killed.”

Trump critics and peace advocates watched in horror Thursday night and Friday morning as some of the top architects of the Iraq War took to the corporate media to spin a narrative aimed at retroactively convincing Americans that the killing of Iranian military official Qasem Soleimani was essential to the safety of the U.S.—a replica of the run-up to the Iraq War nearly two decades ago.

Following reports that President Donald Trump ordered the airstrike that killed Soleimani, the major general of the Iranian Islamic Revolutionary Guard Corps, former George W. Bush administration officials were among those who media outlets called on to make a case for the act.

“No voices calling for peace. No voices critical of empire. Just establishment media and current and former Pentagon officials who feed off the trillion-dollar war machine.”

Former White House Press Secretary Ari Fleischer suggested, as conservatives did in 2003 regarding Iraqi civilians, that Iranians would likely celebrate the killing of Soleimani—presuming to speak for demonstrators who have decried economic hardships in the face of U.S. sanctions and government mismanagement in recent weeks.

“The Iranian people have been leading a revolution, a rebellion against their government, knowing what a dictatorship it is,” Fleischer told Fox News. “So I think it is entirely possible this is going to be a catalyst inside Iran where the people celebrate the killing of Soleimani.”

Journalist Judd Legum wrote that Fox is “getting the band back together” as right-wingers rework their 2003 claims to apply to Iran, joined by Trump administration officials like Secretary of State Mike Pompeo.

Pompeo appeared on CNN Friday to claim that Iranian civilians “will view the American action last night as giving them freedom”—even as thousands of people took to the streets in Tehran and other cities in Iran to protest the Trump administration’s actions.

A number of observers denounced cable news networks for offering a platform to pro-war extremists while ignoring the voices of peace advocates and critics.

“Former Bush appointees who thought the 2003 invasion of Iraq was a good idea?” tweeted journalism professor and Guardian columnist Christian Christensen. “Maybe not be the most objective commentators on US interests in the region.” …