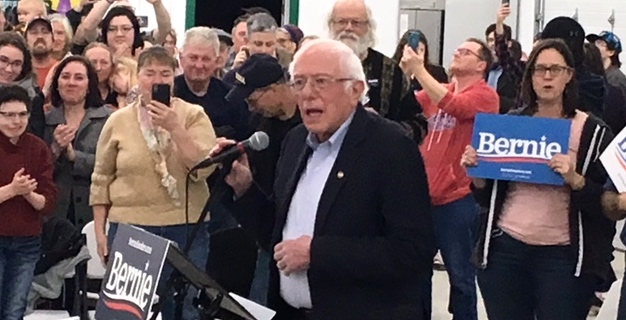 Last Friday my pal Tom Crofton and I headed off to Decorah, Iowa to help with the Bernie Sanders rally that evening. The event was at the Winneshiek County Fairgrounds in a large, cavernous room decorated with 4-H quilts from area clubs. One proudly proclaimed: “We Pledge our … Hearts, Hands and Health.”

Looked like just the right spot for a Bernie campaign rally.

I will confess that when I walked in about 90-minutes before the event was to begin and saw a couple hundred chairs set up around the speakers podium I wondered if all the seats would be filled. Well, a couple hours later there was no doubt. Not only was every seat filled, it was standing room only in rows four and five deep. Organizers reported about 500 people showed up.

I’ve seen Sanders once before during the 2016 primary campaign and he is a hell of a political rally speaker. Decorah was no exception as Bernie blistered through his take down of the corrupt economic set-up that condemns growing numbers of families to lives of stunted opportunity and economic hardship; lives where basic necessities like housing, health care and a decent education for their kids are growing scarce for a majority of Americans.

Unlike most democratic candidates who need to curry favor with the corporate and wealthy donor class while making some empty kabuki nod toward the concerns and stresses of working class voters, Bernie is unafraid to use words like “revolutionary” and “class” and “worker”. He even calls for more labor unions! He chuckles at being called a radical, noting, “I’ll tell you what’s radical; giving tax breaks to billionaires is radical.”

Classic Bernie and messaging the nation needs to hear. And what’s nice about Bernie is you don’t go into one of his rallies wondering what the hell his position on, say, health care is this week, like you have to do with most other candidates who dare not put cream in their coffee without triple-checking the latest polling (note to Mayor Wine Cave). Bernie’s message has been consistent for his entire political career, from mayor of Burlington, Vermont to the United States senate.

With Bernie’s recent lead in campaign donations, and rising poll numbers, the crotchety, dottering, near-sighted old DNC and media establishment are a tad rattled and we are about to see a wave of negative Bernie attacks, lies and convenient corporate media news black outs.

“When you see the establishment getting nervous — and they are –they realize working people are standing up and saying, ‘enough’,” Bernie said, adding “The corporate elite cannot have it all. This country belongs to us all. …Brothers and sisters, we have a fight on our hands.”

By the energy in the hall, it sounded like the brothers and sisters that night are up to the fight.

Hmm, could the pundits be telling us lies?

One thing that stood out to me was the crowd, and not just it’s size. It was the make-up. At 67 I expected to be surrounded by a bunch of college students and millennials. After all, isn’t that what the media is constantly telling us about Bernie supporters and the reason we are supposed to hand our future and evaporating security over to some “electable, tested” party has-been like Joe Biden. I mean hell, the pundits declare, what do kids know, and, besides, they don’t even vote. Right?

Well take a look at this photo from Friday’s rally… 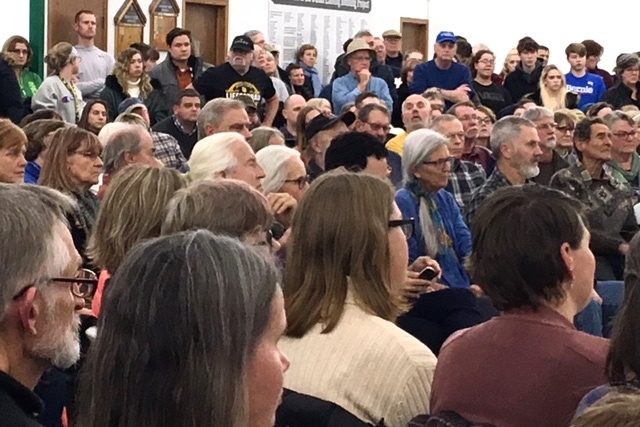 It doesn’t take a microscope to see a lot of gray hair and wrinkles sprinkled through the crowd of 500. In fact, what I saw last Friday was a completely representative collection of folks you’d see walking down the street in any small Iowa or Wisconsin town. While the on-the-ground campaign field staff in Decorah was delightfully young, that is true of all political campaigns. After all, few of us with mortgages and a pesky case of sciatica and the need to sleep in a bed instead of crashing in a sleeping bag on someone’s couch for weeks on end aren’t exactly in a place to take a year off to work a campaign.

The real challenge ahead

Bernie is the first to acknowledge the corruption and entrenched interests running the nation will not be easily subdued. But he is not one for hand wringing and “what-iffing” the chances of change and reform. As he often does, Bernie reminded the crowd of  Nelson Mandela’s observation that: “It always seems impossible, until it happens.”

Yes, the billionaires and corrupt corporate hacks, lobbyists and grifters spoon-feeding most of our politicians are a challenge, but, Bernie notes, “The tougher fight is taking on the limits of our own imaginations.”

After addressing a number of concerns from dropping life expectancy to climate crisis and Trump possibly leading us off the cliff into the cess pool of yet another useless corporate war for oil, Bernie noted that, “We have an agenda that meets the needs of the people, not the 1%.”

And with the age spread of supporters gathered in Decorah last Friday, the campaign for the future of young and old alike is drawing upon the strengths of all.

(Commoner Call photos by Mark L. Taylor, 2020. Open source and free for non-derivative use with link to www.thecommonercall.org )

My decision to divide the Democratic Presidential Primary field with an issues cleaver has produced a finalist. Early on I made the decision that at a minimum we need a candidate with a single payer plan that replaces private insurance, and a massive federal program to reverse the climate catastrophe. The only candidate with a comprehensive plan for the former is Bernie, and his Green New Deal and deeply-expressed concern for the existential dilemma of the climate crisis is considered the most comprehensive to date.

Further Bernie’s call for political revolution is exactly the means we need to turn the tide of corporate dominance over our political lives, and restore the democracy we say we have.

The details of his plans are as worker-empowering as FDR’s New Deal, which established the strongest middle class in history.

To be clear, confronting the power of the military industrial complex, Big Pharma, the insurance industry, the fossil fuel industry, and other corporate dominance will not be easy. No other candidate is so clear in vision and solid in commitment, in my view.

After attending the Decorah Iowa event I was inspired to think about our own backyards. The official campaign is operating on a 5-state-first strategy. Our primary is April 7th, so we are not in the priority group. For those interested, the berniesanders.com website will link you to phone numbers in their target areas for phone banking.

I propose we develop a loose local grassroots organization to share ideas, information and contacts to prepare the ground for the campaign’s entry into our state. My personal interest is to organize blue collar neighborhoods and trailer parks. I have spent a great deal of time in these areas in past elections, and this time I think Bernie has the clout to get some of these folks to vote. I would like to see us go beyond traditional leafleting into a community organizing approach. These are long haul efforts and the primary is only three months away, but we can begin that effort now

We can set up a regional clearing house grassroots style coordination to share ideas and support each other’s actions until the focus of the campaign comes here.

If you want to be part of this email me at tcrofton@countryspeed.com