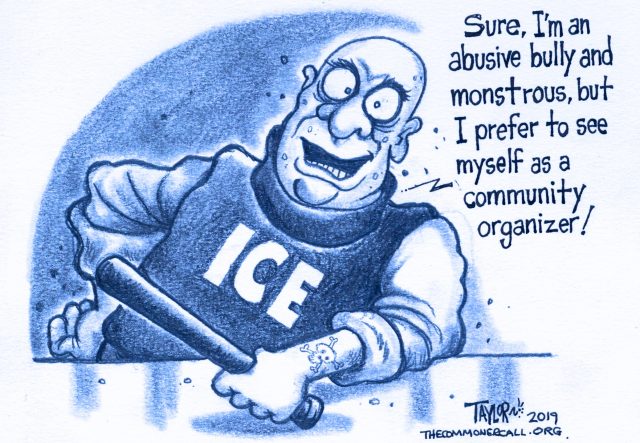 With conditions facing immigrants and those seeking asylum in the US becoming increasingly horrific, US President Donald Trump gloated over the weekend that the Democratic Party has bowed to his rabid anti-immigrant policy by voting to approve billions of dollars in new funding for his border wall.

In a speech to a meeting organized by the far-right student group Turning Point USA in West Palm Beach, Florida, Trump boasted of the overwhelming bipartisan approval of the $738 billion National Defense Authorization Act, which, according to the White House, “enables more than the $8.6 billion amount included in the budget request to be dedicated for the President’s border wall, including nearly $1.4 billion in direct funding.”

While dropping opposition to Trump illegally diverting funds from the Pentagon budget for the border wall, the legislation was also stripped of a provision that would have limited the role of military troops in hunting down and imprisoning immigrants at the border. The Pentagon is maintaining a permanent deployment of 5,500 National Guard and active duty soldiers on the US southern border.

Such atrocities are not merely a matter of negligence, but rather are perpetrated by design as part of a fascistic and vindictive immigration policy that exposes the class hostility of both major US parties to immigrants and the working class as a whole.

Indeed, even as it proceeds with its impeachment of Trump based on the narrow and reactionary charge that he has been insufficiently aggressive against Russia by delaying military funding for the right-wing Ukrainian government, the Democratic Party is marching in lock step with the White House on the buildup for war, the attacks on the working class and the brutal treatment of immigrants and refugees.

As the Democrats and Republicans close ranks, conditions on the US-Mexico border and in detention centers for immigrants have become increasingly hellish, constituting a violation of international laws guaranteeing the right to asylum, and a shameful crime against humanity.

Since coming into office in 2017, the Trump administration has attempted to impose what it calls a “zero tolerance” policy on the US southern border by creating conditions for immigrants that are so cruel and punishing that they would deter the arrival of those fleeing violence, political repression and grinding poverty created by a century of US imperialist domination and decades of US-backed dictatorships and civil wars that claimed the lives of hundreds of thousands in Central America.

The most infamous of these was the separation of children from their families at the border, locking them up in cages. While a federal judge struck down the policy last year, the Trump administration and the Border Patrol are continuing to separate families, using loopholes in the ruling. This includes invoking the false pretense that they are protecting the safety of children by ripping them out of the arms of parents deemed “unfit,” or of other relatives, including grandparents, aunts, uncles and older siblings, with whom they have arrived at the border.

The most sweeping attack, however, has come in the form of the grotesquely misnamed “Migrant Protection Protocols” (MPP), or Remain in Mexico policy, that was implemented at the beginning of this year. It has turned back more than 60,000 asylum seekers and other migrants trying to enter the US, forcing them to wait across the border in Mexico for their cases to come before a US immigration judge.

Squalid refugee camps have grown up in the border cities …

Wake Up, They Are Getting Ready To Come For You: Mistakenly Unredacted Document Reveals ICE Ramping Up Training For ‘Urban Warfare’

The U.S. Immigration and Customs Enforcement agency failed to redact a document for at least the second time in less than a month after trying to redact the location of a future “urban warfare” training facility that is expected to include “hyper-realistic” simulations of homes, hotels and commercial buildings in Chicago and Arizona.

On Tuesday, ICE published an acquisition form for the procurement of “hyper-realistic training devices” for a new training facility for its expanding Special Response Team (SRT) program on the Federal Business Opportunities (FBO) website.

The immigration agency had sought to redact the location of the new training facility, but failed to do so properly. The agency, which has made this kind of mistake previously, appears to have a systemic information-security problem.

Among those training devices will be a “hyper-realistic props/design” that simulates “residential houses, apartments, hotels, government facilities and commercial buildings,” along with other training configurations.

In this case, Newsweek was able to simply copy and paste the document’s contents into a word processor and quickly establish that the facility would be built at the Office of Firearms and Tactical Programs’ (OFTP) Tactical Operations Complex (TOC) at Fort Benning, Georgia, a U.S. Army post used to prepare soldiers for combat.

It is unclear why ICE sought to redact the location of the training facility, as it was previously named in a document obtained by Quartz.

In addition to failing to properly redact the location, however, ICE also sought to withhold information that the Army post would be getting an expansion, with up to 50 buildings expected to be added to the site. …