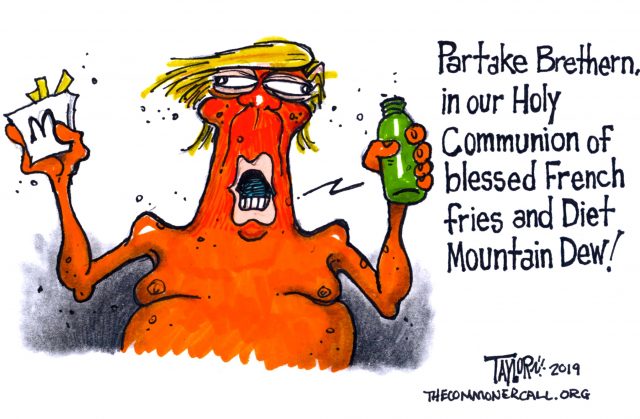 “For false christs and false prophets will arise and perform great signs and wonders, so as to lead astray, if possible, even the elect.” —Matthew 24:24

Just when you thought the soon-to-expire year had long since reached peak stupidity, Newsweek published a piece that set a record for preposterous ideas, confidently but incoherently argued.

At first glance, it also appeared to demonstrate the lengths the supposedly mainstream media will go in giving equal time to fringe points of view—what is pretentiously called the national conversation. But it may actually be the result of a more ambitious agenda than just a wooly-headed editorial policy.

The piece, by Christian fundamentalist media producer Mark Joseph, argues that President Donald Trump’s vulgar, immoral, and nasty behavior, allegedly the antithesis of what every true Christian believes, is not a flaw to be embarrassed about, not a blot over which the faithful must change the subject with a nervous cough, but a shiny feature to be celebrated.

According to Joseph, Trump’s jackassery will bring the heathenish young folk back to the flock of their parents’ Christian fundamentalism, a faith they had fallen away from because of its humorless fuddy-duddyism and moral rigidity. As a producer of such daringly avant-garde fare as No Safe Spaces and Letters to God, Joseph claims considerable expertise in what the kids are up to these days.

There are some ambiguities in his thesis, however. Is Joseph saying that Trump, by the force of his magnetic personality, will send young people thronging back to the faith? Or is he really saying that by unashamedly embracing Trump without any mealy-mouthed equivocation about his being a “flawed messenger,” the fundamentalist older generation will suddenly seem sufficiently hip to their wayward offspring: that the elders’ entreaties about getting right with the Lord will sound attractive and coolly with it.

Yet a third possibility also presents itself: Joseph may be just openly expressing the sort of cynical pragmatism long practiced by religious fundamentalists even though they won’t admit it. In this view, rather than insisting that “character counts” (a phrase we heard incessantly from fundamentalists during the Clinton impeachment), such sob-sister stuff can be safely ignored in the pursuit of worldly (meaning political) power:

“[W]hile many older Christians have been able to set aside purity tests in the case of Trump, their children and grandchildren are reinventing the idea that character trumps content (no pun intended).

“This inability of some young evangelicals to embrace a sort of realpolitik — an acknowledgement that sometimes life in a fallen world means that results they embrace come in deeply flawed packaging — led many of them to declare themselves Never Trumpers — even as the president they loathed appointed hundreds of judges and two Supreme Court justices who shared their values and could conceivably be advancing them for the next half-century.

“To be sure, there is something ironic about devout churchgoers embracing a leader who has flouted conventions of morality, but there is equal irony in their children exhibiting a kind of neo-fundamentalism that deems the personal moral purity (or lack thereof) of the messenger to outweigh the work of that messenger.”

Since the author mentions realpolitik, we might as well get with the program. Hey, Hitler built the Autobahns—as well as a “beautiful wall” known as the Siegfried Line. And he sure wasn’t appointing any mush-headed liberal judges.

The argument Mark Joseph is advancing isn’t new, just a little more brazenly stated than usual. In the early 1970s, a then-obscure segregationist preacher named Jerry Falwell, Sr., a man of God after Joseph’s heart, played a similar game. Horrified by federal government policies against legally enforced racial separation, Falwell compromised with Mammon and fused with the Republican Party; in a decade or so, like a parasite that eventually assimilates its host, he took over the Party of Lincoln.

Joseph is merely expressing Falwell’s guiding spirit, along with a few would-be hip references to the kind of pop music that Falwell and his contemporaries always condemned as the devil’s work.

It makes one wonder what made an ostensibly mainstream site like Newsweek publish the musings of this retread Pat Boone who thinks heavy metal, if you look at it just right, is the perfect way to bring God’s Word to the unbaptized. Never mind that the whole concept of Christian rock is the very definition of frozen embarrassment, like seeing one’s grandparents desperately trying to act cool.

And never mind that Joseph’s thesis is belied by painfully obvious facts. Young people are the least likely of any age demographic to support Trump. They are leaving Christian fundamentalism in droves, often because of their elders’ political hypocrisy.

So why would their parents’ cheerful acceptance of the fact that Trump is an amoral liar cause kids to be any more attracted to a man they already rejected because he was an amoral liar?

A much bigger story

It is also noteworthy that less than a week before Joseph’s piece appeared, an editor for Christianity Today wrote a viral op-ed denouncing Trump as an affront to Christian values. At least 2,000 people cancelled subscriptions as a consequence—but the publication gained about 5,000 new subscribers, mainly from a younger demographic.

On closer inspection, Newsweek’s running the piece may be more than silly mainstream liberal indulgence of all points of view. In 2013, when Newsweek was hemorrhaging money, owner Barry Diller sold it to IBT Media. This media group is connected to Jae Hyung (aka “David”) Jang, a South Korean leader of a Christian cult called “the Community.”

Yes, it appears we could be dealing with another version of the late Sun Myung Moon, the founder and moneybags behind the Washington Times. Just like Moon, Jang apparently regards himself as the second coming of Christ, and, similar to the deceased messiah of the Washington Times, Jang is said to exert a dictatorial control over his flock. Also, in a fashion reminiscent of the editorial turmoil at the Washington Times over the years, Newsweek reporters have been fired for taking a critical look at their ownership.

The relation between God and Mammon is a strange one. Among the signs and wonders St. Matthew might have warned us about is the possibility of an ostensible flagship of the liberal media coyly fronting the agenda of an authoritarian cult. 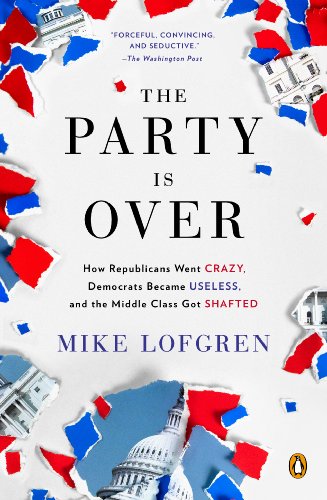 (Mike Lofgren is a former congressional staff member who served on both the House and Senate budget committees. His books include: “The Deep State: The Fall of the Constitution and the Rise of a Shadow Government” and “The Party is Over: How Republicans Went Crazy, Democrats Became Useless, and the Middle Class Got Shafted.“)