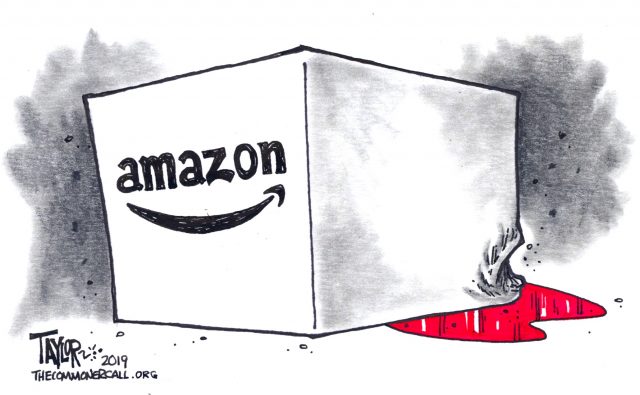 When disaster struck at one Indiana warehouse, Amazon’s economic might may have helped the company evade accountability.

By Will Evans
Reveal / Center For Investigative Reporting (11/25/19)

When Candice Dixon showed up for her first day of work at an Amazon warehouse in Eastvale, California, she stepped into a wonder of automation, efficiency and speed. Inside the sprawling four-story building in Southern California’s Inland Empire, hundreds of squat orange robots whizzed across the floor, carrying tall yellow racks.

As a stower, her job was to stand in a spot on the floor, like hundreds of others in that million-square-foot warehouse, and fill an unending parade of merchandise racks. Another worker, known as a “water spider,” would bring her boxes upon boxes of goods – jars of protein powder, inflatable unicorn pool floats, laptops, makeup, Himalayan sea salt, vibrators and plastic toy cars. She’d grab each item out of a box, scan it, lift it onto the rack and scan its new location. She’d use a stepladder to put things on the top of the rack. For heavy items – she remembers the cases of pet food in particular – she’d have to squat down to hoist them in, then pop back up to grab the next item. As soon as she’d filled a rack, she’d press a button and one robot would zip it away while another robot would bring a new one to fill.

The moment an Amazon customer clicked “place your order,” a robot would haul one of those racks to a picker, who would grab the right item for the order and send it on a series of long conveyors to a packer, who would stuff it in one of those familiar, smiling cardboard boxes.

“The safety issues I’ve brought up have been dismissed and not dealt with. I want to see the safety culture in Amazon change and ensure the maintenance workers have the appropriate amount of training. There’s no training, there’s no safety, it’s ‘Get ’er done.’ ”

The clock was always ticking on Amazon’s promised delivery time. Dixon had to scan a new item every 11 seconds to hit her quota, she said, and Amazon always knew when she didn’t.

Dixon’s scan rate – more than 300 items an hour, thousands of individual products a day – was being tracked constantly, the data flowing to managers in real time, then crunched by a proprietary software system called ADAPT. She knew, like the thousands of other workers there, that if she didn’t hit her target speed, she would be written up and, if she didn’t improve, she eventually would be fired.

Amazon’s cutting-edge technology, unrelenting surveillance and constant disciplinary write-ups pushed the Eastvale workers so hard that in the last holiday season, they hit a coveted target: They got a million packages out the door in 24 hours. Amazon handed out T-shirts celebrating their induction into the “Million Unit Club.”

But Dixon, 54, wasn’t around for that. She started the job in April 2018, and within two months, or nearly 100,000 items, the lifting had destroyed her back. An Amazon-approved doctor said she had bulging discs and diagnosed her with a back sprain, joint inflammation and chronic pain, determining that her injuries were 100% due to her job. She could no longer work at Amazon. Today, she can barely climb stairs. Walking her dog, doing the dishes, getting out of her chair – everything is painful. According to her medical records, her condition is unlikely to improve.

So this holiday shopping season, as Amazon’s ferocious speed is on full display, Dixon is at a standstill. She told Reveal in mid-October that her workers’ compensation settlement was about to run out. She was struggling to land a new job and worried she’d lose her home.

“I’m still too young to feel like I’m 90 years old,” Dixon said, sitting in the living room of her Corona, California, home, which was decorated with inspirational sayings (“You never know how strong you are until being strong is the only choice you have”). “I don’t even know how I’m going to make it in a couple of months.” …

Is Amazon so hell-bent on meeting quotas that its practices are literally maiming some workers? On the biggest day of the year for online sales, Will Evans from Reveal’s Center for Investigative Reporting joins Stephanie Ruhle to dig into his report that Amazon’s intense rules for productivity are harming its employees.

Do You Want To Feel Really Good This Christmas? Boycott Amazon

The firm’s overworked warehouse staff have had to pee in old water bottles while their CEO is paid in a second what they earn in five weeks.

Jeff Bezos, says the TUC, earns as much in a second as one of his warehouse workers would earn in five weeks. It makes his performative philanthropy – such as his Bezos Day One charity, which helps families in low-income areas – slightly nauseating. If he hadn’t set Amazon up to maximise his power and overvalue his contribution, he wouldn’t have helped to create the disempowerment and exploitation he claims to want to overcome.

Serf-like conditions for Amazon warehouse staff, the atmosphere of hyper-surveillance in which every motion is monitored to check that it’s fast enough, are piled on top of the low wages to ram home to each employee how dispensable they are. But then, think of the free delivery.

In mainland Europe, Amazon has opened fulfilment centres in Poland where, reports say, it pays lower wages than in Germany. In four US states, Amazon is in the top of 20 employers whose workers rely on food stamps. Elsewhere, across the world, Amazon employees have peed in old water bottles because they can’t take toilet breaks. But obviously, it’s handy to get stuff a nanosecond after you realised you wanted it.

The best reason to boycott is the retail scorched-earth policy: Bezos intends to get us all to a place where we rely so heavily on Amazon that no other retailer, or retail model, exists. …