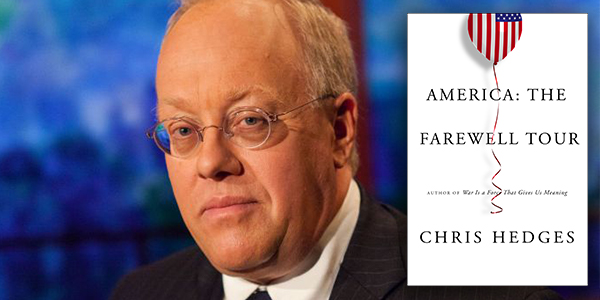 The United States is sick with income and other forms of social inequality. It suffers from cruelty, loneliness, greed, gangster capitalism, white supremacy, violence, sexism and a culture of ignorance and distraction. Our broken political system does not encourage critical thinking or nurture a capacity for responsible, engaged citizenship.President Donald Trump is the human embodiment of almost everything wrong with American society. He is both the symptom and the disease.

Trump and the Republican Party’s fascist movement and its news media and supporters are America’s problems given life as social and political chaos and destruction on a massive scale. Even reality and the truth have not been spared this assault.

In this conversation, philosopher, journalist and cultural critic Chris Hedges warns that impeaching Donald Trump will not save American democracy from these problems. …

Chris Hedges On The Rot Within The American System

“We’re in a situation far more dangerous than most people grasp.”

This interview originally aired on November 7, 2018. The journalist Chris Hedges has spent the last decade and a half trying to ring the alarm about the dangers of the U.S. political system and he writes about a corporate and financial coup d’etat that happened long ago in this country.