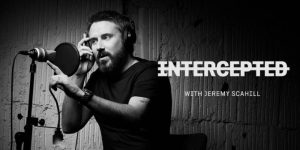 HOUSE DEMOCRATS ARE pushing forward with their investigation into President Donald Trump’s abuse of power, sparked by an internal whistleblower complaint. This week on Intercepted: Jeffrey Sterling was indicted in 2010 on charges under the Espionage Act for allegedly leaking sensitive national security information to then-New York Times reporter James Risen. Sterling discusses his time as a CIA case officer and how his internal complaint about Operation Merlin, a half-baked CIA scheme that had tried to disrupt Iran’s nuclear weapons development, led to his firing.

Sterling explains the discrimination suit he filed against the CIA and how there is no evidence that he was the source for Risen, who is now The Intercept’s senior national security correspondent. Sterling also shares what it was like to be charged under the Espionage Act and comments on the appalling hostility toward whistleblowers in the U.S. Sterling’s new book is “Unwanted Spy: The Persecution of an American Whistleblower.”