Human rights groups are condemning the Indian government for carrying out widespread torture, extrajudicial killings, arbitrary arrests and other crimes in Kashmir after the region’s special status was revoked in August. We speak to the acclaimed Indian author Arundhati Roy about the crackdown in Kashmir, rising authoritarianism in India and other issues.

Link To Transcrpt And 40-Minute Video 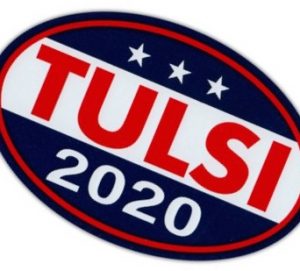 On September 16th of this year, Democratic presidential candidate Rep. Tulsi Gabbard (D-HA) went out of her way to welcome Indian Prime Minister Narendra Modi to Donald Trump’s ‘Howdy Modi’ event in Texas. In her welcome she apologized for not beng able to make it to the Trump rally and spoke glowingly of the close alliance between the US and India and wove a guazy tableaux of international peace and acceptance of all people; calling for a world where there was “No place for hate.”

Not once did she even acknowledge — much less condemn — the human rights tragedy that has been unfolding in Kashmir, in which the Indian government  — led by Modi — has been carrying out a vicious genocide against the native Muslim population. Be clear, Modi is a far right religious extremist — a true fascist — yet Gabbard, who many on the American left breathlessly declare a peace and love reformer — has said absolutely nothing about Modi’s crimes.

If you have the chance, see if you can get a diehard Gabbard supporter to even acknowledge their hero’s cowardly complicity in Modi’s crimes. Gabbard supporters need to confront the reality that when it comes to human rights tragedies like the one in Kashmir: Silence Is Consent and Gabbard, through her blissed out serene silence, is an active accomplice. The same can — and should — be said for her adoring fans who don’t challenge her on her disgraceful silence on Kashmir. 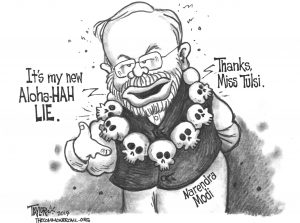