That said. Two stories leap out – Trump’s single most egregious authoritarian act and the polling picture one week after the House Intelligence Committee Impeachment hearings.

How Bad Will Trump Be If A Second Term

Or as the Seattle Times editorial board says, “Trump’s SEAL meddling weakens America”. In case you didn’t see the news, Trump pardoned a war criminal; Navy Special Operations Chief Edward Gallagher was found guilty by a jury of his peers for posing with the body of a dead teen. Gallagher was acquitted of a number of other serious charges including shooting innocent civilians and threatening to kill other SEALs if they reported him.

The Navy acted to remove Gallagher’s badge of SEAL honor, his trident pin; Trump reversed this. Navy Secretary Richard Spencer ended up leaving his position over his fight to protect the honor of the Navy and the SEALs.

A man of honor loses out in an argument while Trump chooses dishonor.

Dishonor – Trump wants to embrace Gallagher and two other convicted-and-pardoned war criminals as part of his reelection campaign. Trump “briefly discussed making a big deal at the convention”.

You could argue that Trump green-lighting and dismissing the Saudi Arabian murder of Washington Post journalist and US resident Jamal Khashoggi is more egregious. Or Trump’s reluctance to speak out on behalf of protestors in Hong Kong defying China’s crackdown on their democratic rights. Or China’s Xinjiang ‘detention’ camps holding Muslim Uighurs.

You could argue that Trump’s pulling out of the Paris Accord and presiding over a 3.8% increase in US carbon emissions while the United Nations is reporting that we are on track for a 5.8 degree temperature increase by the end of the century is a far more egregious against humanity.

I wouldn’t argue. But I register my concerns that Trump is politicizing our military and pandering for the loyalty of the worst of the worst – a Trump ‘dishonor’ code. I picture Trump going all-in on right wing nationalism, this from a guy who has already warned us of a civil war.

The first legitimate polling results post-Impeachment hearings are rolling out and there is the smallest of upticks over the last week for Impeachment. Generally the result is 50% of Americans are in support with slightly less against. But there has also been a small uptick in Trump’s job approval.

That’s on a national level and Quinnipiac adds that only 13% with an opinion are open to changing their minds.

Here in Wisconsin, one of a few battleground states that may well determine the outcome of the 2020 election, “a Marquette University Law School poll of registered Wisconsin voters… more expressed opposition than support for impeachment and removal, 53% to 40%, figures largely unchanged from October.” Wisconsin also polls higher than the national average for Trump job approval.

Apologies for such somber holiday snapshot. If there is a positive impeachment thread you might find solace in knowing that 50% support for impeachment is HUGE compared to this point in time for impeachment processes against Nixon and Clinton. You can also reflect on the fact that every court opinion has found in favor of Dems’ requests for testimony from subpoenaed witnesses and access to Trump’s tax information. Two legal challenges have now found their way to the Supreme Court by design and intent of Trump obstruction so there is possibly more Impeachment ammunition on the way.

The Impeachment focus shifts to the House Judiciary Committee next week. Democrats are moving to write articles of impeachment, which will certainly pass a House vote leading to a Senate trial.

An interesting note from a CNN poll shows women favoring impeachment 61-34 while men oppose 40-53 – offering yet more confirmation that women are smarter than men.

One final impeachment item before wrapping up, many are opining that Trump is throwing his personal clown-lawyer Rudy Giuliani under the bus. While I hope so, I am cautious. With regard to Trump-Ukraine Trump says, “no, I didn’t direct him…” while Rudy previously tweeted about his Trump-Ukraine role, “The investigation I conducted concerning 2016 Ukrainian collusion and corruption, was done solely as a defense attorney to defend my client…” To make it all more interesting, Rudy says he has ‘insurance’ that will keep him from going under the bus while indicted Giuliani/Trump associate Lev Parnas says he has ‘tapes’ of Giuliani and Trump. 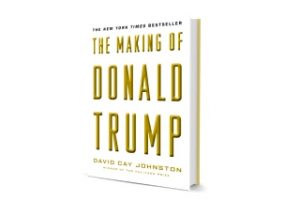 In case that is not somber enough, check out commentary from Pulitzer Prize winning journalist an Trump biographer David Cay Johnston and why I nominated Trump’s war criminal pardon as the worst news of the cycle.

Johnston reminds us that Trump EU ambassador Gordon Sondland, in a few words with his opening testimony, destroyed any Trump and Trumpster defense, testifying that Trump did it; he bribed and extorted a foreign government for personal election benefit and orchestrated the cover-up and the obstruction.

Trump is guilty as charged. And yet here we are with Trumpsters doing their ‘but her emails’ and ‘exoneration’ of Trump simply repetitiously mouthing invented conspiracies.

Johnston tells us what it will take if we are to rid ourselves of Trump as well as the price of failure:

“All we’re being asked to do as citizens is to pay attention and vote, contribute money and act. If the American people want to keep our democracy and our liberties and not go down the path that will inevitably lead to firing squads and a dictator, they must get and stay involved politically. If the American people want to maintain, they have got to be vigilant and they must endure.”

To quote actor Adam Driver from ‘The Dead Don’t Die’ with his version of what happens if we fail:

“This isn’t going to end well.”