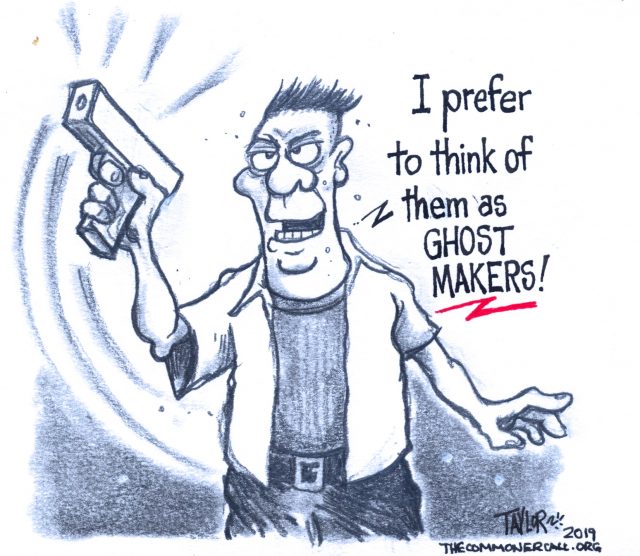 Cody Wilson, the self-described anarchist and figurehead of the 3D-printed gun movement, led investigators on an international manhunt last year before being arrested and charged with having sex with a minor. In August, he struck a deal with Travis County prosecutors, pleading guilty to a lesser charge of injury to a child, which is a felony.

He received seven years of probation and is now a registered sex offender, banned from being within 500 feet of playgrounds, schools, and any other “child safety zone.” He can no longer carry a handgun in public, and under federal law he is barred from buying and selling weapons at gun stores.

Despite that, Wilson says he is getting back to the business of 3D-printed guns. According to interviews with state and federal authorities, there’s nothing standing in his way.

After an international manhunt, Wilson pleaded guilty to a felony in Texas court. But the particulars of his deal left him in a legal gray area that allows him to own and work with firearms.

Wilson’s return coincides with the upcoming release of the Ghost Gunner 3, the latest iteration of a controversial gun-manufacturing machine produced by Defense Distributed, the company Wilson founded in 2012. The product is advertised to be bigger and faster, and its promoters boast that it can produce parts for AK-47 rifles. The machine is the latest product to capitalize on the growing trend of homemade weapons, which can be acquired without a background check.

Despite admitting guilt to a felony

Right after his arrest, Wilson announced he would step down as Defense Distributed’s CEO. Late last month, he told the Washington Free Beacon that his criminal history isn’t enough for anyone to stop him from returning to work. He said he is “definitely not a prohibited person” in Travis County, which has faced criticism for its lax approach to sexual assault prosecutions. For Wilson, this means he can own guns and even run a business that sells guns — despite admitting guilt to a felony.

Wilson confirmed that’s how he views his status, saying it’s consistent with what his probation officer told him. He declined to offer further comment.

Turns out, he may be right. Wilson’s plea deal — known as a deferred adjudication — is more or less a frozen indictment. If he meets the court’s terms in full, the felony charge is wiped. And while on probation, the state doesn’t view Wilson as a prohibited person.“The answer right now appears to be that [the deal] does count as a deferred and is not a hard conviction,” said Assistant District Attorney Joe Frederick. “And if that is the case, then he would be able to maintain possession or ownership of [a] firearm.”

In other words, though Wilson shouldn’t be able to pass a background check, he is free and clear to own a gun under state law, if he owned it before the plea deal. And because he can own a gun, Frederick said, he can also run a firearms business.

Under federal law, however, Wilson’s status is murkier, Frederick said.

“If he’s on probation and he somehow registers new firearms or somehow gets new guns or, you know, purchases a new gun as part of his business, that could violate his probation and that’d be a gray area,” he said.

Wilson clarified that he didn’t surrender any of his firearms as part of his plea deal, despite reporting to the contrary, and he said he wouldn’t necessarily have to purchase a firearm to run his company.

According to the Texas secretary of state, Wilson is currently listed as the director of Ghost Gunner Inc., an offshoot of Defense Distributed that manufactures the mills that print gun components from design files available online. Wilson confirmed that he directs Ghost Gunner. …

(Commoner Call carton by Mark L. Taylor, 2019. Open source and free for non-derivative use with link to www.thecommonercall.org )

The weapon was a “kit gun” with no serial numbers, and another kit gun was found at the family’s home, Sheriff Alex Villanueva told television station KABC.

It was unclear who assembled the gun. Weapons assembled at home, allowing owners to avoid registering them, are commonly called ghost guns.

Villanueva said the suspect’s father, who died in 2017, at one point had six firearms registered to him, but those guns had been lawfully removed from the home and were legally destroyed. He was then considered a “prohibited possessor” who could not legally own a gun, but Villanueva did not say why. …

Read The Rest And 1+-Minute Video