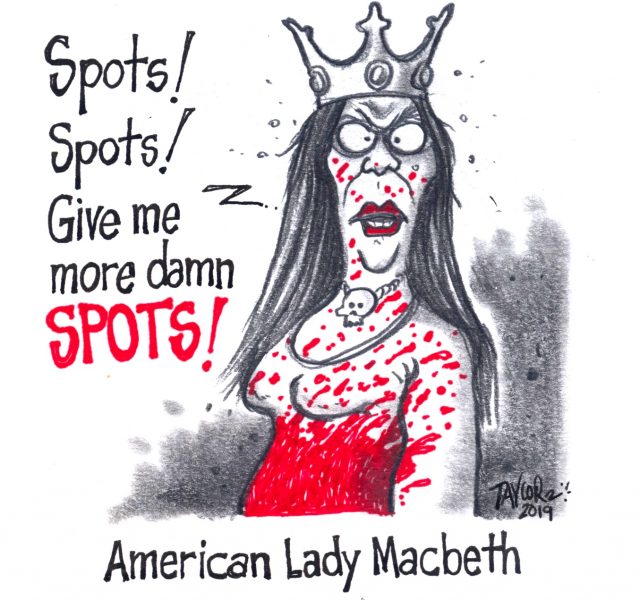 Jimmy Dore (10/23) and his panel of comedians take on a recent Fortune magazine feature celebrating the rise of women executives to lead American war profiteering corporations, beginning with Lockheed Martin’s CEO Maryliyn Hewson, who began her work life as an ambitious teen dishing up ice cream at her hometown Dairy Queen and now markets weapons of indiscriminate mass destruction used to maul, main and murder families around the world for big profits and expanding market share.

Hewson is a uniquely adept and skilled Chairman, President and CEO as she has recently joined the board of Johnson & Johnson earlier this year as a side gig. Smart strategy as she can now profit from both bombs and bandages. What a winning strategy.

Phoebe Novakovic is the Chairman and CEO at General Dynamics who helped the corporation cash in on a loosening of American weapons international trafficking to increase profits 17% in 2017. Solidly in the black while drenching poor brown people in the Middle East in red! She also led General Dynamics in profiting by surveillance technology on our southern border and helping to facilitate the separation of children from their parents and keeping them in cages.

Meanwhile, over at Northup Grumman, President and CEO Kathy Warden has led that corporate gun-running operation to almost $26 billion in contracts in the first two quarters of 2019, boosting the operation’s stock price about 50%, proving there is always money to be made in wanton industrialized killing of poor brown people.

Soaring profits, bounding stock prices, cushy new contracts and all of it with female top executives, proving that when it comes to equal opportunity sociopathic murder, mayhem and profit making Wall Street investors couldn’t be happier … or more politically correct!

(Commoner Call cartoon by Mark L.Taylor, 2019. Open source and free for non-derivative use with link to www.thecommonercall.org )

It’s no secret that Donald Trump is one of the most aggressive arms salesmen in history. How do we know? Because he tells us so at every conceivable opportunity. It started with his much exaggerated “$110 billion arms deal” with Saudi Arabia, announced on his first foreign trip as president. It continued with his White House photo op with Crown Prince Mohammed bin Salman in which he brandished a map with a state-by-state rundown of American jobs supposedly tied to arms sales to the kingdom. And it’s never ended. In these years in office, in fact, the president has been a staunch advocate for his good friends at Boeing, Lockheed Martin, Raytheon, and General Dynamics — the main corporate beneficiaries of the U.S.-Saudi arms trade (unlike the thousands of American soldiers the president recently sent into that country’s desert landscapes to defend its oil facilities).

All the American arms sales to the Middle East have had a severe and lasting set of consequences in the region in, as a start, the brutal Saudi/United Arab Emirates war in Yemen, which has killed thousands of civilians via air strikes using U.S. weaponry and pushed millions of Yemenis to the brink of famine. And don’t forget the recent Turkish invasion of Syria in which both the Turkish forces and the Kurdish-led militias they attacked relied heavily on U.S.-supplied weaponry.

“The vast majority of Americans oppose runaway arms trading on the sensible grounds that it makes the world less safe.”

Donald Trump has made it abundantly clear that he cares far more about making deals for that weaponry than who uses any of it against whom. It’s important to note, however, that, historically speaking, he’s been anything but unique in his obsession with promoting such weapons exports (though he is uniquely loud about doing so).

Despite its supposedly strained relationship with the Saudi regime, the Obama administration, for example, still managed to offer the royals of that kingdom a record $136 billion in U.S. weapons between 2009 and 2017. Not all of those offers resulted in final sales, but striking numbers did. Items sold included Boeing F-15 combat aircraft and Apache attack helicopters, General Dynamics M-1 tanks, Raytheon precision-guided bombs, and Lockheed Martin bombs, combat ships, and missile defense systems. Many of those weapons have since been put to use in the war in Yemen.

Late in the Yemen game

To its credit, the Obama administration did at least have an internal debate on the wisdom of continuing such a trade. In December 2016, late in his second term, the president finally did suspend the sale of precision-guided bombs to the Royal Saudi Air Force due to a mounting toll of Yemeni civilian deaths in U.S.-supplied Saudi air strikes. This was, however, truly late in the game, given that the Saudi regime first intervened in Yemen in March 2015 and the slaughter of civilians began soon after that.

By then, of course, Washington’s dominance of the Mideast arms trade was taken for granted, despite an occasional large British or French deal like the scandal-plagued Al Yamamah sale of fighter planes and other equipment to the Saudis, the largest arms deal in the history of the United Kingdom. According to the Stockholm International Peace Research Institute, from 2014 to 2018 the United States accounted for more than 54% of known arms deliveries to the Middle East. Russia lagged far behind with a 9.5% share of the trade, followed by France (8.6%), England (7.2%), and Germany (4.6%). China, often cited as a possible substitute supplier, should the U.S. ever decide to stop arming repressive regimes like Saudi Arabia, came in at less than 1%.

The U.S. government’s stated rationales for pouring arms into that ever-more-embattled region include …