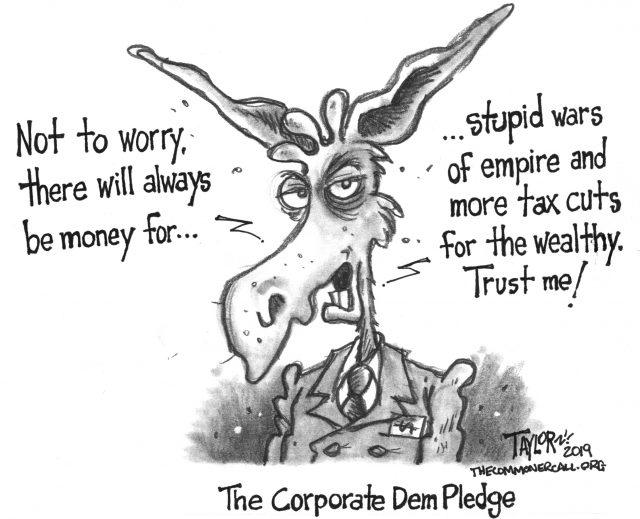 A handful of Senate Democrats joined forces with Republicans last week to advance sweeping budget legislation that would establish an “automatic deficit-reduction process” that could trigger trillions of dollars in cuts to Medicare, Medicaid, food stamps, and other social programs—and potentially hobble the agenda of the next president.

Sen. Bernie Sanders (I-Vt.), the ranking member of the Senate Budget Committee and a 2020 Democratic presidential candidate, issued a statement last week opposing the legislation and warning it “could be used by Republicans to unilaterally cut programs like Medicare, Medicaid, and nutrition assistance—all supposedly to reduce the deficit.”

“This new proposed process comes less than two years after Republicans on this Committee showed no hesitation in adding $2 trillion to the deficit in order to pass the Trump tax cuts for the wealthiest families and the most profitable corporations in America,” said Sanders.

“If a Democrat wants to extend free public college to all Americans, or move toward a universal health care system, or amass resources to fight the climate crisis, they’re going to run into the deficit scolds.”

As The American Prospect‘s David Dayen noted Thursday, passage of S.2765 would severely hamstring Sanders’ ability to implement his agenda should he win the White House in 2020.

“If a Democrat wants to extend free public college to all Americans, or move toward a universal healthcare system, or amass resources to fight the climate crisis,” Dayen wrote, “they’re going to run into the deficit scolds, the ‘No, We Can’t’ brigade. Republicans like Enzi want to build that ‘No, We Can’t’ presumption into the budget process itself. It makes no sense for Democrats to help them.”

“For the most part, cuts would have to come out of mandatory programs, like health spending and nutrition assistance for the poor. (Social Security is protected from reconciliation and could not be cut.)…

“[T]he past three budget resolutions passed by Congress would have, under this bill, forced automatic reconciliation deficit cuts with a staggering total of $9.5 trillion.”

In an analysis of S.2765 last week, Richard Kogan and Joel Friedman of the Center on Budget and Policy Priorities wrote that the bill amounts to “automatic austerity” that could “drive harmful budget cuts” and severely hamper the nation’s ability to respond to an economic downturn.

“The question of what’s sound budget policy should not be driven by a presumption that austerity is always the right answer,” Kogan and Friedman wrote.

The vote to advance S.2765 out of the Senate Budget Committee came after House Speaker Nancy Pelosi (D-Calif.) said Democrats must commit to so-called “pay-go” rules, which require all new spending to be offset with budget cuts or tax increases.

Progressives have warned that adherence to conservative pay-go rules would completely undermine any possibility of Medicare for All, a Green New Deal, and other ambitious policy goals.

“Any left-wing president will have to deal with the Pelosi problem: the existence of powerful Democrats who are too wedded to big money to accept an ambitious program,” The Nation‘s Jeet Heer wrote last week. “Defeating the Republicans will be the easy part. The real challenge will be overriding Pelosi’s veto.”

Most Democrats expect the governing agenda of the next Democratic president to be set by, well, whomever that next president might be. Ben Cardin, Democratic senator from Maryland, has other ideas.

“I think we’ll take up our own proposals,” Cardin told The Hill on Tuesday. Asked if he would vote for a “Medicare for All” package — a policy supported by the two most popular 2020 contenders in the Iowa caucuses ― the 76-year-old Cardin suggested the bill wouldn’t even be granted a vote.

“I don’t know that we’ll have a chance to do that,” he said.

Over the past two years, progressives frustrated with the timidity of the Democratic Party’s opposition to President Donald Trump have trained their fire on House Speaker Nancy Pelosi (D-Calif.). Pelosi’s caucus had to drag her kicking and screaming into opening an impeachment inquiry into the president, and she repeatedly invokes political constraints as a reason to eschew a progressive agenda. “What works in San Francisco does not necessarily work in Michigan,” she recently told Bloomberg.

As a practical matter, Pelosi’s political instincts have been unreliable all year. Impeachment is popular, and both Sens. Bernie Sanders (I-Vt.) and Elizabeth Warren (D-Mass.) are polling just fine against Trump in Michigan, a state Hillary Clinton lost in 2016. But the deeper problem is not her judgment, but the outdated attitude she and other Washington Democrats like Cardin have maintained even as Democratic voters have moved on.

The politics of the 2020 primary will alter public opinion, but a fall 2018 survey by the liberal think tank Data for Progress found a broad base of support for progressive policies among all voters — not just Democrats — with 68 percent supporting a wealth tax on fortunes of $100 million or more, 64 percent supporting a green energy infrastructure project and 57 percent supporting fully legalized marijuana. In July 2019, a Data for Progress/YouGov poll showed roughly 80 percent of Democrats support expanding Medicare into “the main health insurance provider for all Americans.” the months since, Medicare for All polling has depended a lot on what Democrats on television have been saying about it.

There is a strange balancing act taking place in which elected officials recognize that they must describe themselves as “progressive” in order to meet the approval of rank-and-file Democratic voters, while at the same time insisting that ambitious reforms are dangerous and immoral. …

‘The Afghanistan Papers’: Bipartisan War On Truth Revealed In The Washington Post Series