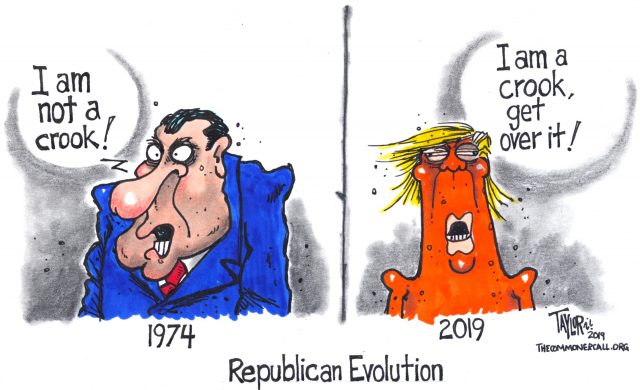 “House Intelligence Committee Chairman Adam B. Schiff (D-Calif.) decided to read the tweet aloud and give Yovanovitch a chance to respond. She said she found the effect of Trump’s words “very intimidating.””

“The most profound threat to democracy today is not from Russia … The most grave threat to the life and health of our democracy comes from within, from a president without ethical compass. Without an understanding of or devotion to our Constitution.”

“As glorious as today was for people who love the United States of America & the rule of law and detest Trump & all that he stands for…as cathartic as it was to watch the strutting ratfucker Roger Stone’s hour on the stage end w/ a pathetic whimper…I’m fucking PISSED.”

“On “Meet the Press,” Sen. Ron Johnson (R-Wis.) says the whistleblower’s sources “exposed things that didn’t need to be exposed.” “This would have been far better off if we would have just taken care of this behind the scenes,” Johnson says.”

The last few days will stand as a meaningful part of the history however the Trump Impeachment process concludes and is remembered. The next few days will be the same. The opening quotes above paint an arc of the story.

There were two notable standing ovations given on Friday. Former US Ambassador to Ukraine Marie Yovanovitch testified before the House Intelligence Committee and received a spontaneous and well-deserved standing ovation from the public in attendance.

Following the Washington Post link from the first quote above, author Aaron Blake summarizes, “Yovanovitch painted a picture of a State Department and a U.S. foreign policy establishment held hostage by the whims of the president” while also noting the damning and shameful lack of support Yovanovitch deserved and did not receive from Sec. of State Mike Pompeo. Trump and Trumpsters will throw anyone under the bus to enable Trump’s personal ambitions. Sadly this is even true for US national interests.

But there was a second standing ovation. I’ve used House Intelligence Chair Adam Schiff’s quote to underscore the appearance of Trump personal attorney and attorney general William Barr’s Friday evening speech to a private event for the Federalist Society. The Federalist Society is an extreme conservative group that is the fount of all right-wing federal court nominees and Supreme Court Justices. Barr is a proponent of the ‘unitary executive theory’ and offers this projection against Trump’s political opposition:

“”The fact of the matter is that, in waging a scorched earth, no-holds-barred war of “resistance” against this administration, it is the left that is engaged in the systematic shredding of norms and the undermining of the rule of law,” Barr said.”

Be concerned; be very, very concerned.

In response I have quoted author Greg Olear:

“Ah, the Nazi tactic of accusing your enemy of what you yourself are guilty of. Here, White Power Bill uses it to defend the cockamamie notion that Trump should have Fuhrer-like powers. Good news for Barr: in prison, they have a gang he can join that’s really into this stuff.”

Overstatement? A loaded sentiment, but not overstatement. Barr did all he could to undermine the Mueller Report and will soon be issuing his own reboot report that is meant to undermine all findings of Russian election interference to benefit Trump in 2016 with a Ukraine version meant to justify Trump’s extortion of Ukraine and show a 2016 influence to favor Clinton.

The second credit to Olear is the third opening quote. Olear reports — no, justifiably rants — about the conviction of Trump’s long-time advisor Roger Stone on all seven federal charges for lying to Congress, witness tampering and obstruction. It is a fun read.

Before leaping ahead, once again I’m struck by how yet another Trumpster is convicted for exactly what Trump does daily – lie, obstruct and — as with Yovanovitch — witness intimidation. Fitting that the conviction is announced while Yovanovitch is testifying. 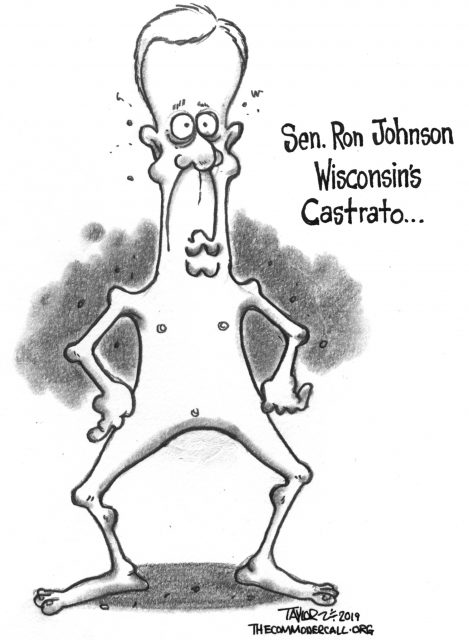 If most of us weren’t living in Wisconsin this last story wouldn’t rise to the level of noteworthy though it is as good, or damning, of any example of how low Trumpsters will stoop to carry Trump’s water.

To Trump-Ukraine Sen. Ron Johnson (R-WI) laments, “…we would have just taken care of this behind the scenes”. Reminding us that if NOT for the Whistleblower nothing would have happened – Trump would have successfully extorted Ukraine president Zelensky into announcing sham investigations to get the US military aid being withheld and benefiting Trump’s personal ambitions.

Says who? Says CNN GPS host Fareed Zakaria who explains that Zelensky was hours away from going public with exactly what Trump demanded before the Whistleblower story broke and changed history. Please watch the 3:43-minute explanation.

That same night Barr’s vision of a presidency with limitless power free of Constitutional checks and balances is met with a standing ovation. While Trumpsters await Barr’s rewrite of history to falsely claim, or at least attempt, exoneration of Trump – again.

Which version of the United States will win out? – the opening quote from Adam Schiff or the Trump-Barr view of unlimited power. We do know which version Russia prefers. In fact this next week will bring focus to how Russia knew that

Trump was undermining Ukraine, and benefitting Russia. (Go here for a view of how the GOP parrots Russian propaganda.)

To underscore the House Speaker Pelosi quote, Trump and Trumpsters are counting on his sheer will of attacking and obstructing for surviving Impeachment. It worked once.

But there has to be a little room for humor – here’s Saturday Night Live’s  ‘Days of Our Impeachment’. Also, scroll down for “you take your nasty ass to Bing”, you’ll be glad you did.

And whatever did happen to the now missing-in-actin Trump clown-lawyer Rudy Giuliani?