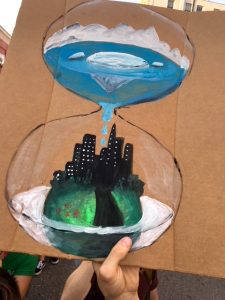 “We declare, clearly and unequivocally that planet Earth is facing a climate emergency.”

More than 11,000 scientists from 153 countries have declared a climate emergency, warning in a new report that “untold human suffering” is “unavoidable” without drastic action.

The climate crisis reaches an “emergency” level, according to the study, when “business as usual” — the current action being taken (or not) by society, corporations and governments — is not enough to match the scale of what’s needed to address the situation.

In order to avoid a “hothouse Earth” where runaway temperature increases beget further warming, the scientists call for immediate action to overhaul the way we live ― from agriculture to education.

“Rather than piecemeal solutions, we need transformative change in the way society functions and interacts with nature.”

“Rather than piecemeal solutions, we need transformative change in the way society functions and interacts with nature,” William Ripple, a professor at Oregon State University’s College of Forestry, told HuffPost in an email. Ripple, one of the study’s authors, called for a holistic solution that also addresses social justice issues and honors “the diversity of humans around the world.”

The scientists’ warning comes one day after the third anniversary of the Paris climate agreement officially going into effect on November 4, 2016, and one day after President Donald Trump officially began the process to withdraw the U.S. from the accord.

It opens by stating, “Scientists have a moral obligation to clearly warn humanity of any catastrophic threat and to ‘tell it like it is.’”

“We declare,” it continues, “… clearly and unequivocally that planet Earth is facing a climate emergency.”

Read The Rest And 3-Minute Video