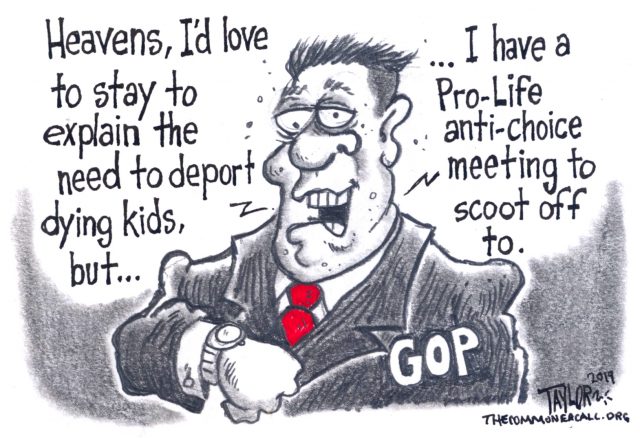 Rachel Maddow reports on acting director of the U.S. Citizenship and Immigration Services, Ken Cuccinelli, being open in his answers to Congress about the cruelty of the policy he implemented, threatening extremely ill immigrant kids and their families with deportation.

Amidst Russia and Ukraine and corruption and the rest, it’s still the mindless, careless cruelty against the vulnerable – yes, kids still languish in cages – that sticks in our gut. This weekend, an Abrazos no Muros/Hugs Not Walls event at the border offered a grievous reminder as thousands of family members, often separated for years, waited in long lines for a strictly supervised, precisely timed, invariably weeping three-minute hug in a concrete culvert in the Rio Grande – a hug “rooted in love, but also protest.” An estimated 3,000 people, from toddlers to grandparents in wheelchairs, gathered Saturday along a small strip of damp land near the fence between El Paso, Texas and Ciudad Juárez, Mexico. Many of the relatives live just a few miles apart, but politics – most often the failure to get asylum in the U.S. – keeps them divided; that day, one woman saw her father for the first time in 31 years.

These dark days, Garcia adds, more and more families are “in crisis”; he cites Trump’s “appalling and disgusting” proposal to shoot in the legs those seeking to cross the border as “mind-blowing” proof of “how far from normal we’ve veered.” The recent event also pointedly exposed the lethal effects: At its start, 22 women from El Paso carried 22 white crosses representing the El Paso Walmart massacre victims, and seven women from Juarez carried seven crosses representing the children killed in US custody or trying to get here, with all holding a moment of silence. Then officials – red shirts from Juarez, black shirts from El Paso – opened a gate in the fence.

Methodically, about 40 family members at a time on both sides – white shirts from Juarez, blue shirts from El Paso – walked down their respective ramps, standing within feet of each other in the middle of the culvert. A BNHR spokesman shouted through a loudspeaker: “Familias abrazen,” or families hug. And they did, hugging, weeping, taking rushed selfies, meeting children or grandchildren for the first time, laughing, wailing, weeping again. Three minutes. At another command on the loudspeaker, they tearfully separated, dutifully climbing back up the ramps as new families lined up for their precious three minutes. US Border Patrol impassively watched the joy and grief. Said one, “For us it’s business as usual – maintain border security.” Garcia saw something else: “This is about human beings.”