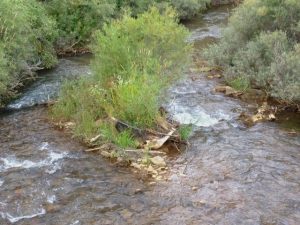 There’s new evidence that a widely used family of pesticides called neonicotinoids, already controversial because they can be harmful to pollinators, could be risky for insects and fish that live in water, too.

The evidence comes from Lake Shinji, which lies near Japan’s coast, next to the Sea of Japan.

Masumi Yamamuro, a scientist with the Geological Survey of Japan, says the lake is famous for its views of the setting sun. “It’s amazingly beautiful,” she says.

Lake Shinji was also the site of thriving fisheries. People harvested clams, and eels, and small fish called smelts. But, Yamamuro says, about a decade ago, people noticed that fish populations had declined drastically. “I was asked to investigate the cause of this decrease,” she says.

It was a puzzle. Yamamuro says the decline in fish populations did not seem to coincide with anything that people were keeping track of, like the lake’s salinity, or levels of pollution.

But she noticed something curious. One kind of fish in the lake was doing fine. This one had a more diverse diet; it could eat algae, as well as tiny insects in the water. The eels and the smelts that were dying off relied on insects and crustaceans for food. And that food source was vanishing.

“So we concluded [that] something killed the food of the eels and the smelt,” Yamamuro says.

She and her colleagues now believe that they’ve identified the culprit: pesticides called neonicotinoids. …

According to a statement by the Brazilian Indigenous Peoples Association, Paulo Paulino Guajajara was shot and killed inside the Araribóia indigenous territory in Maranhão state. Another tribesman, Laércio Guajajara, was also shot and hospitalised and a logger has been reported missing. No body has yet been recovered.

Sérgio Moro, the justice minister of far-right president Jair Bolsonaro’s government, confirmed that Brazil’s federal police were investigating the killing. “We will spare no effort to bring those responsible for this serious crime to justice,” he tweeted.

The tribesmen are members of an indigenous forest guard called Guardians of the Forest, which formed in 2012 to ward off logging gangs pillaging their rare, hardwood-rich reserve.

Their work involves armed patrols and destroying logging encampments and has earned them dangerous enemies. Several Guardians in Maranhão have been killed in recent years, including three from Araribóia.

According to Gilderlan Rodrigues, Maranhão regional coordinator of Brazil’s indigenous missionary council, the murdered tribesman had been threatened several times. “Their work bothers those that want to loot their territory,” he said, adding that the killers were from a nearby rural settlement and had entered the reserve without permission. “These criminal actions must be combated so that more lives are not lost.” …