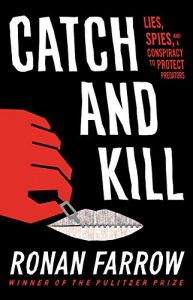 Ronan Farrow’s explosive reporting on movie mogul Harvey Weinstein’s alleged sexual misconduct helped launch the MeToo movement in 2017 and won him a Pulitzer Prize in 2018. In his latest book, Farrow accuses NBC, his former employer, of trying to thwart his investigation of Weinstein. Farrow joins Judy Woodruff to discuss “Catch and Kill: Lies, Spies, and a Conspiracy to Protect Predators.”

Ronan Farrow And The Revelations Of Reporting On Predators

Harvey Weinstein, Matt Lauer and reporting on powerful men with a lot at stake. A conversation with Ronan Farrow.

Ronan Farrow, investigative journalist and contributing writer to The New Yorker. Author of “Catch and Kill: Lies, Spies, and a Conspiracy to Protect Predators.”(@RonanFarrow)

What do you mean it’s not airing tomorrow?” My words drifted over the emptying newsroom on the fourth floor of 30 Rockefeller Plaza, inside the Comcast building, which had once been the GE building, which had once been the RCA building. On the other end of the line, Rich McHugh, my producer at NBC News, was talking over what sounded like the bombing of Dresden but was in fact the natural soundscape of a household with two sets of young twins. “They just called, they’re — no, Izzy, you have to share — Jackie, please don’t bite her — Daddy’s on the phone —”

“But it’s the strongest story in the series,” I said. “Maybe not the best TV, but the best underlying story —”

“They say we’ve gotta move it. It’s fakakt,” he said, missing the last syllable. (McHugh had this habit of trying out Yiddish words. It never went well.)

Airing a series of back-to-back investigative spots like the one McHugh and I were about to launch required choreography. Each of the stories was long, consuming days in the network’s edit rooms. Rescheduling one was a big deal. “Move it to when?” I asked.

On the other end of the line, there was a muffled crash and several successive shrieks of laughter. “I gotta call you back,” he said.

McHugh was a TV veteran who had worked at Fox and MSNBC and, for the better part of a decade, Good Morning America. He was barrel-chested, with ginger hair and a ruddy complexion, and wore a lot of gingham work shirts. He had a plainspoken, laconic quality that cut through the passive-aggressive patter of corporate bureaucracy. “He looks like a farmer,” the investigative unit boss who had first put us together the previous year had said. “For that matter, he talks like a farmer. You two make no sense together.”

“Why the assignment, then?” I’d asked.

“You’ll be good for one another,” he’d replied, with a shrug.

McHugh had seemed skeptical. I didn’t love talking about my family background, but most people were familiar with it: my mother, Mia Farrow, was an actress; my father, Woody Allen, a director. My childhood had been plastered across the tabloids after he was accused of sexual assault by my seven-year-old sister, Dylan, and began a sexual relationship with another one of my sisters, Soon-Yi, eventually marrying her. There had been a few headlines again when I started college at an unusually young age and when I headed off to Afghanistan and Pakistan as a junior State Department official. In 2013, I’d started a four-year deal with NBCUniversal, anchoring a midday show on its cable news channel, MSNBC, for the first year of it. I’d dreamed of making the show serious and fact-driven, and by the end, was proud of how I’d used the inauspicious time slot for taped investigative stories. The show got some bad reviews at the start, good reviews at the end, and few viewers throughout. Its cancellation was little-noticed; for years after, chipper acquaintances would bound up at parties and tell me that they loved the show and still watched it every day. “That’s so nice of you to say,” I’d tell them.

I’d moved over to the network to work as an investigative correspondent. As far as Rich McHugh was concerned, I was a young lightweight with a famous name, looking for something to do because my contract lasted longer than my TV show. This is where I should say the skepticism was mutual, but I just want everyone to like me.

Working with a producer on the road meant a lot of time together on flights and in rental cars. On our first few shoots together, the silence would yawn between us as highway guardrails flashed by, or I’d fill it with too much talk about myself, eliciting the occasional grunt.

But the pairing was starting to yield strong stories for my Today show investigative series and for Nightly News, as well as a reluctant mutual respect. …