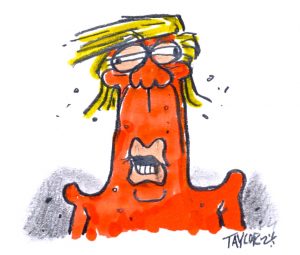 President Trump to be Impeached by the US House of Representatives

The US House of Representatives is scheduled to hold a vote on Thursday (today) on the rules and procedures for the Impeachment Inquiry of Donald Trump.

The rules will govern public hearings over whether Trump should be charged, Articles of Impeachment, and whether he will face trial in the Senate.

The procedural vote is likely to closely follow party lines and with a Dem majority, rules will be in place and public hearings will commence. At some point the House will vote on Articles of Impeachment and a referral of the case to the Senate for trial. The House will almost certainly vote to make this referral to the Senate. The Senate would then conduct a trial and decide the outcome and consequences for Trump, if any.

Corroborating the Corroborations of Trump’s Quid Pro Quo to Ukraine

Quid pro quo sounds so benign – how many times has Trump referred to his “perfect call” with Ukraine president Volodymyr Zelensky and offered, “no quid pro quo”.

The opposite is true. Trump demanded a quid pro quo with Zelensky, his very (im)perfect phone call as borne out by his released rough transcript had him saying, “I would like you to do us a favor though.” Trump put pressure on Zelensky to come forward with ‘dirt’ on a political opponent before he would release the $400 million in military aid — which had already been appropriated by congress — to resist a Russian incursion in eastern Ukraine that had already cost Ukraine 13,000 lives. Nor would Trump agree to a White House meeting before Zelensky relented. And Trump put his personal lawyer, Rudy Giuliani, in charge of the discussions with Zelensky, an unofficial, informal diplomatic channel, while crippling the formal US diplomatic channel with Ukraine.

The evidence against Trump is far broader than a single phone call. Trump had already told his Chief of Staff Mick Mulvaney to hold back the military aid – and Mulvaney had done this, per Trump’s suggestion, while disguising his actions.

How do we know any of this?

Because Trump admitted pressuring Ukraine publicly. Mulvaney admitted pressuring Ukraine publicly, confirmed it was to have a foreign government assist in a US election by producing dirt on an opponent and told us to, “get over it”. Trump’s imperfect phone call confirms the pressure. Documents regarding testimony of witnesses before Congress confirm the political pressure.

Trump’s actions are illegal and immoral and we’ve all been told he did it even while he persists in telling us the problem is with all these people testifying against him.

Trump’s personal defense just got shredded. As so often happens, if not for other news this would have been the lead headline.

Lieutenant Colonel Alexander Vindman has served in the Army for two decades and received a Purple Heart after being wounded in Iraq. He has clarified, he is not the whistleblower, and came forward because what he witnessed firsthand was wrong. For his steadfast defense of democracy some on the Right push to undermine him as a double agent, Trump tries a tired refrain referring to him as a Never-Trumper.

But make no mistake – Vindman’s testimony is damning and confirming of what many witnesses have offered to date: That Trump pressured a foreign government to produce dirt on a political opponent.

Vindman even said the rough transcript released by Trump had been edited –- as bad as the transcript is, the actual conversation was worse. One specific, Trump said, “Burisma”, which is the company linked to Joe Biden’s son Hunter Biden. This was never about Trump being a new convert to corruption fighting, he wanted dirt on a political opponent. Trump also told Zelensky he had tapes of Biden; this does not appear in Trump’s rough transcript, again because Trump needed to whitewash his hunt for ‘dirt’ specifically targeting Biden.

Harrumph you say? One person can clear this up – Trump can release the recordings of the discussions. Trump could also cooperate and stop resisting subpoenas for testimony and documents. But we know he won’t do that.

Who else has corroborated Trump’s guilt?

In addition to Lieutenant Colonel Vindman there are others confirming Trump’s guilt and some that are getting caught in their lies. As Vindman points out, Ambassador Gordon Sondland was present during a meeting where Sondland told former Trump national security advisor John Bolton about the need for Ukraine to deliver “specific investigations”. Bolton has shared this publicly but this also appears to confirm a lie Sondland told Congress during his own testimony.

There are other corroborations but let’s look at an unintentional one.

Sen. Ron Johnson (R-WI) is in hot Trump-Ukraine water again, “Johnson told the Milwaukee Journal Sentinel that Trump himself conveyed the quid pro quo to him in a phone call, and that it involved the conspiracy theory about the Russia investigation. Johnson said he was trying to get Trump to release the military aid when Trump made the admission”. Johnson has tried to walk back his own admissions – you can hear him relate this here from the 4:45 mark.

You can also watch MSNBC host Ari Melber do a great job of laying out the Trump-Ukraine case against Trump based on what we now know: “’Shredded’: Army Officer On Trump-Ukraine Bribery Call Spills On Trump”.

What to expect from Republicans

The House will start public hearings and we’ll hear all we’ve learned to date about Trump’s guilt over pressure on Ukraine to find dirt on a political opponent and rewrite the 2016 election attack as not about Trump-Russia, but about Ukraine and Democrats. There are many corroborating voices to date and a few that are already caught up in their lies or their unintended admissions about Trump’s guilt, like our own Sen. Ron Johnson.

The House will almost certainly impeach and then it is up to the Senate. Understand, Republicans argue, deflect, resist but they know where this is heading. I read about Republican get-out-the-vote canvassing training in Kenosha, WI by motivating voters by citing impeachment. As an example, “How much of your day to day life is any different because of impeachment?”

In other words, the question to motivate a Republican voter is, does impeachment make your life better or worse? Know that these same people will pressure Sen. Johnson to vote to support Trump in the Senate. Facts be damned, stand with the Republican tribe.

One final observation. Trump is crowing about ‘his’ raid that killed ISIS leader Baghdadi. Understand, Trump’s announcement about pulling back US troops in Syria almost undid that raid that had been in planning for months. AIt was a raid based on Kurdish intelligence from a mole inside the Baghdadi compound. Though Trump thanks Russia first and the Kurds hardly at all.

And of course, in beating a hasty rag-tag military retreat from Syria he betrayed our Kurdish allies who made bagging Baghdadi possible. Disgraceful.

To put this insanity in perspective MSNBC host Lawrence O’Donnell gives a withering commentary peeling away Trump corruption, autocracy and complete ignorance and inattention to detail. It is a damning review of the ‘clear and present danger’ Trump presents to us all: Lawrence On ‘The Clear And Present Danger Of Mark Esperanto’.

Our voices need to be heard at least as loudly as Republicans.