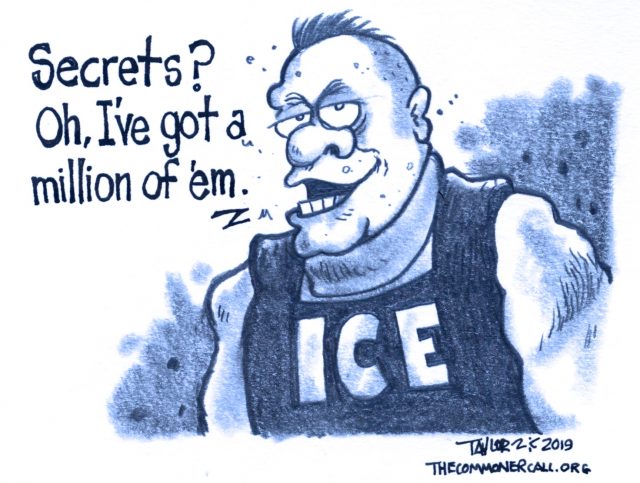 “The level of aggressiveness with which they are pursuing secrecy should alarm us.”

Angelina Godoy started digging for answers more than a year ago.

The human rights researcher had heard that ICE agents occasionally swept up migrant kids and locked them up in juvenile detention facilities, but she had no idea why.

One of the places ICE supposedly housed these young people, Godoy learned, was a few hours from her home in Seattle. She searched online for information about the detentions, but couldn’t find anything that explained what was going on. She then filed a series of public records requests with officials at the juvenile detention center closest to her, hoping they could shed light on what ICE was doing and why these minors were being held in places run more like jails than the shelters most migrant children end up in when they are detained. She had specifically requested detailed detainee files, with names and personal information redacted, and the facility was ready to share them with her.

But what happened next stunned her: ICE blocked the facility from sharing the records and the federal government even went to court to keep the information secret.

Immigrant youth — regardless of their residency status — are supposed to receive a number of legal protections when detained. Yet more than a dozen immigration attorneys describe the agency’s detention of minors as a black hole.

Unbeknownst to Godoy, she had stumbled upon an obscure pocket of the immigration system, where little is known, and little is divulged.

For more than a decade, ICE has been taking a small number of immigrant teens it deems to be dangerous far from their families and detaining them for months at a time.

For immigration attorneys and human rights experts such as Godoy, the practice is alarming.

Public attention has primarily focused on the treatment of children who recently crossed the border illegally on their own or with their parents. These kids are usually held in Border Patrol camps, family shelters overseen by ICE or on their own in facilities run by the Office of Refugee Resettlement (ORR) for so-called “unaccompanied” children, after arriving without any parents or being separated from them.

But teenagers who are already living inside the country with a parent can be classified as accompanied. This means if they are apprehended by ICE, they can be put in secure facilities where ICE has contracted to hold them, mixed among other US youth. …

A private prison guard physically assaulted a five-year-old boy at an immigration detention center in Texas, according to a complaint filed with the Department of Homeland Security (DHS).

Advocates for the boy and his mother expect the family to be deported on Friday and asked the US government to halt the deportation to investigate the alleged assault. The advocates also said the family, who are anonymous for safety reasons, face imminent harm or death in their home country of Honduras.

“The government has a long history demonstrating it’s not capable of holding people in their custody responsibly and certainly not children who require special protections and safeguards.”

The alleged assault occurred in late September, when the boy was playing with a guard employed by the private prison company CoreCivic who had played with the boy before.

The five-year-old tried to give the guard a high-five, but accidentally hit him instead, angering the guard, according to a complaint seen by the Guardian. The guard then allegedly grabbed the boy’s wrist “very hard” and would not let go. …