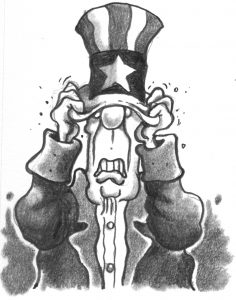 They were cannon fodder for the United States.

I stood on the wind-swept Kalowa Hill in the northern Iraqi city of Sulaimaniya as Pershan Hassan, a stocky 53-year-old woman, clambered quickly up the dirt track leading to where a mass grave was being excavated. She clutched a framed black-and-white picture of a boy. She pushed her way through the crowd that was looking down at the unearthed remains of dozens of bodies. Suddenly, she let out a gasp of pain and recognition as she saw the skeletal remains of her 13-year-old son, Shafiq. A faded blue blindfold was wrapped tightly around his skull. The casings from spent bullets were scattered around his dark brown bones.

“I know him by his clothes,” she whispered, her voice breaking as she lifted the garments and kissed them. “I raised him without a father.”

Kalowa Hill is a metaphor for the tragic history of the Kurds. I remain haunted by the images of women searching frantically through skeletal remains in uncovered pits for their disappeared children or husbands.

It was December 1991, after the first Iraq war. Saddam Hussein had ruthlessly crushed a Kurdish revolt in the aftermath of Iraq’s defeat that spring by the United States and its allies. Two million refugees had fled toward Turkey and Iran in April 1991. Many froze to death in the snow-covered mountain passes as they tried to escape. The international community, responding to the heartbreaking images, created havens for their return in northern Iraq, forcing Baghdad to withdraw its troops.

I spent months with the Kurds as a reporter for The New York Times after the Iraqi withdrawal, including living and sleeping with seven Kurdish, or peshmerga, bodyguards after Baghdad offered bounties of $1,000 for the murder of Western reporters and aid workers in the Kurdish region. Several of my colleagues were killed or badly wounded. …