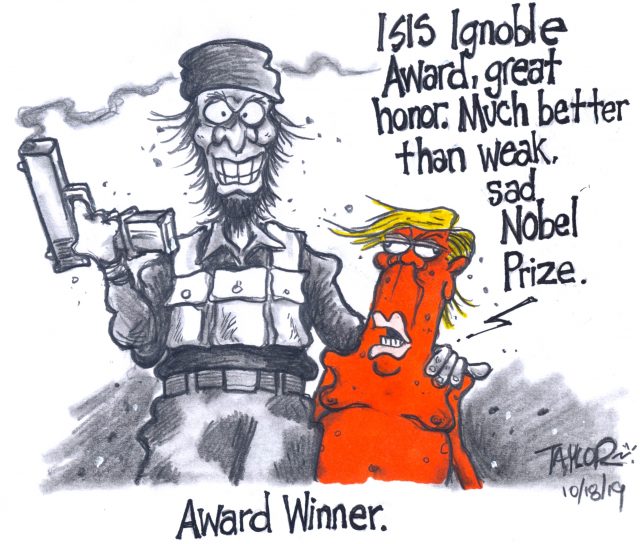 “Trump’s promises to end the ‘crazy, endless wars’ have proven to be just another cynical ploy by this supremely cynical politician and con man.”

“The president is talking about genocidal slaughter and hundreds of thousands of war victims like it’s a playground squabble.”

Just hours after U.S. President Donald Trump downplayed Turkey’s assault on Kurds in Syria by likening it to a parking lot squabble, Amnesty International on Friday presented damning evidence that Turkish forces and their allies have committed war crimes and displayed a “shameful disregard for civilian life” in northeastern Syria.

“In one of the most horrific attacks documented,” Amnesty said, “a Kurdish Red Crescent worker described how he pulled bodies from the wreckage of a Turkish airstrike on 12 October at around 7 am, in which two munitions landed near to a school in Salhiye, where civilians displaced by the fighting had sought shelter.”

The aid worker told Amnesty that four people, including two children, were killed in the Turkish strike.

“I couldn’t tell if they were boys or girls because their corpses were black. They looked like charcoal,” he said. “The other two people killed were older men, they looked older than 50. Honestly, I am still in shock.”

The report also highlights the case of Hevrin Khalaf, a Kurdish female politician and Secretary General of the Future Syria political party who was “dragged out of her car, beaten, and shot dead” on October 12 by fighters with Ahrar al-Sharqiya, a Syrian rebel group allied with Turkey.

“A medical report seen by Amnesty International lists a series of injuries inflicted on Hevrin Khalaf,” the group said, “including multiple gunshot wounds to the head, face, and back as well as fractures to her legs, face and skull, detachment of skin from her skull, and loss of hair as a result of being dragged by the hair.”

Kumi Naidoo, secretary general of Amnesty International, said in a statement that “killing defenseless people in cold blood is utterly reprehensible and a blatant war crime.”

“The Turkish military offensive into northeast Syria has wreaked havoc on the lives of Syrian civilians who once again have been forced to flee their homes and are living in constant fear of indiscriminate bombardment, abductions, and summary killings,” said Naidoo. “Turkish military forces and their allies have displayed an utterly callous disregard for civilian lives.”

In addition to demanding that Turkey halt its attacks on northeastern Syria, Amnesty urged nations that export arms to the country to immediately suspend any weapons transfers.

“The USA is the largest exporter of weapons to Turkey,” Amnesty noted. “Other suppliers include Italy, Germany, Brazil, and India.”

Amnesty’s report comes after Trump—who paved the way for the Turkish military operation by abruptly withdrawing U.S. forces from northeastern Syria—made light of the humanitarian catastrophe in the region by comparing it to a parking lot scrap between “two kids.”

“Sometimes you have to let ’em fight,” Trump said during a campaign rally in Dallas, Texas. “Like two kids in a lot, you gotta let ’em fight, then you pull ’em apart.”

“The president is talking about genocidal slaughter and hundreds of thousands of war victims like it’s a playground squabble,” said S.V. Dáte, White House correspondent for HuffPost.

“To the U.S. Army who are leaving northeast Syria, tell your children that the children of the Kurds were killed by the Turks and you did nothing to protect them.”

In a gut-wrenching series of videos, Kurds holding signs confronted a convoy of massive U.S. tanks and trucks rolling out of northern Syria and into Iraq.

“Thanks for U.S. people, but Trump betrayed us,” read one sign.

Another said: “To the U.S. Army who are leaving northeast Syria, tell your children that the children of the Kurds were killed by the Turks and you did nothing to protect them.”

U.S. troops were emotional and tearful as they withdrew from Syria, and saluted their former comrades-in-arms, wrote Voice of America writer and specialist in Kurdish politics Mutlu Civiroglu, who posted the videos on Twitter, wrote. …

“Sen. Mitt Romney delivered perhaps the most thorough Republican rebuke of President Trump’s Syria withdrawal Thursday, calling Trump’s abandonment of the Kurds there “a bloodstain on the annals of American history.”

But while that line has gotten a lot of play, there’s something else Romney said that shouldn’t escape notice. He suggested Trump got bullied into the withdrawal by Turkey — and that he backed down.

“It’s been … suggested that Turkey may have called America’s bluff, telling the president they are coming no matter what we did,” said Romney, of Utah. “If that’s so, we should know it. For it would tell us a great deal about how we should deal with Turkey, now and in the future.”

“This is going to make the ISIS people very, very happy.”

[Editor’s Note: It would be nice to think one wouldn’t have to alert readers that the following is satire. However, during the reign of Trump the line between truth and satire often goes up — POOF! — in greasy smoke. — Mark L. Taylor]

“I am giving ISIS a group rate that entitles them to the full run of the golf course, the spa, you name it,” he said. “This is going to make the ISIS people very, very happy.”

The fighters can qualify for the group rate by presenting proof of ISIS membership and their recently freed status, Trump said.

Trump declined to say whether he would extend the same group rate to Kurdish fighters in Syria. “I’m not a fan of the Kurds,” he said. “Where were the Kurds in 1776 when George Washington took control of the British airports?”

Shortly after Trump made the offer to ISIS, however, the group’s leader, Abu Bakr al-Baghdadi, issued a lukewarm response.

“We’ve read some not-so-great things about the Doral on TripAdvisor,” Baghdadi said. “If we wanted to go to a golf resort, we’d pick one that doesn’t have bedbugs.”

“Good news: We finally found someone in the Middle East to greet us as liberators. The bad news is it’s Isis.”