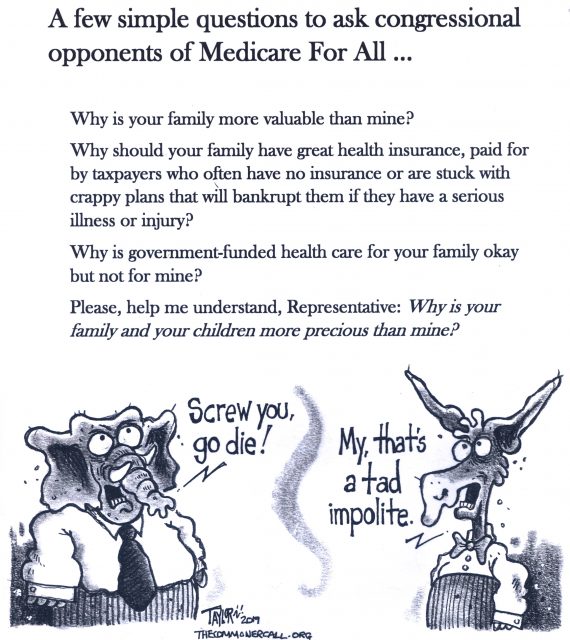 “I get a little bit tired, I must say, of people defending a system which is dysfunctional, which is cruel. Eighty-seven million uninsured, thirty-thousand people dying every single year, five-hundred thousand going bankrupt—for what reason?—they came down with cancer.”

During a portion of Tuesday night’s Democratic debate focused on healthcare, Sen. Bernie Sanders interjected to castigate some of his 2020 primary rivals—namely former vice president Joe Biden and South Bend, Indiana Mayor Pete Buttigieg—for again repeating right-wing talking points against Medicare for All and defending the primacy of the for-profit insurance industry.

“I get a little bit tired, I must say, of people defending a system which is dysfunctional, which is cruel,” Sanders said, as he cast glances at Biden and Buttigieg. “Eighty-seven million uninsured, thirty-thousand people dying every single year, five-hundred thousand going bankrupt—for what reason?—they came down with cancer.”

“I will tell you what the issue is here,” Sanders continued. “The issue is whether the Democratic Party has the guts to stand up to the healthcare industry which made a $100 billion in profits; whether we have the guts to stand up to the corrupt, price-fixing pharmaceutical industy which is charging us the highest prices in the world for prescription drugs. If we don’t have the guts to do that—if all we can do is take their money—we should be ashamed of ourselves.”

Applause for Sanders’ comment followed, with former labor secretary and economist Robert Reich stating, “No one can match Bernie Sanders for righteous indignation about our screwed-up system.”

Thank you! There are too many plans out there that seem more interested in protecting corporate profits than protecting the lives of working Americans. We need #MedicareForAll, and we need it now.

And the Pod Save America team put it simply: “Bernie Sanders is tired of your shit on healthcare in America.”

Link to Story and 50-second Video

Vermont Sen. Bernie Sanders is no friend of billionaires, which had the potential to make things pretty awkward at the Democratic debate on Tuesday night, seeing as he was sharing the stage with one. When CNN moderators asked Sanders about his claims that billionaires shouldn’t exist, the question seemed to directly target former hedge fund entrepreneur Tom Steyer, who is worth an estimated $1.6 billion and was standing only a few feet away.

Sanders played it safe, saying “if you’re asking me that the wealthy should start paying their fair share of taxes … that’s exactly what I believe.” But Steyer wasn’t shy when he was given the floor to respond: “Sen. Sanders is right,” he said. “There have been 40 years where corporations have bought this government and those 40 years have meant a 40-year attack on the rights of working people and specifically on organized labor. The results are as shameful as Sen. Sanders said.” … Read the Rest

(Cartoon and photos by Mark L. Taylor, 2019. Open source and free for non-derivative use with link to www.thecommonercall.org )