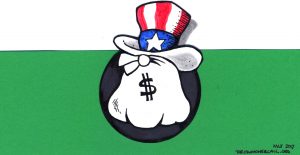 The latest batch of fundraising reports released this week confirmed a new reality of presidential politics: the traditional, big-dollar model of funding a presidential campaign is going the way of landlines and the VCR.

And they both blew past the ones who did.

Warren and Sanders, who raised $25.3 million, both finished about $10 million ahead of former Vice President Joe Biden for the quarter.

Biden, meanwhile, fell back in his fundraising, posting $15.2 million – about $7 million less than he raised the previous three months. And other Democrats who relied on traditional, big-dollar fundraisers also slipped, presaging difficulties financing robust campaigns.

Sen. Kamala Harris’ reported haul of $11.6 million came in slightly lower than her second quarter. And though South Bend Ind., Mayor Pete Buttigieg posted $19.1 million, that number was down, too, from the previous three months, when he raised $24.8 million.

“The fact that progressives combined to raise $50 million without one fundraiser is mind-boggling,” said Rebecca Katz, a progressive consultant who advised Cynthia Nixon in her primary campaign against New York Gov. Andrew Cuomo last year. “And really exciting, because they showed there’s a better way to do this.”

The quarterly fundraising reports marked a victory for the progressive wing of the Democratic Party. And its effects were felt more broadly than on the candidates’ bottom lines. …

Clarification To The Above Article…

This is an interesting piece and it clearly documents how profoundly grassroots funding for campaigns can affect the political landscape in the U.S.

Politico, the publication, and David Siders, the author, include a perfunctory assertion that Joe Biden is still the frontrunner and favorite. They quote a Morning Consult poll to establish that. Morning Consult has been consistently more bullish on Biden’s position in the race than other polls.