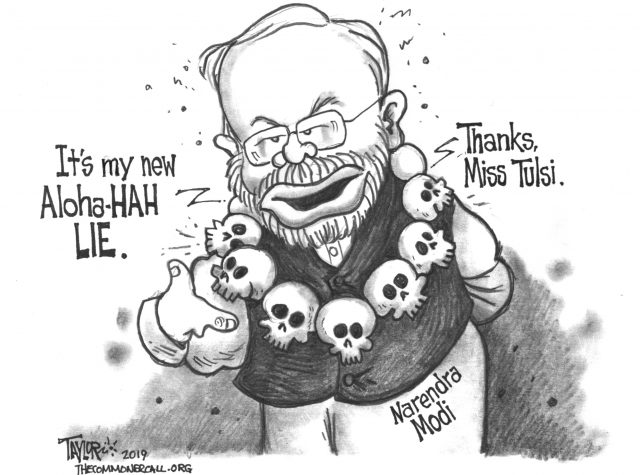 The greatest diplomatic triumph for the American Sangh was rehabilitating Modi’s tainted reputation in the United States. Gabbard played a significant part in that project.

TULSI GABBARD, a United States Congresswoman, entered the historic First Unitarian Church of Los Angeles to the strains of Marvin Gaye’s “Ain’t No Mountain High Enough.” She shook hands with her cheering fans, leaped on stage with a smile, accepted a garland of white flowers from a supporter, folded her hands in greeting and said, “Aloha.” It was a sunny Saturday morning in March 2019, and she was campaigning for the Democratic Party’s nomination for president. Addressing an animated crowd of hundreds, she urged them to “stand together.” The 38-year-old representative for Hawaii’s second congressional district, who frequently refers to herself as a “Karma Yogi,” declared that the nation is divided. “What we are seeing is this dark shadow caused by a corruption of spirit that is ruling our land,” she warned—a clear reference to the polarisation of Trump’s America.

Gabbard called for a range of changes in domestic policies: fixing a broken healthcare system, reforming criminal justice, providing affordable housing and addressing the climate crisis. Reckoning with the “cost of war,” she said, is central to carrying out this vision of change. As a major in the US Army National Guard—a reserve component of the US armed forces—and a veteran of the war in Iraq, she denounced “wasteful regime-change war policies.” America’s foreign policy, she argued, is creating a new Cold War that puts it at “greater risk of nuclear catastrophe than ever before in history.”

“All of us here share the happiness of your family and loved ones on this important day,” he read from Modi’s letter. “On behalf of our prime minister, I invite the newly-wed couple to celebrate their honeymoon in the land of devas,” he added. He then delivered gifts from Modi—a pashmina shawl and a Ganesh statuette.

Outside the venue, around two dozen people had gathered to protest. They were neither irate protestors opposing her domestic policies nor activists angered by her stance on America’s wars. They were people such as Baljit Kumar, a young Dalit refugee residing in nearby Riverside. “She supports the people I ran from in India,” Kumar told me. Claiming that Gabbard’s congressional campaign financing is heavily augmented by American affiliates of the Rashtriya Swayamsevak Sangh—the parent organisation of India’s ruling Bharatiya Janata Party—protestors held bold red, white and blue signs proclaiming her “Prince$$ of the R$$.” Since 2015, a handful of articles in online Western media outlets have speculated about Gabbard’s perceived closeness to the Indian prime minister, Narendra Modi, and the BJP.

The mood inside the hall was different. As she concluded her speech, the crowd chanted: “Tulsi! Tulsi!” The emcee, Jimmy Dore—a comedian who hosts a popular YouTube show, and is a Gabbard supporter—opened the floor up for questions. As hands went up all around, he pointed to me. Aware that my prepared question was about to strike a discordant tone, I removed my hat and glasses.

“It is getting serious,” Gabbard joked.

“In your first two terms in office, you met the RSS spokesperson at least three times,” I said. “You spoke at many RSS events, including two in India. When did your collaboration with the RSS begin and how much money have they given you?”

The usually unflappable Gabbard, who speaks with slow deliberation, grimaced. She paused long enough for an audience member to shout, “Speak up.” Finally she responded. “I am a soldier, and I took an oath,” she began. “One oath in my life. That was an oath to serve and protect this country, to put my life on the line for the people of this country.”

She grew more emphatic. “We stand for aloha. We stand for diversity. We stand for peace and bringing people together around these shared ideals of freedom and opportunity for all people.” Gesturing to the audience to stand, she continued, “Thank you everybody for standing with me. It is this kind of attacks that are rooted in religious bigotry that we must stand together and condemn. Whether these attacks are being targeted at Hindus, or Buddhists, or Muslims, or Jews, or atheists, or Catholics, we must stand united and condemn this hate and bigotry because an attack against one of us is an attack against all of us.” Again, the crowd chanted, “Tulsi, Tulsi.”

This is typical of how Gabbard responds to questions about the depth of her relationship with Modi, her association with affiliates of the Sangh Parivar—the family of organisations working with the RSS—or the identity of many of her key donors. Such queries are dismissed as signs of “Hinduphobia.” When an article in The Intercept described her as “a rising progressive star, despite her support for Hindu nationalists,” Gabbard lashed out with an opinion piece for Religion News Service, headlined: “Religious bigotry is un-American.” She said her critics were “trying to foment anti-Hindu sentiment.”

Yet, as they say, the devil is in the details. …

Gabbard was embraced early on by pro-Modi elements of the Hindu-American diaspora in the U.S., who have donated generously to her campaigns.

LONG BEFORE THE Indian strongman Narendra Modi became prime minister of the world’s largest democracy, he was a prominent leader of the Hindu right. He rose as a public figure through the nationalist organization Rashtriya Swayamsevak Sangh, or RSS, whose ideology includes a desire to carve out a Hindu nation in which Muslims and Christians are considered second-class citizens. It was a well-known activist who once had links to the RSS who assassinated Mahatma Gandhi, accusing him of appeasing Muslims during the bloody partition of the Indian subcontinent.

That anti-Muslim sentiment has been a major driving force of Modi’s political career in the Bharatiya Janata Party, or BJP. In 2002, when Modi was chief minister of the state of Gujarat, he oversaw an outbreak of violence by Hindu nationalists against the minority Muslim population that resulted in the deaths of more than 1,000 people. Local and international fact-finding groups accused Modi of complicity in the killings, charging that he did not do enough to contain the violence. Indian courts eventually exonerated him for a lack of evidence, but his image was pilloried. The United Kingdom and some European countries refused to deal with him and in 2005, the United States barred him from entering the country.

Modi’s ascent has normalized nationalist rhetoric, the silencing of dissent, and violence against religious minorities in India — and it’s also had global implications. Elected prime minister in 2014, he was one of the first of a class of populist autocrats who’ve risen to power in recent years. That group includes Egypt’s Abdel Fattah al-Sisi, who was elected in the same month as Modi; Turkey’s Recep Tayyip Erdogan, who’s been in office for more than a decade but has been increasingly consolidating power; Rodrigo Duterte of the Philippines, whose war on drugs has killed thousands of people; Brazil’s Jair Bolsonaro, who was elected in October despite his pro-military dictatorship stance; and, of course, America’s Donald Trump.

In the United States, Modi’s reputation has been helped by a group of Hindu-American supporters with links to the RSS and other Hindu nationalist organizations, who’ve been working in tandem with a peculiar congressional ally: Rep. Tulsi Gabbard, D-Hawaii, the first Hindu in Congress. …

Trump, introduced by Modi as “my friend, a friend of India, a great American president”, was given a standing ovation at the event in Houston.

Narendra Modi defended his government’s actions in Kashmir and, in thinly-veiled remarks, accused Pakistan of harbouring terrorists during a packed rally in Texas attended by the US president Donald Trump.

Trump sat in the front row as the Indian prime minister told cheering crowds his decision to remove all autonomy from Indian-administered Kashmir would bring progress and better rights for its people.

India has faced international criticism over its actions in Kashmir. Thousands of people have reportedly been detained, and access to mobile or internet services has been severed for millions of people in a communications blackout, part of a security clampdown in the wake of Delhi’s decision.

The rally, on Sunday, marked the first time Modi had discussed the decision to remove Kashmir’s special status on a world stage, and followed months of fierce rhetoric from Pakistan, which also claims the disputed region and has sought to raise the issue with the UN. …