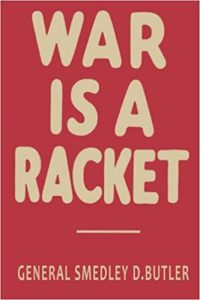 Commoner Call reader Gary Ebben forwarded this History Channel documentary on the 1933 fascist ‘Wall Street Putsch’ to overthrow President Franklin D. Roosevelt to stymie his attempts at the reform necessary to rescue the nation from the Great Depression and to weave a few strands of decency into the national government and economy.

To channel the anger of the veterans Bonus Marchers and to have some popular credibility, a cadre of fascsit-loving mega-wealthy Wall Street plotters approached retired Major General Smedley Butler — of “War Is A Racket” fame — to lead the revolt. Butler, who was a Quaker and two-time congressional Medal of Honor winner was a widely known national hero and champion of the Bonus Marchers.

Too few remember that the fascist elements we see now on the rise in the nation  were a growing movement in 1930’s America with Nazi sympathizers and outright uniformed American Nazis — then as now — proudly struttiing down American streets.

Fortunately for America, Butler gathered information on the plot then blew the whistle to the media, bringing the open effort to a halt. Unfortunately, given the plot was among the wealthy ‘elite’ — those of FDR’s social class — the plot was soon papered over by the FDR administration resulting in the media backing away from the story and nobody ever paid a price for the treason as the nation shifted its attention and energy into ramping up for WW II.

The end of the  film is rather odd as the producers themselves neatly pat down the seriousness of what happened and question just how serious the plot was. My guess is that with the families of those Wall Street fascist plotters still very much in charge of both political parties, the Congress, Supreme Court, presidency and economy the History Channel didn’t want to piss off potential sponsors and regulators. Still, the documentary is worth watching and noting the similarities to today.

You can access selected quotes from Butler’s “War Is A Racket” here.

When The Bankers Plotted To Overthrow FDR

It was a dangerous time in America: The economy was staggering, unemployment was rampant and a banking crisis threatened the entire monetary system.

The newly elected president pursued an ambitious legislative program aimed at easing some of the troubles. But he faced vitriolic opposition from both sides of the political spectrum.

“This is despotism, this is tyranny, this is the annihilation of liberty,” one senator wrote to a colleague. “The ordinary American is thus reduced to the status of a robot. The president has not merely signed the death warrant of capitalism, but has ordained the mutilation of the Constitution, unless the friends of liberty, regardless of party, band themselves together to regain their lost freedom.”

Those words could be ripped from today’s headlines. In fact, author Sally Denton tells weekends on All Things Considered host Guy Raz, they come from a letter written in 1933 by Republican Sen. Henry D. Hatfield of West Virginia, bemoaning the policies of Franklin Delano Roosevelt.

Denton is the author of a new book, The Plots Against the President: FDR, a Nation in Crisis, and the Rise of the American Right.

Link to Story and 6-Minute Audio