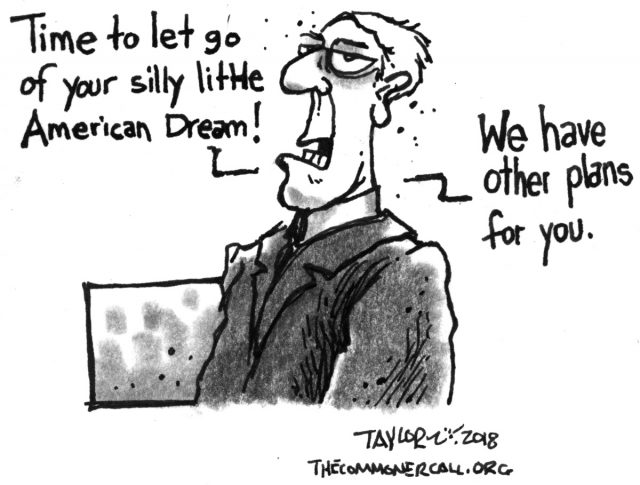 The best analogy I can think of to characterize what passes for political “debate” in America these days, is a bunch of people stuck in a rubber life raft with a big leak hissing away, drifting in the midst of a vast ocean surrounded for as far as they can see by starving sharks, while a few “leaders” insist on arguing about 1) whether there’s a leak; 2) whether to patch it; and 3) what to patch it with.

The people in the raft—who can’t hear their leaders—are fed information back from a few who are close to the leaders portraying the argument as if it’s reasonable, and the rest of the passengers look on, stunned, as the life raft continues to deflate, and the sharks begin to salivate.

The root cause of just about every problem facing America is about as obvious as a circling shark. Specifically, that monied interests – corporations and a few ultra-rich families and individuals — have complete control over our political process; the national parties; much of our media; key parts of academia, foundations, not-for-profits, and the paid punditocracy.

In short, while we’ve spent trillions on national defense to safeguard our freedoms from outside threats, a silent coup, four decades in the making, has successfully taken over the country, lock, stock, and barrel from within.

“While we’ve spent trillions on national defense to safeguard our freedoms from outside threats, a silent coup, four decades in the making, has successfully taken over the country, lock, stock, and barrel from within.”

Let’s look at some of the key challenges facing our country, and the role of monied interests in obscuring the nature of the problem and the kinds of solutions needed fix it.  We’ll start with the core problem.

Neutering the power of “we the people”

The electoral process and the vote are designed to give people power and a voice in their governance. Elected officials who are answerable to their constituency are the cornerstone of a free people. But that requires three things:

Sadly, all three have been systematically undermined by the oligarch’s coup.

As Jefferson said, a free press and an informed populace is fundamental to a functioning democracy. But corporations and vested interests have systematically undermined the free press by 1) eviscerating the Federal Communications Commission and the rules designed to assure accuracy and diversity in news; 2) by buying up news media until today, 90 percent of the media is controlled by just five corporations ; and 3) by mounting a sophisticated propaganda campaign to discredit government and glorify the free market.

As a result, too many Americans are ill-informed or uninformed.  They hear the hissing, they see the sharks circling, and feel the raft sinking, but they don’t know why.

How about a process that safeguards the individual’s voice in votes?  Here too, there’s been a systematic attempt to undermine the one-person, one-vote standard.  Gerrymandering is often portrayed as a bi-partisan problem, because one state, Maryland, Gerrymandered Democratic districts.  In truth, only the Republicans have been implementing a strategic, well-funded, national effort to Gerrymander the vote.  But it doesn’t stop there.  Republicans have been systematically using things like voter ID’s, inadequate polling facilities, caging voters, and other impediments to voting to depress the number of Democratic voters participating in elections.

Which brings us to checks on abuse of power. Since the 1860’s, corporations have been working to get a greater role in the political process, and it reached its zenith in Citizen’s United, which basically allowed money to foul the political process. The sophistic argument that restricting money in an election is a constraint of free speech has won the day.  Think about this a moment.  Spending massive amounts of “money” is a form of “free” speech.  Kind of boggles the mind a bit, doesn’t it?  You can almost hear the air hissing out of the life raft.

The result of this is that “we the people” have only a “miniscule” effect on the policies  our government pursues, while corporations, vested interests and the elite essentially dictate them.

Allowing the greatest heist in history to go on, unimpeded

The three richest people in the US have more wealth then the bottom half of the population do.  From 1975 until 2014 the economy more than doubled in the US, but virtually none of that wealth went to the average individual. In their landmark study, Picketty, Saez and Zucman found that between 1980 and 2014 the bottom 50 percent of earners saw no gain in their income, while the income for the top 1 percent tripled. It hasn’t changed much since 2014, either, despite reaching full employment. Measured by GDP, some $10 trillion was added to the economy in that time, and the bottom 50 percent saw none of it.  This was a direct result of neoliberal policies initiated by Reagan when he assumed office and pursued by both Democrats and Republicans since then.  These policies were, in turn, dictated by a self-interested oligarchy that controlled the reins of government.

In contrast, after World War II, New Deal progressive economics produced the second longest and most equitably shared period of economic growth in US history. This too was a result of policies – only this time they were policies the oligarchy objected to.

Listen, hear that hissing sound? That’s democracy foundering on the inevitable crumbling of social norms as our society is divided between haves and have nots, while ignorant demagogues and neoliberal centrists capitalize on the unrest, and on uniformed voters to steal elections.

Ignoring, then soft-pedalling, the greatest threat humanity has ever faced

Climate change is a fact—like gravity, or the sun rising in the east, or water flowing downhill.  And it’s a grim fact.  Since 1988 scientists have been warning against the epochal changes it will cause, but the media and the politicians have been ignoring it or soft-pedalling it the whole time.  Even today, the neoliberals in charge of the Democratic Party refuse to prohibit their candidates from accepting money from fossil fuel interests, while they howl at the “cost” of trying to mitigate it. Why?  Well, fossil fuel interests have bought and paid for some candidates, and vowed to make life difficult for others.

The list of problems getting buried by money is nearly endless.  Gun control; health care; a living wage; the high cost of education; endless war; each is rooted in the power of the oligarch’s coup, and each is a function of money in politics.

But only two candidates – Sanders and Warren — address this issue head on in the debates, and to hear the media, the pundits’ and the Party’s post mortem, both are “extreme” and the guy who’s debating whether the lifeboat needs a patch is “reasonable” and the best bet for winning the election.

But we the people know better.  The only danger is that if the neoliberal elite manage to trump the people’s wisdom with money, power and influence the way they did in 2016, we’ll get 4 more years of Trump.