““Climate change. Gun safety. Health care. On the face of it, these three are totally different issues. But despite our being the strongest and wealthiest country in the history of the world, our democracy is paralyzed. Why? Because giant corporations have bought off our government.

“[Trump is] “corruption in the flesh”, but emphasized the problem is much bigger than just him). We need to take a deep breath and recognize that a country that elects Donald Trump is already in serious trouble.””

I wanted to start with a positive. Sen. Elizabeth Warren has long said it’s next to impossible to make the necessary political changes without tackling corruption – I believe her.

Warren’s speech was delivered before an enthusiastic audience estimated at 20,000 in Washington Square (Manhattan), adjacent to the location of the 1909 ‘Triangle Shirtwaist Fire’ that killed 146 garment workers.

Warren’s “My Plan to End Washington Corruption” can be read here.

There is a connection with the saga of Trump’s ongoing Russia connections and corruption. While Warren spoke out against corruption, Trump spent the week demonstrating that his politics are all about power with corruption as a just reward.

That story broke wide open – as if the media did learn from the first episode.

To explain this I give the lead to lawyer, never-Trumper and spouse to Trump counselor Kellyanne Conway, George Conway III, and former Obama administration acting solicitor general and Georgetown law professor, Neal Katyal.

Trump has done plenty to warrant impeachment. But the Ukraine allegations are over the top.

After literally dozens of media reports that edged the storyline forward, it turns out Trump’s open-back-door not-quite-quid-pro-quo pressure on a new Ukrainian government to dig up anti-Biden dirt while he ‘ponders’ (in other words, held up) their $250 million in military assistance looks to be the center of the whistleblower complaint. We can’t know since in violation of the law, the Trump administration hides the ‘story’ while repeating his role as ‘witch hunt’ victim.

“That’s exactly what appears to be at issue today. A whistleblower in U.S. intelligence lodged a complaint with the intelligence community’s inspector general so alarming that he labeled it of “urgent concern” and alerted the Office of the Director of National Intelligence. Though the details remain secret, apparently this much can be gleaned: The complaint is against the president. It concerns a “promise” that the president made, in at least one phone call, to a foreign leader. And it involves Ukraine and possible interference with the next presidential election. The complaint is being brazenly suppressed by the Justice Department — in defiance of a whistleblower law that says, without exception, the complaint “shall” be turned over to Congress.

“We also know this: As he admitted Thursday night on CNN, the president’s personal lawyer, Rudolph W. Giuliani, has been trying to persuade the Ukrainian government to investigate, among other things, one of Trump’s potential Democratic opponents, former vice president Joe Biden, and Biden’s son Hunter about the latter’s involvement with a Ukrainian gas company.”

Trump gets credit for a singular honest moment – he said he’d violate federal election law AGAIN if there was an opportunity. “I think I’d have to take it”, he admitted to ABC News’ George Stephanopoulos in June.

That timing fits well in the timeline of Trump’s conversations with Ukrainian President Volodymyr Zelensky and the shenanigans of Trump clown-lawyer Rudy Giuliani. Here’s an excellent timeline.

Illegal? Corruption — yes. Trump is using the military aid money as leverage – which directly benefits his Russian love interest, Putin, as the military aid is meant to counteract Russian annexation of Crimea and the ongoing intrusion in eastern Ukraine. Familiar but worse suggest Conway/Ketyal?

“The current whistleblowing allegations, however, are even worse. Unlike the allegations of conspiracy with Russia before the 2016 election, these concern  Trump’s actions as president, not as a private citizen, and his exercise of presidential powers over foreign policy with Ukraine. Moreover, with Russia, at least there was an attempt to get the facts through the Mueller investigation; here the White House is trying to shut down the entire inquiry from the start — depriving not just the American people, but even congressional intelligence committees, of necessary information.”

The CNN interview has clown-lawyer Giuliani doing his now familiar ‘he didn’t do it, he did, it’s not illegal’ getting-ahead-of-the-story routine. Trump and Giuliani can no longer say it was ‘a campaign in disarray’, can’t say ‘no one knew any better’ – this is a president manipulating a foreign government for political advantage. The best CNN Cuomo-Giuliani exchange has Cuomo asking, “So, did you ask Ukraine to look into Joe Biden?” Giuliani responds, “Of course I did.”

As the authors point out, Impeachment is the Constitutional remedy for “Treason, Bribery, or other Crimes and Misdemeanors”. (Emphasis added to the quote from the Conway/Katyal article)

The whistleblower information caused Inspector General Michael Atkinson to judge “credible” with corroboration beyond a single source, which made this an “urgent concern” rising to a standard for congressional intelligence committees notice.

But that didn’t happen because the White House and administration claimed, “involves confidential and potentially privileged communications.”

Blake’s article is a good primer. He ends with his 9th question, “How bad is this for Trump and his presidency?” Blake’s remark echoes Conway and Katyal.

“In the background are other highly controversial things Trump has done, most notable being his potential obstruction of justice in the Russia investigation. But thus far, public support for impeachment is far short of a majority, and Republicans, who control the Senate and can easily prevent Trump’s removal from office, have shown no appetite for going down that road. Democrats have thus proceeded somewhat timidly. And with the 2020 election approaching, they might reason that the election would be the best way to decide how Trump is held accountable.”

Sorting out the corruption

But this is not the ONLY legal crisis Trump faces.

While Tribe offers the legal case for how Trump and his administration cannot block a state-level subpoena for his tax filings, that’s not as important and his explanation of Trump’s legal argument which boils down to Trump having legal immunity from ‘everything’ while in office. It is worth watching. The argument claims Trump can’t even be investigated.

Tribe also ends by tying in the whistleblower Trump legal exposure. So much Trump corruption.

A few loose ends from previous stories I’ve highlighted. One has Sen. Leader ‘Moscow Mitch’ McConnell finally acquiescing to pressure to approve $250 million “to help states guard against outside (election) interference”. My short version, don’t be fooled, the funding leaves a lot of ‘known’ problems unaddressed.

In the category of Trump/Giuliani have no shame, while they argue Trump did nothing illegal and besides, he can’t even be investigated – here is clown-lawyer meeting with the Russian/Ukrainian businessman Lev Parnas, head of a subpoenaed Trump super PAC that “appears to have violated federal law”. No shame.

And then there was this involving Trump campaign money questions: Trump Super PAC Turns Over Docs Linked to Sketchy Corporate Donation.

I jumped on the ‘Dems impeachment ineptness’ in my last column, but a more well reasoned opinion credits the House Judiciary appearance by former Trump campaign manager Lewandowski as more strategic. The theory – who better than Lewandowski to demonstrate the legal inanity to Trump’s ‘no sitting president can even be investigated’ defense. Tribe’s comments above lend credence. 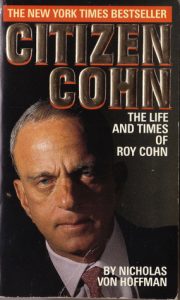 Trump’s hero, Roy Cohn, would be proud. Cohn was Sen. Joseph McCarthy’s brutally, crookedly contemptuous lawyer and political trickster. Trump has famously cried, “Where’s my Roy Cohn?” The movie, “Where’s My Roy Cohn?” was just released, the timing is convenient given Trump’s déjà vu moment intending to again power his way over and through law and convention.

Is Trump above the law? Remember, Republicans vote.