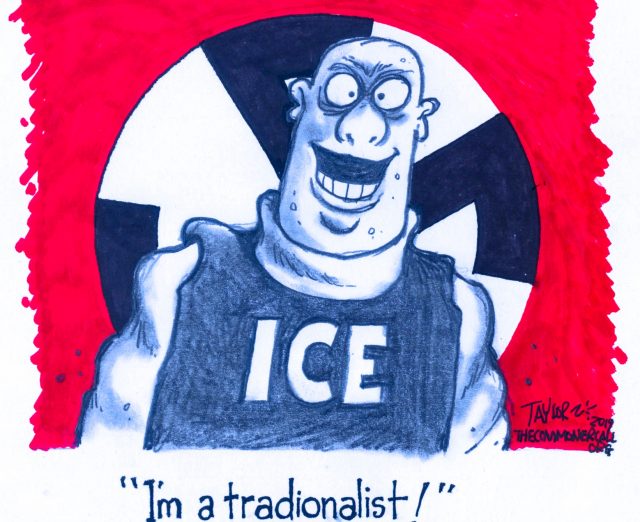 Philip Zimbardo, whose work explored the psychology of cruelty: America under Trump is a “nightmare situation”

Thousands of migrant and refugee children have still not been reunited with their families. Many may never be returned to their parents.

Children being held in Donald Trump’s concentration camps and other detention centers have been sexually assaulted by staff members.

A new lawsuit against the Trump administration alleges that Trump’s ICE and Border Patrol enforcers are abusing teenage girls and young women by denying them proper sanitary products, leaving the girls in bloody clothes and refusing to allow them to properly bathe. The same lawsuit claims that children are made to fight for the food that guards throw on the floor in their cages.

Mental health experts have continued to document that children in these camps are suffering from post-traumatic stress disorder — and will likely experience negative long-term effects far into their adult lives.

Again, it’s the conformity. So if one of your fellow guards is doing something cruel, it gives you permission to also do it. Very few people are willing to step up in those situations by being different, by speaking out or doing something to stop it.

The administration has announced it will now ignore the Flores agreement, which since 1997 has mandated a minimum standard of humane care for unaccompanied minors held in government custody. Now children may be held indefinitely, and more migrant and refugee families will be detained.

The Trump regime would like to deport sick and dying immigrants who are in the United States to receive urgent medical care. People may well die as a direct result of these actions.

Military veterans — many of whom have served in Iraq, Afghanistan and other theaters of war — are now subject to deportation if they happen not to be American citizens.

In total, this is a pattern of systemic abuse by the Trump regime against a group of nonwhite people it has designated as being outside of normal society, and not covered by basic human rights protections.

Understanding the threat of the Lucifer Effect

I recently spoke to Zimbardo about Donald Trump’s concentration camps, how ICE and Border Patrol and other Trump enforcers rationalize their cruelty against migrants and refugees, and what these inhumane policies reflect about our president’s mental health. Zimbardo also discussed the way Trump’s supporters are attracted to his cruelty because of their cult-like relationship with him — a relationship that represents a dire threat to the safety of our country and the future of our democracy. …