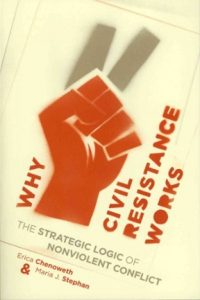 How a small active minority can change the world.

In 1986, millions of Filipinos took to the streets of Manila in peaceful protest and prayer in the People Power movement. The Marcos regime folded on the fourth day.

In 2003, the people of Georgia ousted Eduard Shevardnadze through the bloodless Rose Revolution, in which protestors stormed the parliament building holding the flowers in their hands.

Earlier this year, the presidents of Sudan and Algeria both announced they would step aside after decades in office, thanks to peaceful campaigns of resistance.

In each case, civil resistance by ordinary members of the public trumped the political elite to achieve radical change.

“There weren’t any campaigns that had failed after they had achieved 3.5% participation during a peak event,” says Chenoweth – a phenomenon she has called the “3.5% rule”.

There are, of course, many ethical reasons to use nonviolent strategies. But compelling research by Erica Chenoweth, a political scientist at Harvard University, confirms that civil disobedience is not only the moral choice; it is also the most powerful way of shaping world politics – by a long way.

Looking at hundreds of campaigns over the last century, Chenoweth found that nonviolent campaigns are twice as likely to achieve their goals as violent campaigns. And although the exact dynamics will depend on many factors, she has shown it takes around 3.5% of the population actively participating in the protests to ensure serious political change.

Chenoweth’s influence can be seen in the recent Extinction Rebellion protests, whose founders say they have been directly inspired by her findings. So just how did she come to these conclusions?

A long tradition of change

Needless to say, Chenoweth’s research builds on the philosophies of many influential figures throughout history. The African-American abolitionist Sojourner Truth, the suffrage campaigner Susan B Anthony, the Indian independence activist Mahatma Gandhi and the US civil rights campaigner Martin Luther King have all convincingly argued for the power of peaceful protest.

Yet Chenoweth admits that when she first began her research in the mid-2000s, she was initially rather cynical of the idea that nonviolent actions could be more powerful than armed conflict in most situations. As a PhD student at the University of Colorado, she had spent years studying the factors contributing to the rise of terrorism when she was asked to attend an academic workshop organised by the International Center of Nonviolent Conflict (ICNC), a non-profit organisation based in Washington DC. The workshop presented many compelling examples of peaceful protests bringing about lasting political change – including, for instance, the People Power protests in the Philippines.

But Chenoweth was surprised to find that no-one had comprehensively compared the success rates of nonviolent versus violent protests; perhaps the case studies were simply chosen through some kind of confirmation bias. “I was really motivated by some scepticism that nonviolent resistance could be an effective method for achieving major transformations in society,” she says.

Working with Maria Stephan, a researcher at the ICNC, Chenoweth performed an extensive review of the literature on civil resistance and social movements from 1900 to 2006 – a data set then corroborated with other experts in the field. They primarily considered attempts to bring about regime change. A movement was considered a success if it fully achieved its goals both within a year of its peak engagement and as a direct result of its activities. A regime change resulting from foreign military intervention would not be considered a success, for instance. A campaign was considered violent, meanwhile, if it involved bombings, kidnappings, the destruction of infrastructure – or any other physical harm to people or property. …

‘Why Civil Resistance Works: The Strategic Logic of Nonviolent Conflict’