We are at a turning point. Poor and working-class people have always known that the deck is stacked against us, but in recent years many of us have become even more cynical about the formal political system. On the one hand, Alexandria Ocasio-Cortez and Rashida Tlaib have been joined by a cohort of openly socialist local and state  elected officials from across the country. On the other, Republican voter suppression efforts only exacerbate the fact that many, many people have given up. Voters aren’t interested in Democrats who vote like Republicans and capitulate while Donald Trump calls open season on our communities.

Yet between the teacher strikes and the Puerto Rican general strike that helped oust the island’s corrupt governor, it’s clear that the working class is realizing that we still hold immense power, should we choose to exercise it. Socialists will play an indispensable role in building the solidarity across differences and collective fearlessness it will take to win not just in the political realm, but outside of it as well, in the streets and in our workplaces. 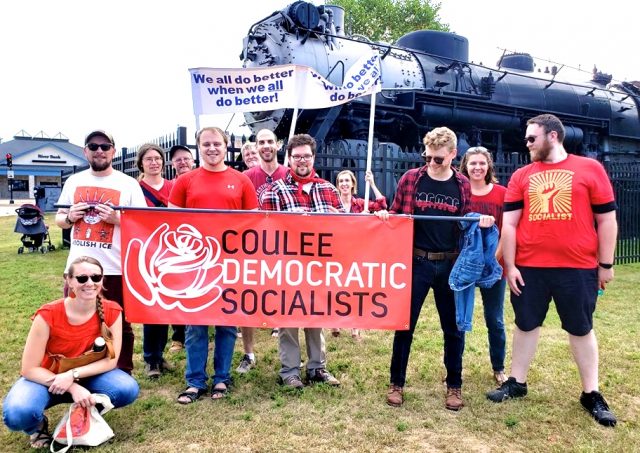 Some of the members of the Coulee Democratic Socialists participated in the recent Labor Day parade in La Crosse.

I write this a week after our convention. Being with comrades from all corners of the country, sharing organizing lessons and love was extraordinarily energizing and strengthened the bonds we will need in the coming period. Upon hearing about the union-busting Mississippi ICE raids on the day Donald Trump visited El Paso and Dayton, our national Immigrant Rights Working Group immediately organized with the national office and southern members to make solidarity plans. Yet how we react to what I call Trump’s shock and awe is but one piece of our strategy.

The proactive piece of our strategy is how we fight for our vision for an alternative to barbarism, and how we organize, not just mobilize, to win. Watching the floor debates and hearing the conversations during the convention, I see that using the intense democratic process spanning months to come to collective decisions helped build collective ownership of our plans.

We also debuted an update to our core national training modules. Mobilizing is something DSAers do well, but it will take deeper organizing to ensure that a higher percentage of members are active in our chapters and that more chapters are running strategic campaigns to take power from the capitalist class. Puya Gerami’s interview with Jane McAlevey in this issue elaborates on this concept, and our training updates draw from our series of mass organizing calls with McAlevey this summer. In addition to revamping our trainings, we’re also co-organizing a Rosa Luxemburg Stiftung global webinar series with McAlevey starting in October.

I want to close by lifting up the paid and unpaid labor of folks working together to make the convention a success. In no particular order:

As new NPC member Maikiko James said during the short, inaugural meeting of the newly elected NPC immediately after the close of the convention, “We have a world to win — and save.”