Trump wants us to believe he never backs down, and that is a quality to be respected. Of course the reality is far different…

Simple example, hurricane Dorian was never going to strike Alabama yet Trump said it would and repeatedly stood by his forecast; remember, this is during a declared emergency when people are making potentially life-or-death decisions based on what they are told. Trump is so sensitive to how he is viewed that even after Dorian headed north from the Bahamas and was no longer likely to strike even Florida, Trump paraded his revisionist history of Dorian forecasts with his own, I imagine, Trump Sharpie marks to show a potential path to strike Alabama. 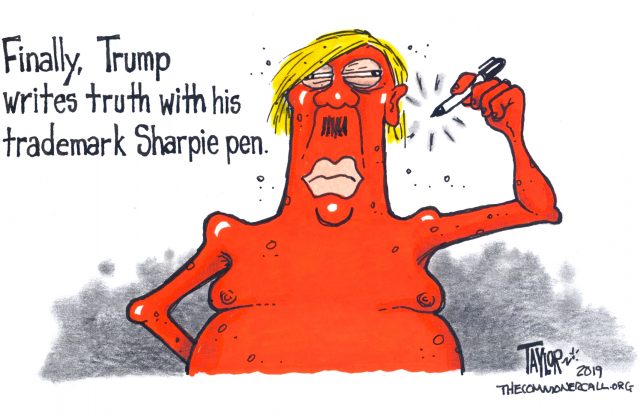 A more important example, Trump is trumpeting his ‘toughness’ in a trade war against China while admitting a weakness – the weakness is his unintended admission that China has no motivation to rush negotiation:

“…China would prefer it if a Democrat defeats him in 2020, because that Democrat would allow China to keep ripping us off.

““And then, think what happens to China when I win,” Trump boasts. “Deal would get MUCH TOUGHER! In the meantime, China’s Supply Chain will crumble and businesses, jobs and money will be gone!””

In the August 29th edition of the Russia Monitor I shared an article that reported farmers distrust of Trump’s assurances about ‘winning’. Here we have Trump betting on his trade war winning him the Rust Belt states that are the likely determinant of the 2020 election. But he has a problem.

Politico followed up with a related article sub-head: Trump faces a contracting U.S. factory sector, a narrow path to trade victories and investors spooked by recession risks — all before an election year.

“Trump is betting on a continuing robust economy in combination with his ‘toughness’ against China. Sadly…

“Trump’s economic record took another turn into dangerous territory Tuesday with a widely tracked gauge of the U.S. manufacturing sector contracting for the first time in more than three years, walloping the stock market and reigniting fears of a recession. It added to mounting concerns about a global economic slowdown under the weight of Trump’s trade war.”

“More than at any point in his presidency, Trump’s biggest asset looks like it could become a liability.”

On one side we have a slowing global economy, lower US consumer confidence, a contracting US manufacturing sector and a spooked equities market. On the other hand we have a hurricane forecasted to strike Alabama, Trump ignoring signs of a North Korean nuclear submarine and ransomware attacks against US cities, Trump promising Putin an invite to his Mar-A-Lago hosted G7 meeting, and now Trump adds US Fed Chair Jerome Powell to his ‘enemies’ list tweeting, ““My only question is who is our bigger enemy, Jay Powell or Chairman Xi?”

The tweet is reported by The New Yorker writer Susan Glasser as part of, “Trump’s Wacky, Angry, and Extreme August”.

North Korea has always been presented as “one of” the sources of ransomware attacks against US cities or cyberattacks. North Korea has denial of allegations of $2 billion earned through cyberattacks on banks and cryptocurrency exchanges.

Now we have this ransomware report about Russian criminals:

“The activity comes from a Russia-based group CrowdStrike dubbed Wizard Spider, which operates a banking trojan known as TrickBot. That virus has been frequently associated with the Ryuk ransomware, which has been identified as the culprit in at least 13 public-sector cyberattacks since last October, including several that elicited six-figure payouts from local governments in Georgia, Florida, and Indiana, and most recently a school district in New York.

““It’s big-game hunting,” Adam Meyers, CrowdStrike’s vice president of intelligence, told StateScoop last week. “What they’re doing is getting into the environment with a banking trojan. Then they get to a system where they can exploit the ransomware.””

The author describes these attacks as aimed at the “”soft underbelly” in local governments, which often lack strong internal cybersecurity capabilities”. One might say: like state and local election systems?

But there’s more than one way to game an election; I recently reported on how Senate Leader Mitch ‘Moscow’ McConnell is crippling the Federal Election Commission (FEC) so it can’t make decisions.

And here is exactly the Trump/Republican benefit of McConnell’s corruption. By FEC rules, this is a violation: Pro-Trump super PAC paid thousands to firm owned by Trump’s campaign manager.

“A company that President Donald Trump’s campaign manager, Brad Parscale, says he owns has received hundreds of thousands of dollars from the President’s flagship political action committee, which is barred from coordinating with the campaign.”

“This is a perfectly legal and appropriate arrangement, which is firewalled, with zero chance for coordination,” he said in a statement. “There could not possibly be coordination because the ads placed were for other candidates in the 2018 midterms. Everything is in FEC compliance.”

But similar to the Vox article:

“It calls into question the independence of the super PAC,” said Larry  Noble, the former general counsel to the Federal Election Commission and a CNN contributor. “One would hope a watchdog agency would investigate allegations of coordination.”

“Noble said the FEC has been “lax” about enforcing coordination rules.  The FEC was further weakened by the resignation of one of its commissioners this week, reducing the number of sitting commissioners to three and thereby stripping it of its power to enforce campaign finance laws.”

It is a damning article but given the circumstances with the FEC, likely a non-starter for campaign violations.

But there are even worse examples of election cheating…

The sub-head reads: On the eve of regional elections, the Kremlin has turned to tricks, threats and shows of force to get past the shadows of protests and falling approval ratings for Russia’s president.

““Less than a month before Moscow tries online voting for electing the city’s new parliament, a French cryptographer has just exposed a security breach for the protocol being tested,” the two institutions said in a statement.”

What’s the worst that could happen, Putin candidates getting 110% of the vote count?

Except it did happen here.

Watch the short video of a person unable to vote for a candidate:

“The issues emerged Tuesday morning, with one Facebook user posting a video showing a touch-screen voting machine changing their selection from Waller to Reeves.

““It is not letting me vote for who I want to vote for,” the voter says in the video. “How can that happen?” a woman in the background asks.”

So what you say, how bad can all this be? Trump is arbitrary, unpredictable, loves his authoritarian mates, who says any of that is a problem?

“One former senior Justice Department official, who worked closely with the former special counsel Robert Mueller when he was the FBI director, told Insider Trump’s behavior was “directly out of the Putin playbook. We have a Russian asset sitting in the Oval Office.””

“A former CIA operative told Insider the evidence is “overwhelming” that Trump is a Russian asset, but another CIA and NSA veteran said it was more likely Trump was currying favor with Putin for future business deals.”