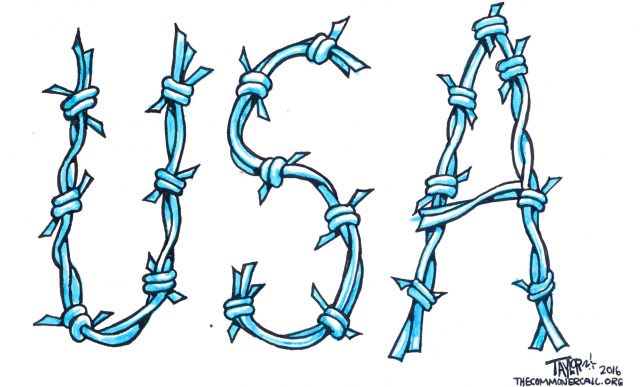 It seemed, somehow, like a necessary, if modest, gesture of solidarity with the people sitting for months on end in holding pens in the desert.

Toward the end of this hideous week of gun massacres and Presidential tantrums, I found myself manacled at the ankle to a bench in a holding cell in the basement of a police station in the upstate New York city of Glens Falls, wondering if it was a useful place to be.

On Thursday morning, I’d left my house in the Adirondack forest and driven an hour out of the mountains to Glens Falls. It’s not a glamorous city—it built its prosperity on paper mills—but I’ve always felt at home there. My daughter was born in the Glens Falls Hospital; I researched parts of my first book in the stacks of its fine Crandall Public Library; it is “town” in this part of the world. But it’s not Vermont, where I now live most of the year, or Brooklyn, or San Francisco, or the other sorts of places where people are more likely to engage in civil protest. Warren County, which it anchors, is classic rural red: Trump territory in the 2016 election, and by a fairly sizable margin.

So, when friends told me that there’d be a protest in support of the immigrants being held in detention centers on the southern border, I wondered if anyone would show up. About seventy-five people were gathered in leafy City Park when I arrived, which seemed to me a good turnout, even if many of them had driven north half an hour from the considerably hipper city of Saratoga Springs. For an hour, people listened to earnest speeches—including one from a Skidmore professor recently back from Texas with grim tales of separated families—and to folk songs, and to a rabbi blowing a shofar with considerable vigor.

And then we walked three or four blocks through the center of town, chanting, “No More Hate!,” until we were outside the office of Representative Elise Stefanik, a Republican, who represents New York’s Twenty-first Congressional District. When we arrived, a crowd perhaps a third the size of our group was already in place, carrying Trump banners and chanting their own slogans: “Americans before illegals,” “Build the wall,” and “Four more years.” (One woman was holding a sign that just said “capitalism,” and only because she was wearing a maga hat could I be sure of her politics.) It was tense, especially since the local police—unaccustomed, I think, to this sort of thing—simply stood by and let the two sides face off. …