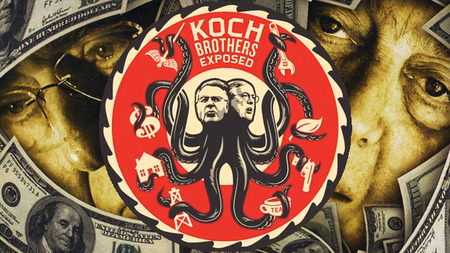 [Editor’s Note: Given the impact of the surreptitious Koch brothers’ machinations in Wisconsin a review of their role in American politics is in order. There pernicious influence on universities is especially dangerous. This is a good, concise review. Be sure to watch all the way through the credits at the end. — Mark L. Taylor]

The last time we exposed the Koch Brothers’ dealings to the world we here at Brave New Films wound up in their crosshairs. They produced online ad campaigns attacking us, but, it takes more than a banner ad to slow us down.

Two years ago when we made this film very few people knew who the Koch Brothers were or what the Koch Brothers were doing. But now, we so strongly believe that everyone should know what is happening that with your help and donations we are able to offer the film for free. We want to make sure everyone has an opportunity to see the truth.

(5:11) How the Koch Brothers use Citizens United to corrupt democracy

(17:11) Koch University: Rewriting your Education Is your school on the list http://www.bravenewfilms.org/koch_get…

(40:52) How the Koch Brothers Cause Cancer by dumping their toxic waste everywhere