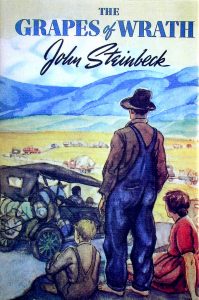 “I want to put a tag of shame on the greedy bastards who are responsible for this.”

In March 1938, shortly before he began working on The Grapes of Wrath, John Steinbeck wrote to his agent Elizabeth Otis to turn down a commission to write about migrant workers.

“The suffering is too great for me to cash in on it … it is the most heartbreaking thing in the world,” he wrote. “I break myself every time I go out because the argument that one person’s effort can’t really do anything doesn’t seem to apply when you come on a bunch of starving children and you have a little money. I can’t rationalise it for myself anyway. So don’t get me a job for a slick.”

Then came the famous line: “I want to put a tag of shame on the greedy bastards who are responsible for this.”

He spoke to people who had lost loved ones, and women whose children had died because they were unable to produce the milk to feed them.

There’s no avoiding the irony that The Grapes of Wrath would soon make Steinbeck one of the richest writers in the world. But there’s also no reason to doubt his sincerity. Instead of writing for a slick, he wrote for himself, knuckling down in the early summer of 1938, giving himself a 100-day deadline to write the novel that would provide that tag of shame. He wrote in a lined ledger at the rate of 10,000 words a week. He told a friend that he had never worked so hard – and intended to rip his “reader’s nerves to rags”.

He also shredded his own. “This must be a good book, it simply must. I haven’t any choice,” he confided in the diary he kept while writing. “For the first time I’m working on a real book that is not limited … It will take every bit of experience and thought and feeling that I have.”

The entries became increasingly fraught. “I hope I’m not heading for a nervous breakdown,” he wrote. And then: “My nerves are going fast … I wish I could go to a furnished room some place where I know no one and just disappear for a while. I wish that.” And then: “I’m afraid this book is going to pieces. If it does, I do too.”

This furious effort has since passed into legend; not least because the urgency Steinbeck dedicated to his craft is so clearly replicated in the sincerity and passion of The Grapes of Wrath. But like plenty of legends, it doesn’t tell the whole truth …