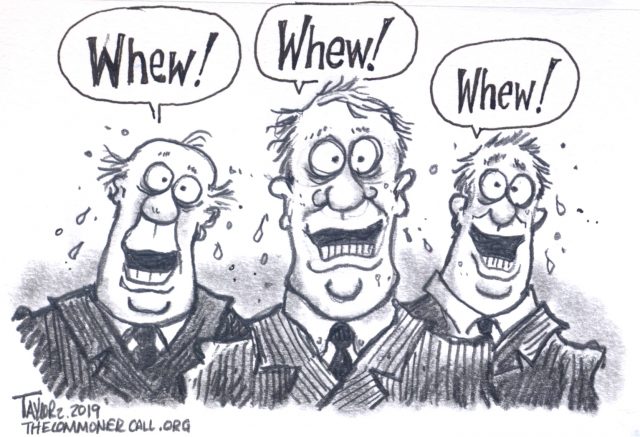 Absolutely nobody is going to believe any official story that comes out about this. From The New York Times:

Mr. Epstein hung himself and his body was found this morning at roughly 7:30. Manhattan federal prosecutors last month charged Mr. Epstein, 66, with sex trafficking of girls as young as 14, and details of his behavior have been emerging for years.

How in the hell do they let this happen? The guy was incarcerated in the Manhattan Correctional Center. He already had made one try. He had to be on suicide watch. And the suicide happens the day after a massive document dump in which a woman who said she was one of Epstein’s victims implicates an entire brigade of celebrity “clients,” up to an including some European royalty? There almost can’t be a dog more reluctant to hunt than this one.

A whole bunch of Somebodies need to get fired behind this. Beyond it, of course, a thousand conspiracy theories will now bloom across all the Intertoobz. The other people involved have to be nervous. Ghislaine Maxwell, Epstein’s alleged accomplice who has yet to be charged, has to be looking over her shoulder. Is she looking over her shoulder to see if the FBI is back there, or to see if something darker is closing in? This country is losing what’s left of its mind.

We’ll Have To See: Epstein’s Friends Just Lost Any Chance Of Having Penthouse Evidence Tossed By Courts

[Editor’s Note: Let’s hope the future of the Epstein child sex abuse case plays out as the headline to this story suggests. Perhaps I’m too much of a cynic confronted by one travesty after another of the twisted privileges afforded the wealthy and powerful in our warped American ‘Just-us’ system, but let’s hope the case moves forward and the criminals involved are brought to justice, no matter who they are or how much money they have filched. — Mark L. Taylor]

The news of wealthy financier Jeffrey Epstein committing suicide in a federal facility in Manhattan has sparked a number of wild theories online, including that he may have been bumped off by some unspecified person close to him to prevent evidence from surfacing about the other well-connected people to whom he may have trafficked children.

But in reality, as a former federal prosecutor told Courthouse News reporter Adam Klasfeld, Epstein’s death could make it easier, not harder, to bring Epstein’s co-conspirators to justice. …

Jeffrey Epstein’s apparent suicide in a US federal jail has launched a range of conspiracy theories online, fuelled by Epstein’s ties to princes, politicians and other famous and powerful people.

Online theorists offered unsubstantiated speculation – some retweeted by Donald Trump – that Epstein’s death was not suicide, or was faked.

Hours after Epstein’s death on Saturday, as the hashtag #EpsteinMurder was trending worldwide, the president joined Twitter speculation around Epstein’s death under the federal government’s watch.

Trump, who rose to conservative prominence by falsely claiming Obama was born outside the US, retweeted unsubstantiated claims about Epstein’s death.