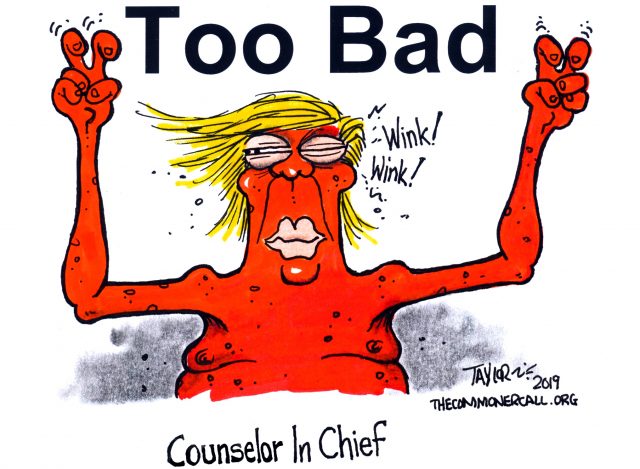 “My Rhetoric Brings People Together”: Trump Has An Untruthful Take On His Anti-Immigrant Slurs

Heading out the door to visit the mass shooting sites of Dayton and El Paso, President Donald Trump denied that his repeated anti-immigrant slurs had anything to do with either massacre — even the one carried out by a man who echoed Trump when he referred to Hispanics and immigrants as “invaders.”

Like the El Paso shooter, Trump has called the migrants who come to the U.S. “invaders” in the past. In fact, he has repeatedly used the term “invasion” in press conferences and in tweets and at his rallies across the country. “I was badly criticized for using the word ‘invasion,’” he once said of the so-called migrant caravan.

The criticism has ramped up dramatically since authorities revealed the El Paso shooter’s hate-filled screed, posted online minutes before he opened fire at the Walmart, warned of a “Hispanic invasion,” with many critics drawing a direct link to Trump. …

‘We could have sold it four times’: Deadbeat Trump Jokes To First Responders About El Paso Speech Where He Owes Community $500,000

President Donald Trump went to El Paso, Texas in wake of a white supremacist attack that quoted the president’s own words. The president went to El Paso last year and he still owes the city about $500,000 for the security costs.

While spending the evening with people reeling from a horrifying shooting that killed nearly two dozen people, Trump bragged about his crowd size in El Paso. He also signed books for his supporters, calling it “an amazing day.”

At the hospital, Trump was met by people he called heroes, but the group didn’t see all that enthusiastic to see him. One woman standing behind him seemed to be averting her face from the cameras.

You can watch the videos below…

Read the Rest and Videos

Reporter Calls Out Trump To His Face: You & El Paso Shooter Use The Same ‘invasion’ Rhetoric

A reporter called out President Donald Trump to his face for spreading the same racist rhetoric as a gunman who killed 21 people in El Paso.

The president spoke briefly with reporters Tuesday morning as he prepared to board Air Force One for Dayton, where another gunman killed nine people hours after a man targeted Hispanic shoppers at a Walmart store in Texas.

Trump and the El Paso gunman used the same “invasion” rhetoric to slur Latino migrants, and a reporter confronted the president about those similarities on the White House lawn.

“You and the shooter in El Paso used that same language,” said the unidentified reporter. “Do you regret that?”

“You and the shooter in El Paso used that same language,” said the unidentified reporter. “Do you regret that?”