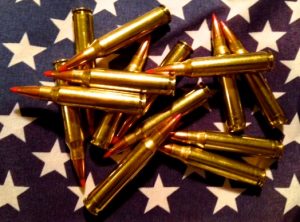 “The president may not be pulling the trigger or planting the bomb, but he is enabling much of the hatred behind those acts.”

On Saturday [8/3] morning, a gunman at a Walmart in El Paso, Texas, shot and killed at least 20 peoplebefore surrendering to the police. By all accounts, Patrick Crusius, the 21-year-old alleged shooter, is a fan of President Donald Trump and his policies. According to the Southern Poverty Law Center, “a Twitter account bearing the suspect’s name contains liked tweets that include a ‘BuildTheWall’ hashtag” and “a photo using guns to spell out ‘Trump.’”

Incredibly, the nation woke up to more grim news on Sunday, with reports that a man suited up in body armor and bearing a rifle with high-capacity magazines had carried out a rampage in Dayton, Ohio, killing at least nine people and injuring 26.

Little is known yet about the Dayton shooter, but a four-page manifesto authorities believe was written by Crusius and posted shortly before the El Paso attack is full of the kind of hateful rhetoric and ideas that have flourished under Trump.

Over the past four years, both mainstream media organizations and leading Democrats have failed to draw a clear line between Trump’s racist rhetoric and the steadily multiplying acts of domestic terror across the United States. Some of us tried to sound the alarm — but to no avail.

The manifesto declares the imminent attack “a response to the Hispanic invasion,” accuses Democrats of “pandering to the Hispanic voting bloc,” rails against “traitors,” and condemns “race mixing” and “interracial unions.” “Yet another reason to send them back,” it says.

Sound familiar? The president of the United States — who condemned the El Paso attack on Twitter — has repeatedly referred to an “invasion” at the southern border; condemned Mexican immigrants as “rapists” and Syrian refugees as “snakes;” accused his critics of treason on at least two dozen occasions; and told four elected women of color to “go back” to the “crime infested places from which they came.” (It is worth noting that Crusius, in his alleged manifesto, claims his views “predate” and are unrelated to Trump, but then goes on to attack “fake news.”)

That there could be a link between the attacker and the president should come as no surprise. But it might. Over the past four years, both mainstream media organizations and leading Democrats have failed to draw a clear line between Trump’s racist rhetoric and the steadily multiplying acts of domestic terror across the United States. Some of us tried to sound the alarm — but to no avail.

“Cesar Sayoc was not the first Trump supporter who allegedly tried to kill and maim those on the receiving end of Trump’s demonizing rhetoric,” I wrote last October, in the concluding lines of my column on the arrest of the so-called #MAGAbomber. “And, sadly, he won’t be the last.”

How I wish I could have been proven wrong. Yet since the publication of that piece almost a year ago, which listed the names of more than a dozen Trump supporters accused of horrific violence, from the neo-Nazi murderer of Heather Heyer in Charlottesville to the Quebec City mosque shooter, there have been more and more MAGA-inspired attacks. …

(Commoner Call photo 2018. Open source and free for non-derivative use with link to www.thecommonercall.org )