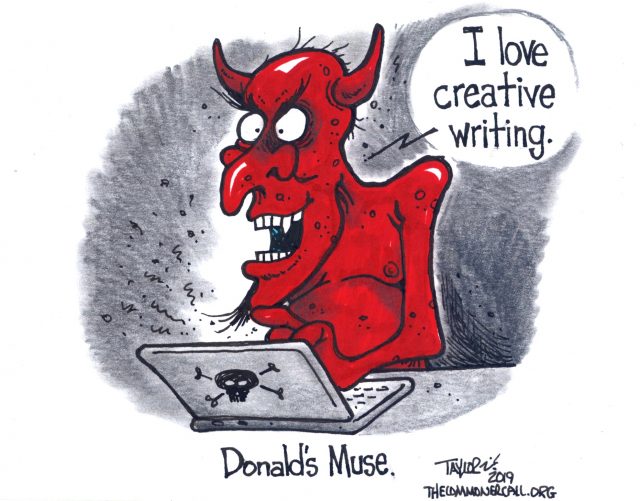 Language is a kind of virus, and history has shown many times that this virus can be lethal.

In the lead-up to the 2016 election, after Donald Trump referred to Mexican immigrants as “animals” and his supporters began chanting “Lock her up” about Hillary Clinton, it seemed as if a malevolent genie had been let out of a bottle. Now, almost three years later, it has become painfully clear just how cruel, powerful and destructive that hateful spirit is, and that the survival of our country, our culture – indeed of our humanity – may depend on resisting its demonic influence.

Research by political scientists at the University of North Texas has found that hate crimes increase by 226% in a community after it hosts a Trump rally.

Each time the president lashes out at his critics, each time he escalates the language of racism and hatred, it becomes harder to persuade ourselves that we live in a society that values civility, compassion and tolerance, a nation that respects the principles and ideals that inspired our founders. Each time we behave as if the best way to resolve our differences is not with debate and discussion but with death threats, exhortations to violence and demands that Americans leave the country they love enough to want to improve, we are damaging our sense of who we are, of who we want to be. And each time our children observe that a bully is in the White House, it gets harder to persuade them that bullying is unacceptable.

Language is a virus, wrote William Burroughs, and history has shown that this virus can be lethal. During the Rwandan genocide, a Hutu leader compared the Tutsi to cockroaches. The Nazi propaganda machine referred to Jews as vermin, and during the war in Bosnia, the Serbian media portrayed their Muslim neighbors as being less than fully human. Now our president calls the entire city of Baltimore “rat-infested”. It’s a terrible and dangerous thing to refer to human beings as animals and insects, to cage children as a warning to would-be migrants and to viciously malign one’s critics, particularly when those critics are people of color. Perhaps all those Maga hats should be refashioned as Mava hats: Make American Violent Again.

Because it’s not simply speech. Speech has very real consequences. …