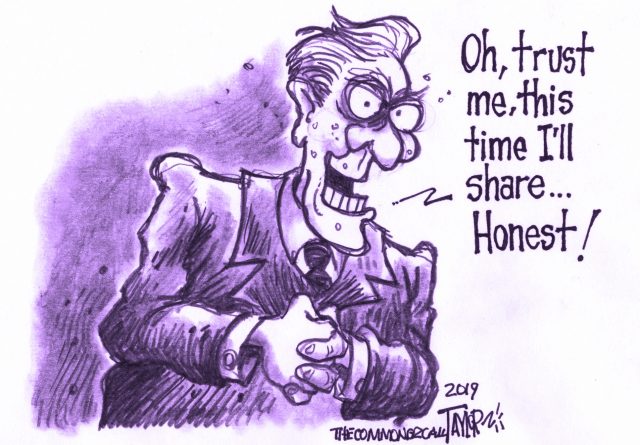 Ron Johnson joined 19 other GOP senators to urge Treasury to give the wealthy yet another massive tax cut via executive order.

A sitting U.S. president who can’t stop attacking black and brown people. A never-ending trade war that has necessitated more than one multibillion-dollar farm bailout. A humanitarian crisis on the border of his own state. These are just a handful of the many issues that Senator Ted Cruz could be focused on. Instead, he’s currently devoting his efforts to a much more important cause: demanding another tax cut for the rich, this time without Congress’s approval.

In a letter sent to Steve Mnuchin on Monday, the senator from Texas urged the Treasury Secretary to use his “authority” to index capital gains to inflation, a move that would almost exclusively benefit the mega-rich. Claiming, falsely, that the United States economy “has experienced historic levels of growth as a result of Congress and the current administration’s policies such as the Tax Cuts and Jobs Act,” Cruz insists that it is now crucial for the Treasury Department to adjust capital gains for inflation “so that everyday Americans can continue to enjoy better lives and livelihoods.” And by “everyday Americans,” he of course means (but doesn’t say) the spectacularly wealthy.

Missing from Cruz’s call for Mnuchin to use “executive authority” to end this “unfair” treatment of taxpayers, which was signed by 20 of his Republican colleagues, is the fact that, according to the Penn Wharton Budget model, a whopping 86% of the benefit of indexing capital gains to inflation would go to the 1 percent (and reduce annual tax revenue by an estimated $102 billion over a decade). Perhaps seeking to address this criticism, Cruz claimed that changing how capital gains are taxed “would…unlock capital for investment, increase wages, create new jobs, and grow the economy, benefiting Americans across all income levels.” In other words, he’s arguing that the executive branch should give the super-rich another tax cut and it’ll benefit everyone because of trickle-down economics which—checks notes—has never actually worked. Including in the case of the 2017 Tax Cuts and Jobs Act. …

The immediate numbers, in wake of the Republican tax bill, showed that corporations were not passing on the money they were getting from their hefty cuts. Just one year after the bill was passed, the rich were the only ones “winning,” according to Bloomberg News.

As of March 2019, the promise that the GOP tax cut would pay for itself has not proved to be true. Economists said at the time the tax cut was up for a vote, that it would add significantly to the deficit,  thus far it has.

“The tax cuts and the 2018 budget agreement cumulatively account for 46 percent of the projected 2019 deficit,” wrote the Pacific Standard. But Republicans and President Trump maintained the bill was paying for itself because it is “unleashing revolutionary economic growth.” Except, it isn’t. According to the Committee for a Responsible Budget, “the Tax Cuts and Jobs Act (TCJA) show that, regardless of the economic model used, the House tax reform bill will add to the national debt while only modestly improving economic growth.”

By April 2019, Americans learned the truth about the GOP tax bill and its impact on them. The low refund was a huge awakening for some Americans and an outright shock for those who suddenly owed money. …