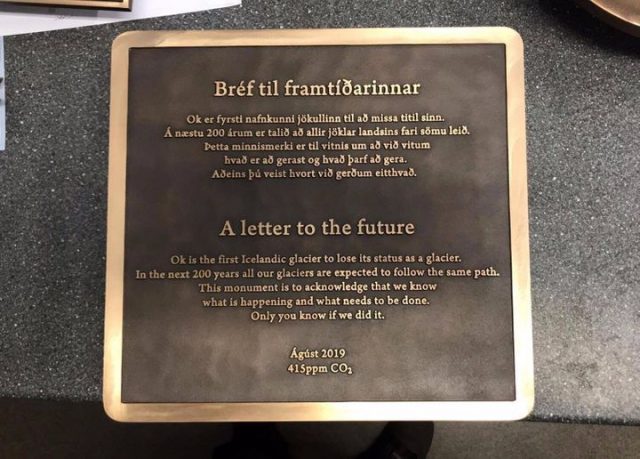 Scientists are memorializing Iceland’s first glacier lost to global warming with a poignant “letter to the future.”

Scientists are memorializing what they’ve described as Iceland’s first glacier lost to climate change with a somber monument and “letter to the future” reminding humans to do better at tackling global warming.

“This monument is to acknowledge that we know
what is happening and what needs to be done.
Only you will know if we did it.”

The monument is slated to be installed next month at the site of the now-extinct Okjökull glacier — nicknamed the “OK” glacier — in Borgarfjörður, Iceland, by researchers from Houston’s Rice University and members of the Icelandic Hiking Society.

The glacial gravestone remembers OK as the first of Iceland’s glaciers to lose its status as a glacier after warming temperatures caused much of its ice to melt. It also contains a warning about the dire outlook for Iceland’s 400 or so remaining glaciers and the urgent need facing humanity to tackle the threat of climate change. …
Read the Rest and Two Short Videos