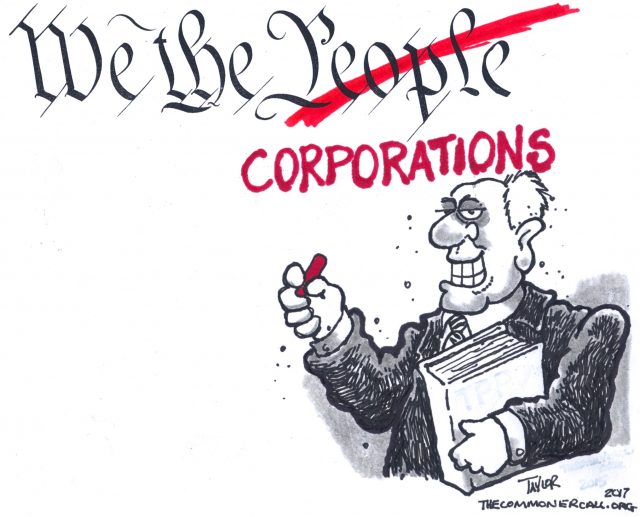 It’s often said that if Trump is reelected, it’ll be the end of democracy in America. But how could Trump get reelected, and how could democracy get wiped out in the USA?

Turns out, there’s an actual project to rewrite our Constitution, turning America into a corporate-run oligarchy.

They’d end the income tax, eliminate federal regulatory agencies like the EPA, end all labor protections (including laws against child labor), let states ignore anti-discrimination and other federal regulations, and impose term limits so the only “institutional memory” for legislatures will be the corporate lobbyists.

All it needs to succeed—within just a few short years—is for Trump and the GOP to win big in 2020. And the prospects of that happening are going up every day. With a big Trump win will come a rewrite of our Constitution itself, if the billionaires funding it have their way.

But how could he win? With another $2 billion worth of free publicity, just like in 2016.

One example is how Trump’s reelection campaign got a great boost recently when the media, just like in 2016, went all-Trump-all-the-time around his ICE raids, and when he told four congresswomen of color to “go home” to the countries of their ancestors—a racist trope for centuries.

The endgame here for Trump—and the right-wing billionaires who support him and the GOP—is not just to get reelected, but to actually rewrite our Constitution and end the American experiment.

The ICE raids were merely arrests of undocumented people who actually have committed crimes (beyond crossing the border) and currently have legal deportation orders already in place; they’re arrests like the ones Presidents Bush and Obama did daily.

There was nothing unique about them, and year over year, Trump has actually deported fewer people than Obama did.

But Trump tweeted the media into a frenzy, and like obedient hounds, they frantically ran after the bits of hamburger he threw their way.

As Ayanna Pressley noted Monday, the media shouldn’t “take the bait.” Nonetheless, literally every week—virtually every day—since Trump was elected, he’s gotten the media to put his name on the front page of the nation’s newspapers and at the top of the TV news shows.

And in America, as P.T. Barnum (whom Trump has cited as a role model) said, it doesn’t matter if publicity is positive or negative, “As long as they spell my name right.” And they always spell Trump’s name right.

As we saw with the 2015–2016 Republican primary, that Barnum-like daily publicity was all he needed to take down an entire field of competent, professional, and well-financed Republicans. Taking down Democrats may be even easier if he can paint the Democrats with his “open borders” and “Soviet-style socialism” lies (among others).

NBC trained Trump well; they spent millions teaching him how to do a reality show, from cliff-hangers to pitting “heroes” against “goats.” It’s one of the few things he’s actually good at. And instead of his old “Apprentice” weekly show, he’s now producing a daily show from the White House.

But to what end?

It’s looking more and more like the endgame here for Trump—and the right-wing billionaires who support him and the GOP—is not just to get reelected, but to actually rewrite our Constitution and end the American experiment.

The group leading this charge for the billionaires is called Citizens for Self-Governance (CSG), which SourceWatch.org says, “is a right-wing political organization … that is campaigning for an Article V convention to amend the U.S. Constitution.”

SourceWatch notes that, “Through its ‘Convention of States’ project, CSG promotes an effort to amend the U.S. Constitution pursuant to Article V, which provides that thirty-four states (two-thirds) can trigger a convention to propose an amendment, which must then be ratified by 38 states (three-fourths).”

They add, CSG director Eric O’Keefe “has deep ties to Charles and David Koch and has been a founder and funder of numerous right-wing groups including Wisconsin Club for Growth,” and the CSG, “Through its Convention of States project, is pushing for a constitutional convention in order to severely restrict federal power, for example by redefining the Commerce Clause to prohibit Congress from enacting child labor or anti-discrimination laws, or by adding a balanced budget amendment to the Constitution.”

And they’re actually doing it, complete with annual dress rehearsals in the Washington, D.C., area. As Wikipedia notes…

If you would like to better understand the people and fascist corporate forces behind what Hartman is writing about, check out this amazing book…