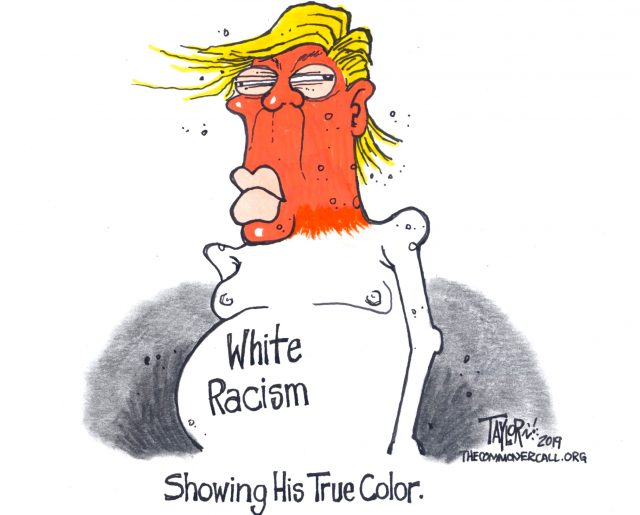 Want a response to a lawless & complete failure of a President?

He is the crisis.

His dangerous ideology is the crisis.

He needs to be impeached.

After the House late Tuesday passed a nonbinding resolution condemning President Donald Trump’s racist attacks on four Democratic congresswomen, outside progressives and lawmakers argued a “strongly worded” rebuke is not sufficient to hold the president accountable and called for impeachment hearings to begin immediately.

In a statement after the resolution passed largely along party lines—with just four House Republicans breaking from their party and joining the united Democratic caucus—CREDO Action co-director Heidi Hess said the vote “is not enough.”

“Donald Trump is a racist, and it’s good to see House Democrats finally calling him out for what he is,” Hess said of the resolution, which condemned Trump’s “racist comments that have legitimized and increased fear and hatred of new Americans and people of color.”

But Hess said Democrats must go further, a sentiment that was echoed across social media.

“House Democrats should stand with Reps. Alexandria Ocasio-Cortez, Ilhan Omar, Rashida Tlaib, and Ayanna Pressley when they push for greater accountability for the Trump administration,” said Hess. “And they should either pass Rep. Al Green’s articles of impeachment or immediately start an impeachment investigation in order to use all the power they have to try to remove a racist from the White House.”

The world is watching

Shortly following the passage of the nonbinding resolution Tuesday night, Green, a Democrat from Texas, introduced new articles of impeachment against the president—a move that was reportedly met with opposition by the Democratic leadership, including House Speaker Nancy Pelosi (D-Calif.).

“To condemn a racist president is not enough, we must impeach him,” Green said in a statement. “This will be a defining vote. The world is watching, and history will judge us all.”

Green read his impeachment resolution in full on the House floor late Tuesday:

“Therefore, Donald John Trump, by causing such harm to the society of the United States, is unfit to be president and warrants impeachment, trial and removal from office.”

As the Washington Post reported Tuesday, “Green’s move will force House Democrats to deal with the [impeachment] issue in the near term because of the privileged nature of the resolution.”

“Under House rules,” according to the Post, “Democratic leadership can decide to try to table the impeachment articles, effectively killing them for now and risk criticism from the party’s liberal base; refer them to the House Judiciary Committee for possible consideration; or allow the vote to proceed. If leaders do nothing, Green can force a vote on the impeachment articles in two legislative days.”

Green’s impeachment resolution comes just 24 hours after the four Democratic congresswomen targeted by Trump’s racist tweets said during a press conference that they will not be baited by the president’s attacks and reiterated their support for impeachment.

“I have not made impeachment central to my election or my tenure,” said Omar, a Minnesota Democrat and Somali refugee who Trump has singled out for particularly vile abuse. “But since the day that I was elected, I’ve said to people it is not if he will be impeached, but when. It is time for us to stop allowing this president to make a mockery out of our Constitution. It is time for us to impeach this president.”

Tlaib, a Democrat from Michigan, echoed Omar, aiming her message at Democratic leaders.

“I urge House leadership, many of my colleagues, to impeach this lawless president,” said Tlaib.

In a tweet following the House vote Tuesday night, The Nation‘s John Nichols expressed agreement with calls for Democrats to do more than pass a nonbinding condemnation of the president.

“The House vote to criticize Trump for being a scorching racist was fine,” said Nichols. “But I would prefer to impeach Donald Trump now.”

“There is no question that Donald Trump should be impeached and removed from office,” Nichols wrote in a column this week. “Nor is there any question that, as Rashida Tlaib reminds us, presidential racism is an appropriate place of beginning for the accountability moment that this country so desperately requires.”

Congresswoman Karen Bass said what needed to be said about Donald Trump’s “go back and help fix the totally broken and crime infested places from which they came…” tweet about progressive Democratic congresswomen.

Bass put things in perspective with that true statement, and with her counsel that as ICE raids target immigrant communities, “What we should be focused on right now though, ESPECIALLY today, is that racists also create racist policies.”

Presidential racism is an appropriate place of beginning for the accountability moment that this country so desperately requires.

It is appropriate to call Trump out for what Congresswoman Barbara Lee identifies as a “disgusting and racist attack.” It is appropriate to point out that the women he is attacking are Americans with roots in this country that, in some cases, go back further than those of this crudely divisive and destructive president. But it is not appropriate to be distracted by Trump. Not anymore. He has revealed himself again and again with racially incendiary statements, appointments, and policies. Now, he has gone to the next extreme. Congresswoman Alexandria Ocasio-Cortez speaks an essential truth when she explains that “telling four American Congresswomen of color ‘go back to your own country’ is hallmark language of white supremacists.”

So, now, the question is how to deal with Trump. And the best answer comes from one of the progressive Democratic woman he has so ardently and frequently targeted for abuse.

In tweets that were clearly intended to inflame prejudice against newly elected women of color such as Ocasio-Cortez of New York, Ayanna Pressley of Massachusetts, Ilhan Omar of Minnesota, and Rashida Tlaib of Michigan, among others, Trump argued that “‘Progressive’ Democrat Congresswomen” should “go back and help fix the totally broken and crime infested places from which they came.” (Ocasio-Cortez, Pressley, and Tlaib were born in the United States; Omar has been a US citizen her entire adult life.) …