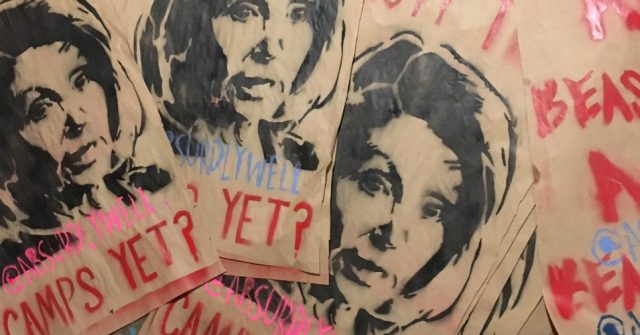 Instead of attacking members of Congress who are fighting to end the appalling conditions inside President Donald Trump’s immigrant detention facilities, House Speaker Nancy Pelosi should visit the camps to see firsthand the abuse taking place at the southern border.

That’s the message of a new pressure campaign by the Progressive Change Campaign Committee (PCCC), which slammed Pelosi for agreeing last month to pass a $4.6 billion border funding bill with no safeguards for immigrant children.

PCCC said in a petition circulated Thursday that Pelosi and other supporters of the legislation—including members of the conservative Blue Dog caucus—should see for themselves the mistreatment they are enabling by continuing to appropriate money for Border Patrol, ICE, and other agencies.

“Speaker Pelosi, visit the camps!” the petition reads. “And bring the conservative Democrats with you—so you can all see why Trump’s child abuse at the border needs to be reined in now.”

In an email to supporters late Thursday, PCCC said the border funding bill “gave Trump billions with no strings attached to help the kids and families trapped in dehumanizing camps.”

“Then,” said PCCC, “Pelosi attacked [Rep. Alexandria Ocasio-Cortez] for standing up for the families—further playing into the hands of Trump, [Senate Majority Leader Mitch] McConnell, and conservative Democrats!”

The campaign comes after posters urging Pelosi to visit the detention centers were plastered throughout Washington, D.C.

“Visit the camps yet?” read the posters, which were created by independent street artist Absurdly Well.

As Common Dreams reported last week, a group of lawmakers organized by the Congressional Hispanic Caucus toured two detention facilities in Texas and said they were horrified by what they witnessed.

“Now I’ve seen the inside of these facilities,” said Ocasio-Cortez after visiting an El Paso facility. “It’s not just the kids. It’s everyone. People drinking out of toilets, officers laughing in front of members Congress.”

“It is hard to understate the enormity of the problem,” the New York Democrat added. “We’re talking systemic cruelty with a dehumanizing culture that treats them like animals.”