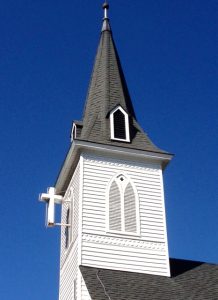 Below are six interviews conducted by Paul Jay for Reality Asserts Itself on the Real News Network of Madison native and liberation theologian Matthew Fox. When Fox and other courageous priests continued preaching the liberation theology of justice for the poor in Central America he was kicked out of the church by the the fascist supporting Pope John Paul II and Cardinal Joseph Ratzinger, Prefect of the Congregation for the Doctrine of the Faith and the future Pope Benedict XVI.

While targeting priests advocating for the poor, Ratzinger was one of the key modern figures covering up the church sexual abuse scandal.

As noted in his Wikipedia profile: “Matthew Fox is an American priest and theologian. Formerly a member of the Dominican Order within the Roman Catholic Church, he became a member of the Episcopal Church following his expulsion from the order in 1993. Fox was an early and influential exponent of a movement that came to be known as Creation Spirituality.”

These fascinating interviews provide a deep understanding of the relationship between the entrenched Roman Catholic Church hierarchy and fascist dictatorships around the world. The actions — and inactions — of the church impact everyone — Catholic and otherwise — globally. Fox helps explain why Pope Francis is targeted by right wing forces and why we may indeed have two popes with the “resigned” Ratzinger playing a far more active role behind the scenes hobbling Francis’ attempts at reform, especially on the child sex abuse scandal and climate crisis.

Former priest Matthew Fox discusses the book In the Closet of the Vatican, which depicts a “ring of lust” at the highest levels of the Church, and the campaign to hypocritically “weaponize” sexuality and bring down Pope Francis – on Reality Asserts Itself with Paul Jay

Link to 24-Minute Video and Transcript

Is Pope Francis Doing Enough To Root Out Sex Abuse In The Church?

Pope Francis announced new rules requiring pedophilia and sexual abuse to be reported to Church superiors, but survivors are critical, saying police need to be informed – on Reality Asserts Itself with Paul Jay.

Link to 14-Minute Video and Transcript

Marx, Catholicism & The Struggle For Justice

Now an Episcopalian priest, Matthew Fox tells of his coming to political consciousness and decision to join the Catholic priesthood, which he saw not as an escape, but as a way to stay in the world – Matthew Fox on Reality Asserts Itself with Paul Jay

Link to 21-Minute Video and Transcript

Former priest Fox talks about questioning the concept of original sin, the assassination of John Paul I, John Paul II reviving the Inquisition led by Cardinal Ratzinger, and the concept that there is no love without justice – Matthew Fox on Reality Asserts Itself with Paul Jay.

Link to 20-Minute Video and Transcript

A Theology Of The Poor Targeted By The Pope’s Inquisitor

Cardinal Ratzinger, who later became Pope Benedict, launched a campaign in defense of murderous dictatorships in Latin America and to purge the Church of liberation theology and priests like Matthew Fox – on Reality Asserts Itself with Paul Jay.

Sexuality & The End Of The Catholic Church

The refusal of the Church to purge abusers and pedophiles from the clergy and accept human sexuality as a blessing, is leading to the end of the Church as we know it, says Matthew Fox on Reality Asserts Itself with Paul Jay.Link to 2–Minute Video and Transcript