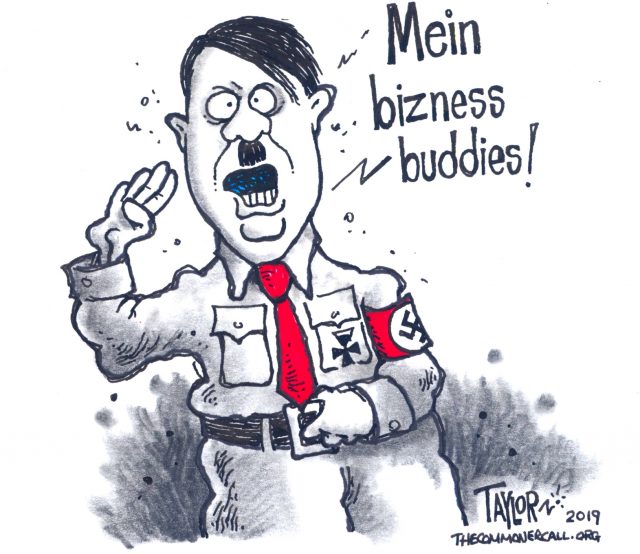 In the early years leading to Adolph Hitler’s rise to power 1930’s corporate Germany looked upon the odd, babbling little man from Austria with dismissive shrugs or disdainful amusement. Surely, no one would ever take the man seriously.

But as Hitler’s following of street thugs, unemployed, racists and social misfits grew and torch lit marauding street marches turned into more regimented affairs the German capitalists began to think perhaps Hitler could be massaged and manipulated to their ends. Corporate support, loans, gifts and larger and larger donations turned from a trickle to a flood as the Nazi movement gathered steam. Hitler was suddenly being chauffeured about Berlin and the provinces in a sleek new Mercedes Benz.

But the thing is his funders always thought they could control Hitler. After all, they were well educated, experienced men of the world. Surely, no match for a social misfit who at one point survived by hustling hand-painted post cards on street corners.

They thought they were taking a shih tzu for a stroll but soon found themselves chained to a rabid rottweiller.

No matter, corporate America is determined to cash in even as their fantasies of controlling the Gollum they have fed are about to go up in flames.

This past Monday the HuffPost carried a story that gives one pause: These Major Booksellers’ Description Of ‘Mein Kampf’ Sounds Like It Was Written By A Nazi.

The story’s subhead gives a good summary: Hitler’s manifesto was marketed on Amazon, Walmart, Barnes and Noble and Books-A-Million as “what we must do if we want to survive as a people and as a Race.”

Even more disturbing, the odd book price — $14.88 — is a code to far right extremists. Eighty-eight cents?

HuffPost reporter Jessica Schulberg noted: “The number 1488 is commonly used within neo-Nazi circles to convey a belief in white supremacy. Fourteen is a reference to the “14 words” slogan: “We must secure the existence of our people and a future for white children.” Eighty-eight stands for “Heil Hitler” (H is the eighth letter in the alphabet).”

The promotional blurb for the book translation by James Murphy noted it was the official translation of the Nazi party and reads like it was from some Nazi official book club:

“This book has set a path toward a much higher understanding of the self and of our magnificent destiny as living beings part of this Race on our planet. It shows us that we must not look at nature in terms of good or bad, but in an unfiltered manner. It describes what we must do if we want to survive as a people and as a Race. We have to understand that Nature does not forgive weakness and that the truth and reality is what it is, no matter how bad it may seem or how hard it can portray itself. This book shows the foundations of White Resistance and White Nationalism. It is the foundation and seed for the preservation of our Race.”

Walmart was pushing Mein Kampf in Facebook advertising their e-books making the pitch: “Start reading with Walmart eBooks today and get $10 off your first purchase,” the ad suggested, accompanied by a picture of “Mein Kampf” with the genocidal leader’s face prominently displayed on the cover.

A Walmart spokesman issued a sputtering statement pleading: “this item has no place on our web site and it has been removed.” The spokesperson declined to explain just how exactly the gushing pro-Nazi blurb ended up on the corporation’s website in the first place. And what about that price?

Amazon, Barnes and Noble, and Books-A-Million did not respond to media inquiries. Amazon quietly removed the pro-Nazi review.

While Amazon corporate headquarters declares the marketing Goliath does not “promote, incite or glorify hatred, violence, racial, sexual or religious intolerance or promote organizations with such views” the company has a dark history of hate-promoting books, clothing and even toys.

Amazon’s culpability in the Mein Kampf affair is even worse, as the HuffPost reported: “The Amazon version of “Mein Kampf” that matched the price and description of the other retailers was published by CreateSpace, a self-publishing service owned by Amazon. White supremacist lawyer Kyle Bristow used CreateSpace to publish his racist work of fiction “White Apocalypse,” which is also available on Amazon.”

As a friend use to say, “If you believe in coincidence. you’re not paying attention.”

Consider that despite Trump’s bumbling, inefficient, corrupt and downright humiliating first term the Republicans and the 2020 presidential campaign are rolling in the dough: Trump campaign and RNC raised staggering $105 million in Q2 of 2019. This was on top of an already $100 million in the campaign coffers. The campaign is looking to raise $1 billion — and will undoubtedly reach the goal.

Where is that kind of big cash coming from? One place it is not coming from is the Vernon County Republican Annual Summertime Hate & Racism Corn Roast fundraiser.

Don’t be fooled by corporate America’s gay-friendly advertising campaigns or touting their programs to get women working in high tech or declarations of support for Black History Month or their occasional donation to a community nature garden. Look where their real money goes.

Corporate America is getting exactly what they want from their massive investment in Trump’s fascism, beginning with huge tax cuts for profitable stock buybacks to environmental and consumer protection rollbacks to massive arms sales. Hell, a war would be great for the quarterly profit statement! No doubt all those corporate smarty pants Harvard and Yale MBAs and lawyers think they can corral and contain Trump from his worst instincts. They are making the same mistake 1930’s German industrial smarty pants made.

Things like seeding the population with fascist friendly marketing and messages can normalize the abnormal to make it all go down easier … for awhile. But as the brutal border concentration camps and the Brown Shirt mentality of the Border Patrol officers on display with this week’s visit by a congressional delegation shows, one wheel is already off the road. No matter, corporate America is determined to cash in even as their fantasies of controlling the Gollum they have nursed into existence are about to go up in flames.

Link to the orignial HuffPost story and 4-minute Video.

(Commoner Call column and cartoon by Mark L. Taylor, 2019. Open source and free for non-derivative use with a link to www.thecommonercall.org )