“Refusing to leave would make him the crazy guy the Marines escort out of the building.”

— Conservative columnist Jonah Goldberg about concern over Trump not leaving the White House when it is time.

Trump is a nasty piece of work and a liar. But news first; there is persistent concern fueled by Trump that he will refuse to leave office when it is time:

“The good news is that at the end of 6 years, after America has been made GREAT again and I leave the beautiful White House (do you think the people would demand that I stay longer? KEEP AMERICA GREAT),” Trump wrote.

A serious concern? When held up against news about the Oregon state legislature the potential of an authoritarian disregard for the Constitution is amplified.

Columnist Charles P. Pierce offers this sub-head ahead of the specifics: “People with guns have involved themselves in a legislative dispute while the officials of one political party cheer them on.”

The crisis in the Oregon legislature started over proposed legislation by Dem Governor Kate Brown to address the threat of “climate crisis”. Every GOP member of the legislature left town denying Brown a legislative quorum, “effectively killing the bill”. But that is not the main part of the story.

“The Republican senators—with the full support of the Oregon Republican Party—made common cause with armed domestic terror groups. (Calling them a militia is a misnomer, regardless of what they may think of themselves.) When a Republican state senator named Brian Boquist heard that Brown was sending the Oregon state police after them, he told a local television station: “Send bachelors and come heavily armed. I’m not going to be a political prisoner in the state of Oregon. It’s just that simple.”

A militia group, the Oregon 3 Percenters, heeded the call and committing to “act as the senators’ de-facto bodyguards against the state police”.  The Idaho contingent of 3 Percenters waded in with “”“This is what the start of a civil war looks like,” the group wrote in one post. “Elected officials seeking asylum in a friendly jurisdiction.””

Oregon State Police recommended the “”Capitol be closed tomorrow due to a possible militia threat”” – and it was. An “Occupy The Senate” rally called for Sunday “fizzled”…

So now what? How will the Oregon legislature respond? Can anyone picture a Trump Department of Justice offering support? Is this a serious risk or do we dismiss this, chalk it up a MAGA ‘getting over’ on ‘libtards’, just right-wing good ole boys having a bit of fun?

The two stories taken together are a cause to pause.

Former special counsel Robert Mueller is now scheduled to appear in an open hearing before the House Judiciary and Intelligence Committees on July 17. He will testify about the Report resulting from his investigation of Russian interference in the 2016 election to benefit Trump, Trump campaign coordination or conspiracy and Trump obstruction of the investigation.

Rep. Mark Meadows (R-NC) says, “I just think it’s more political theater” and it is. The question is whether hearing directly from Mueller will move the needle in further favor of impeachment as it did with his only public statement made by way of a 9-minute press conference with no questions taken in May 2019.

I predict a mixed response – Mueller will not offer a definitive statement regarding the guilt of Trump or sufficiency for charges – on that front he will not stray beyond what is laid out in the Report. That said, there is power to Mueller’s statements in his own words even if it’s all laid out in advance.

Live-stream Volume II – The Investigation: A Search for the Truth in Ten Acts.

That’s right, there is now an easy and entertaining way to digest how Special Counsel Robert Mueller detailed Trump’s obstruction of the investigation and lied about the conclusions. The Mueller Report makes a solid prosecutorial case for Trump guilt over obstruction and this is a convincing presentation.

On Monday evening Law Works live streamed an enactment of Volume II – The Investigation: A Search for the Truth in Ten Acts. The live stream can be accessed through the Law Works FaceBook page. You can skip past the first 30 minutes ,which is a long intro ahead of the recorded live cast.

The performance was organized by Pulitzer-winning playwright Robert Schenkkan and is read by a cast including John Lithgow, Sigourney Weaver, Annette Bening, Kevin Kline and many more. 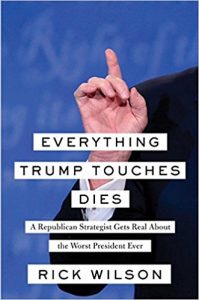 Back to the point about Trump’s many lies…

He is a liar and a perjurer… says Trump of former Trump White House Counsel Don McGahn. Sure it’s more convincing to presume that Trump is lying about McGahn having lied under oath, but why does he do this? The background on Trump’s disparagement of McGahn are about McGahn’s cooperation with Mueller. McGahn appears throughout the Report and is one of the star Mueller witnesses with thirty hours of testimony.

From the Report, we’ll use E. The President’s Efforts to Remove the Special Counsel (Vol. II, page 77) to illustrate the point, one of the ten instances of Trump obstruction investigated by Mueller. Trump is meeting with (then) Attorney General Sessions and McGahn when Sessions steps out of the Oval Office to take a call from (then) Acting Attorney General Rosenstein who explains his appointment of a special counsel, Mueller. Sessions returns to the meeting and advises Trump who responds: (Vol. II, page 78)

“Oh my God. This is terrible. This is the end of my Presidency. I’m fucked.”

Trump persistently demanded that McGahn intercede and have Mueller removed. After enough demands from Trump, McGahn finally decided he had to resign. In calls with both former Chief of Staff Reince Priebus and former Trump senior adviser Steve Bannon McGahn said, “that the President had asked him to “do crazy shit”” and that he “intended to resign”.

In advance of McGahn eventually testifying before a House committee, who do you believe?

Everything Trump Touches Dies. Trump now lies and attacks McGahn as a perjurer – fascinating given McGahn is a rare stand-up guy in the history of Trump’s administration of grimy grifters.

A Politico report now has Trump “tiring of Mulvaney” and is publicly airing his grievances. You can see the “cough” outtake from the ABC news interview with Mulvaney being told “if you’re gonna cough, please leave the room”.

But maybe this is more at the core of Trump’s problem with Mulvaney:

“Mulvaney and his top aides have stacked the West Wing so far with 11 loyal staffers from the Office of Management and Budget, where he previously worked. Additionally, he has used Camp David — typically a getaway spot for presidents, not staffers — to host three different retreats with White House senior staff, top health care officials and congressional lawmakers. This, combined with his tendency to load up Air Force One trips with favored administration aides, has made him a target of criticism among some West Wing staff.”

In the den of thieves and cutthroats that is Trump’s West Wing we’ve learned – if you get ahead of yourself the Trump loyalists will invoke Wilson’s prediction of ‘death’ by association.

If you are a GOP grifter outside the White House, feel free…

Hunter (R-CA) used “$250,000 in campaign funds for personal use”. Hunter’s wife has already pleaded guilty, but new news says that some of the money was “spent to pursue a series of intimate personal relationships.” Hunter says all of this is prosecutorial bias”, sounding suspiciously like someone else’s continual bleating about “witch hunt”.

The lesson learned – outside the White House it’s a free for all with GOP grifting and threats from right-wing militia.

But inside the White House, serious grifting and graft is reserved for Trump family profit and entertainment. A family hobby, if you will. Anyone overstepping will be dealt ruined – deserved or not.

Meanwhile — despite the mounting evidence — the number of House Reps calling for Impeachment is (only) up to about 80.