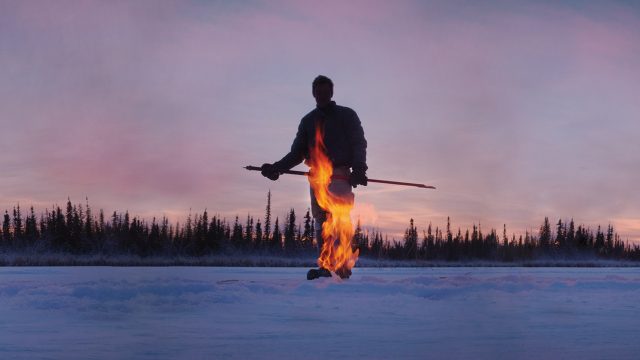 “We have the solutions at hand. But the question still remains, can we mobilize and take collective action before it’s too late.”

[Editor’s Note: The first 30 minute or so of this excellent movie outline the status of the climate crisis. After that they begin looking at possible interventions. — Mark L. Taylor]

Produced by Oscar-winner Leonardo DiCaprio, George DiCaprio and Mathew Schmid and directed by Leila Conners, Ice on Fire is an eye-opening documentary that focuses on many never-before-seen solutions designed to slow down our escalating environmental crisis. The film goes beyond the current climate change narrative and offers hope that we can actually stave off the worst effects of global warming.

Eleven years after Conners’ first collaboration with DiCaprio on The 11th Hour, which emphasized the problems of climate change, Ice on Fire instead focuses on the cutting-edge research behind today’s climate science – and the innovations aimed at reducing carbon in the atmosphere, which could pave the way for a reduction in the global temperature rise and a benefit to the planet’s life systems.

‘Ice on Fire’ finds that while the risks and urgency may be higher than ever today, there are also greater opportunities for innovative solutions, offering a realistic but hopeful perspective on a key global issue that demands our attention.

With sweeping cinematography of a world worth saving, Ice on Fire was filmed across the globe, from Norway to Alaska, Iceland to Colorado, Switzerland to Costa Rica to Connecticut. The film highlights firsthand accounts of people at the forefront of the climate crisis, with insights from scientists, farmers, innovators and others.

Ice on Fire emphasizes the importance of an immediate, two-pronged approach to reversing the crisis: reducing carbon emissions through traditional renewable energy sources and new ones, like tidal energy, and implementing “drawdown” measures, focusing on methods for drawing down and sequestering carbon, including direct air capture, sea farms, urban farms, biochar, marine snow, bionic leaves and others.

While much of the political and economic focus has been on the energy sector, the film points out that drawdown (pulling CO2 out of the atmosphere and oceans and sequestering it underground or into new materials) is perhaps the best hope for mitigating climate change. …

Read the Rest and Link to 1-Hour, 38-Minute Video

Our Conversations with Great Minds series re-launches with a fascinating discussion with author Dahl Jamail, author of “The End of Ice”. The world is melting; oceans are rising, yet most ignore the perils ahead. Thom and Dahl’s conversation covers the state of the Great Barrier Reef in Australia, melting glaciers which could drown the planet and whether it is too late to reverse climate change. Has humanity destroyed itself?

Link to Story and 19-Minute Video