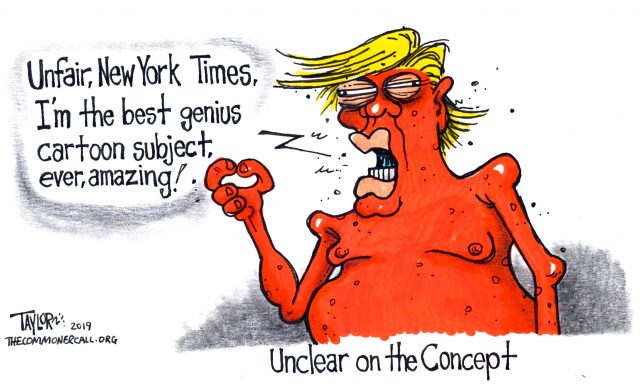 In a world where political cartoonists are routinely jailed, the paper should show more courage.

What does a newspaper do if it publishes an antisemitic cartoon? Determine that it won’t do so again? Or stop publishing cartoons? The New York Times appears to have taken the second route.

In April, its international edition (which is distinct from its US edition) ran a syndicated cartoon by the Portuguese cartoonist António Moreira Antunes that depicted the Israeli prime minister, Benjamin Netanyahu, as a guide dog leading a blind Donald Trump wearing a yarmulke.

Often, they cross the line. But they can also expose power and pomposity with a clarity and sharpness unique to a cartoon.

It was widely condemned as antisemitic. The NYT published a long apology and decided to end all syndicated cartoons. On Monday, it announced that it was dropping all cartoons, syndicated and in-house, from its international edition. The newspaper did not deny that the decision was linked to the furore over antisemitism, but insisted that it wanted to bring the international edition in line with the US edition, which abandoned political cartoons some time ago.

Cartoons are at the cutting edge of free expression because they are dangerous. …

“Cartoons can jump over borders. Who will show the emperor Erdogan that he has no clothes, when Turkish cartoonists can’t do it ? – one of them, our friend Musa Kart, is now in jail. Cartoonists from Venezuela, Nicaragua and Russia were forced into exile. Over the last years, some of the very best cartoonists in the U.S., like Nick Anderson and Rob Rogers, lost their positions because their publishers found their work too critical of Trump. Maybe we should start worrying. And pushing back. Political cartoons were born with democracy. And they are challenged when freedom is.”