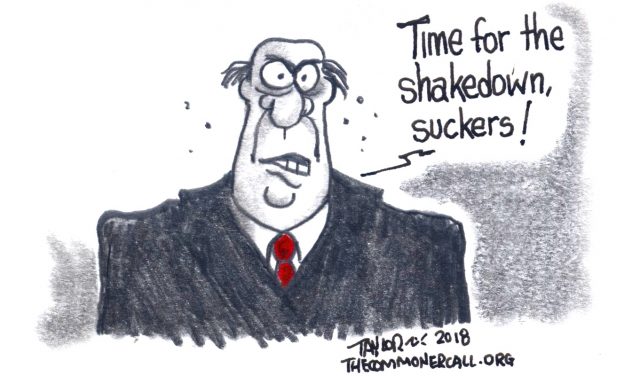 With the billionaire Koch brothers reportedly considering spending big money to help protect conservative Democrats from left-wing primary challengers in the 2020 elections, progressives said the oil magnates’ efforts can only be thwarted by a grassroots mobilization dedicated to a bold alternative agenda.

Justice Democrats—an advocacy group that is backing progressive primary challengers against corporate Democrats—said in an email to supporters on Tuesday that “we have to fight back with everything that we have” against the Koch brothers, whose political network spent tens of millions of dollars backing Republicans candidates over the past several election cycles.

“While we might not have millions of dollars from fossil fuel barons or wealthy elites,” Justice Democrats said, “we don’t need or even want it—we have thousands of grassroots activists who are motivated by the vision of a just future for all.”

In a memo (pdf) released last week, the Koch-funded PAC Americans for Prosperity signaled a willingness to support Democrats who favor its right-wing agenda in the upcoming elections.

“The only way we will stop them is to build a grassroots progressive campaign that rejects their right-wing ideology.” —Sen. Bernie Sanders

GQ contributor Luke Darby wrote in a column on Monday that the “Kochs and other libertarian billionaires have probably realized by now that centrist Democrats—self-described liberals who support tax cuts, deregulating industries, and privatizing public services—are more reliable allies than ambitious and popular progressives with a concrete political agenda.”

Marie Newman, who is mounting a progressive primary challenge against anti-choice Rep. Dan Lipinksi (D-Ill.), said in a fundraising email Tuesday that “it looks like the Koch brothers are flying in to help save” her opponent.

“What this news tells me is these guys are running scared,” said Newman. “They’ve seen the data, and they’re convinced we will win… if they don’t intervene. Their only hope is to spend millions to drown us out.”

How the national dems help the Kochs

In addition to potentially running against candidates backed by a flood of Koch brothers cash, progressive primary challengers also must contend with the Democratic Congressional Campaign Committee’s (DCCC) blacklist policy, which cuts off support to vendors who back primaries against Democrat incumbents.

“This is what we’re up against—not just a DCCC blacklist, but Koch Brother meddling in our primaries too,” said Justice Democrats, which has endorsed Newman.

“Just think about it: why, for the first time in history, would the Koch Brothers be so scared about the possibility of passing progressive policies that they’ve decided to potentially dump millions to protect these corporate Democratic incumbents?” the group wrote. “Our message is working and it’s resonating with millions of Democrats and millions of Americans. We have to keep up the fight, because in the end, we will win.”

While the Koch network has not said how much it plans to spend in 2020, Sen. Bernie Sanders (I-Vt.)—a Democratic presidential candidate—warned in a tweet on Monday that the billionaire brothers “are preparing to try to buy the Democratic Party and buy the 2020 election.”

“We cannot let them,” Sanders said. “The only way we will stop them is to build a grassroots progressive campaign that rejects their right-wing ideology.”

In an email to supporters on Tuesday, Sanders wrote, “This isn’t personal for me. I don’t know the Koch brothers, but I do know this: one of the most significant realities of modern politics is just how successful they have been at moving the Republican Party to the extreme right.”

“Now they will try to move the Democratic Party even further to the right,” said Sanders. “And the only way to stop them is to build a grassroots progressive campaign that rejects their right-wing ideology.”